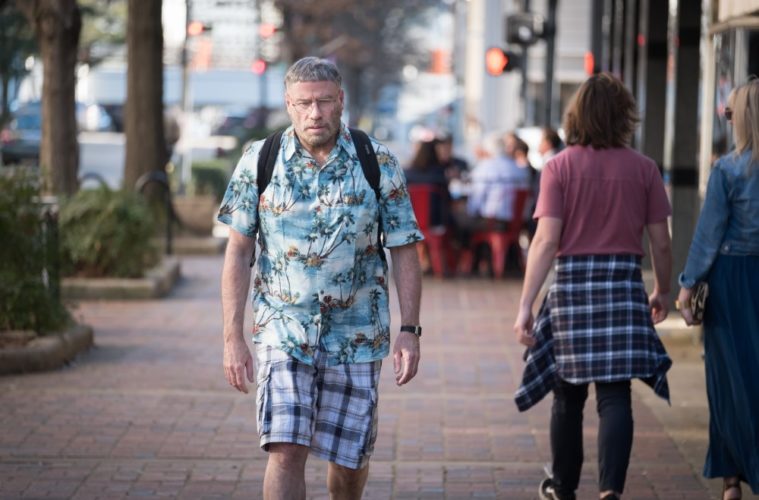 Over shots of Los Angeles, Fred Durst’s The Fanatic opens with an apathetic diatribe about the soul-sucking nature of the City of Angels. It’s a“city of bullshitters,” as our cynic tour guide puts it–assuring us that, over the next 89 minutes, this plunge into toxic celebrity worship is more symptomatic of a rotten societal core than it is a misguided rejection of developmental disorders and narrative proficiency.

Sure enough, we then meet Moose, portrayed by a John Travolta seemingly intent on convincing audiences that a surplus of tics make a performance compelling. Moose is an uber movie fan, obsessed with film star Hunter Dunbar (Devon Sawa) and intent on meeting and befriending his action hero, at any cost. Sure enough, Moose’s tendencies lead him into a series of increasingly detrimental situations that both jeopardize Hunter’s career and reveal the depths of Moose’s fixations and capacity for violence. So, we have a film aspiring to be akin with Nightcrawler, but swap nightly news bloodlust for toxic celeb worship… and therein lies the rub.

A film like Nightcrawler works because it shows a man who lacks some social normalities—and who has psychotic tendencies—carve out a niche for himself in a profession that is actually fueled by people who share his ruthless and driven nature. It’s equally about an America both repulsed by and, much more importantly, enticed by a perverse, rubber-necking bloodlust. Check out that car wreck, but god forbid that happens to us, honey… but did you see the way that body was all mangled?

With Limp Bizkit lead singer’s latest directorial effort, however, Moose’s lack of social nuance seems to create all of his issues, and, by extension, his tendency toward violence. From the beginning, then, this creates troublesome implications. While there is an overriding (and directly spoken) thesis on how LA rots the soul, the narrative trajectory leaves one left with a feeling that Moose is the problem, and that his acts of violence stem more from his own ineptitude than from some rotten, stinking core of the city.

Moose is bullied, yes, but his continual return to Dunbar’s house still seems more driven by his inability to grasp boundaries and the separation of fandom and life, rather than by a direct act of rebellion against the elite movie stars or against those who oppress him. This leaves the diagnosis that celeb obsession is toxic and that perhaps LA—and America writ large—breeds a culture of awe-struck fixation on celebrity culture that causes us to ignore vital issues such as mental health so that we can keep up with the Kardashians. Unfortunately, this feels more like a footnote, especially when there doesn’t seem to be any broader engagement with the topic beyond the way we follow Moose’s own obsessions.

It’s all quite tone-deaf and, even when Durst lingers on the impact of Moose’s violence—as well as the violence inflicted on him—the overall tonality of The Fanatic feels confused. This has a lot to do with Durst’s lexical treatment, as much as it has to do with the film’s overall sneering perspective on Moose and Travolta’s overcompensation at every turn. Really, it cannot be overstated how absurdly apeshit Travolta goes at every moment, and how he becomes totally impenetrable on any empathetic level as a result.

At one moment, Moose obsesses over how he will introduce himself to his idol and, more importantly, how he will say something “different” to him to stand out. He practices his introduction in the mirror, stuttering and repeating himself. Sad music plays over this display which, when coupled with Durst’s detached visual treatment and Travolta’s whacky performance, creates an insurmountable gap between the lead and the viewer. So, instead of being inside his house alongside him, we instead feel as though we are spectators to some sort of “sick and perverse” showcase put on by someone we’d be better off not meeting.

It’s profoundly troublesome to turn a behavioral profile into a gaudy, freakshow display. Perhaps not on purpose, but through a misled approach to material that is already stricken with ill-advised ideology and half-considered notions of social truths. In reality, it feels like the intent was just some real twisted shit to be repulsed by. At the conclusion, an utterly perplexing bit of dramatic irony solidifies that ideology and ideas have taken a firm backseat in a film engineered to continue rollin’ into mediocrity. If you enjoy hooting at corrosive and inept cinema that is neither worthwhile or giddily reprehensible then you might have found a new subject for fanaticism.

The Fanatic opens in theaters on August 30 and VOD on September 6.