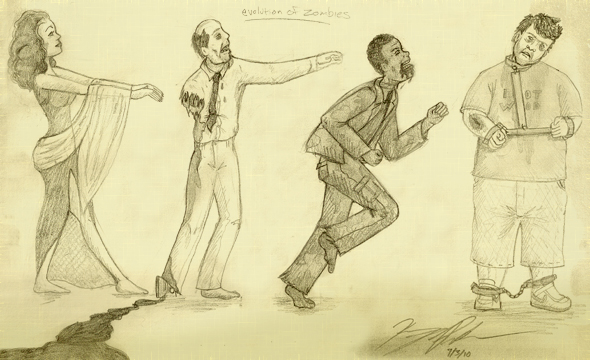 The Evolution of Zombies

Admittedly, I am obsessed with zombie movies. I talk about them with a level of pretension and fervor most people reserve for discussions of fine wine or jazz. This may be because I am a sucker for some good gore, or because I spend an inordinate amount of time pondering the sociopolitical ramifications of the horror genre – in which zombie flicks play a huge role, or it may be because my hometown is featured in George A. Romero’s Dawn of the Dead– but my motivation is beyond the point.

The point is that, as an avid fan of zombie movies, I take them very seriously. To that end I’ve broken down my favorite sub-genres within its cycles to present to you The Evolution of Zombies. Evolution of Zombies by Kristy Puchko

In the beginnings of the genre, zombies are dead but vague in concept. They walk about in a creepy manner and have no control of their actions. Not surprisingly, most early zombies of note are women – more specifically white wives. Race is a recurring theme with two of the era’s most notable films taking place on plantations in locales known for racial strife. In Haiti, a white lady, Madeleine, is turned into a zombie by a Voodoo master (played by Bela Lugosi) and forced to wed a wealthy plantation owner. She’s a mindless woman – essentially dead – who obeys her master’s every whim. Like the poster declares:

She was not alive…nor dead…just a WHITE ZOMBIE performing his every desire!

Other white zombies appear in the film but they are subjugated to slave/minion status beneath Lugosi’s voodoo powers. When the evil Voodoo master and the domineering husband knock each off a cliff, the white zombie bride awakens from her zombiness and returns to her true love. Hooray!

I Walked with a Zombie (1943) ~ directed by Jacques Tourneur

Again we have a white woman with a plantation backdrop in an exotic locale. Betsy arrives on the Caribbean island of Saint Sebastian, a land haunted by its slavery history. Betsy plays nurse to a plantation owner’s wife, Jessica, who walks around like a zombie. A Western doctor diagnoses her with a sleepwalking disease brought on by the tropical climate, but the natives believe she’s cursed because she loves one man but is married to another.

Ultimately, Jessica is revealed to be a zombie. And neither Western medicine nor voodoo can cure her. So Jessica’s tormented lover takes her to the sea where they drown together. And Betsy ends up with the cuckolded husband. Um…Hooray?

Here the first zombie presented is a white wife, but the genre’s beginning to shift as her husband is not the string-puller – he’s a zombie! And played by Bela Lugosi! This time around it’s aliens who are using the dead as puppets – to destroy the earth! Similar to White Zombie, destroying the zombie’s master ends their hold on the undead (like in some vampire lore) – but, like I Walked with a Zombie, there is no cure for being undead. So when the evil aliens are defeated, the zombie hordes become “skeletonized.”

After these crude constructs, zombies went on to appear in varying primitive states in B-movies, Grindhouse flicks and exploitation films. They didn’t become a staple of American horror’s mainstream until George A. Romero. Zombihood is no longer relegated to white women/men. Anyone can be a zombie now!

Romero ran with the racial themes established in the primitive era and added themes of consumerism, evils of technology and distrust of authority. He took the genre seriously and inspired a thousand imitations.

This is the movie that started it all. A motley crew of strangers are thrown together when the dead rise and tirelessly prey on the living.

In a nod to his predecessors, Romero centers the film on a terrified white woman, Barbara, who is doggedly pursued by the undead from the first scene. Unlike the former, the locale here is the far from exotic, rural Pennsylvania. Barbara seeks sanctuary in a farmhouse peopled with refugees: a family of three, a young couple and a lone man, Ben, notably the only black character. Unlike the past films where black characters served only as a backdrop to bolster the “exotic” atmosphere, here Ben is a hero. He plans the escape attempt, he fights off zombies and he hands out an ass-whooping when needed. Most importantly, while all the others fall prey to the zombies, Ben makes it through the night. Too bad zombies aren’t the only dangerous things in Romero’s world.

The sequel shot a decade later takes place the following morning in a new (though still Pennsylvanian) locale. Zombies are causing chaos, and the government is powerless to help. Society is crumbling so a diverse group of Philadelphians flees via hijacked helicopter to rural PA – anticipating lower population equals fewer zombies. This lands them in a shopping mall outside Pittsburgh, a setting ripe for Romero’s sociopolitical critique. Turns out zombies love the mall. More gore and more human brutality, make this the most popular of the trilogy. Here, another heroic black man, SWAT team member Peter, survives the dawn along with a pregnant white woman. Together they head into an uncertain future.

Following the Dawn, white woman, Sarah, arrives via helicopter with fellow survivors in Fort Myers, Florida. But these aren’t civilians; they are a military-related research team seeking survivors and a cure. Zombies are brought into a military bunker for inhumane “human” testing, to Sarah’s dismay. She soon finds a group arguing zombies can be trained and can evolve. These two factions collide, resulting in much zombie violence and gore, and Romero leaves his audience with a message about humanity’s lack thereof. Notably, another white-woman-black-man combo survives the mayhem.

Rarely does the ruling class of white men make it through a Romero movie.

Romero’s rules became zombie dogma, and remain the most popular canon of zombie lore. Ahead of his time on diversifying casting, he bolstered the sociopolitical subtext of the genre, while making it a genre in which everyone can play a part, ultimately underlining his message of rebellion.

Zombies are revamped as fast-and-furious carnage machines – and they are no longer dead. Feeding on fear of biological attack from unexpected enemies, they now are “infected persons,” victims of a rabies-like disease that inflames their brain making them animalistic and aggressive…and craving human flesh. Obviously. 28 days later, the world has devolved. A small group of survivors (two male, two female, three white, one black) seek solace, discovering much human cruelty on their course through zombie-infested Manchester, where a military installation has become a house of horrors.

In this film, the hero falls in line with Hollywood convention – he’s white and male. Though a black female also has a prominent role, and both survive, the genre has shifted to the studios, and lost some subversion along the way.

Based on the popular video game, Resident Evil focuses on a viral outbreak within an evil corporation’s research lab. A group of confused amnesiacs wonders through the locked-down facility coming across a slew of wily zombies in-line with the infected persons ideology. They are ravenous and chase the diverse cast, who seek salvation. Only a white woman, model Milla Jovovich, makes it through to the sequel. Here, zombies are bad, but corporations are evil, maintaining the Romero battle cry, though diluting it with casting.

{Quarantine is based on the Spanish zombie movie, [REC], but as this article focuses on trends in American cinema, I’ll be discussing the remake. }

The film follows a young white female reporter and her protective black cameraman through a night of horror and cannibalism. Like its predecessors, a motley and diverse crew is trapped, this time in a quarantined apartment complex, when a virus outbreak turns people rabid. Again zombies are speedy and tireless, and trusting in authority will get you killed. Feeding on the fear of terrorism, all kinds of people are affected/infected. However, no one is this movie ever attains hero status, and the film’s protagonist harks back to the primitive stage, as she is a shrieking white woman who runs around terrified for much of the film. Iconoclast fail.

Like Romero’s films, the gore is heavy but the pace of the films and the zombies are faster, though a deep distrust of authority still runs strong. The baroque zombie films are more action, less horror, revealing an angling for larger audiences. Thereby these films more closely follow Hollywood casting trends, and so people of color fall into sideline characters, which ultimately weakens the classic era’s message of rebellion.

Toying with audience expectations, zombies are still scary and covered in gore, but are also good for a few laughs. The first zom-rom-com writers, Edgar Wright and Simon Pegg, combined their favorite elements of the Richard Curtis romantic comedies with George Romero’s zombie horror trilogy. The result is a movie centered on Shaun, a man who may as well be dead with the rut he’s made of his life.

Like Romero, Wright and Pegg posit zombies as allegory – in this case for the drudgery of day-to-day life. Shaun is so used to his routine that he doesn’t notice that his neighborhood has been overrun by the undead. When he and his similarly stilted roommate do catch on, they team up to save their loved ones with techniques we’ve learned from watching zombie movies. The first successful entry into the parody stage, Shaun is in turns touching, funny and scary, taking the genre in a new direction. However, it falls short in diversity casting, which may be due to its romantic comedy roots.

In an idyllic 1950’s setting, radiation has turned all the dead into zombies. Unlike other zombie films, this world’s society does not fall into shambles – thanks to American ingenuity! Zomcon has created collars that make zombies slaves, curbing their instinctive brain cravings. Troubles arise when a young boy, Timmy, becomes attached to the zombie his mother brings home, whom he names Fido. The film is a satire with a largely white cast, which actually suits the film’s criticism of homogeneous societies. Here zombies are the stand-ins for the oppressed classes, calling back to the primitive stage.

The most recent zombie parody, Zombieland smashes together elements from the coming-of-age story with the road trip movie with zombie horror with an indie twist.

Here tainted burgers turned humans into zombies, well – infected persons. The revised zombie ideology is honored and mocked as the protagonist explains zombies run – so cardio is key to survival. The role of quirky white boy, a protagonist more accustomed to indie comedies, is filled by offbeat indie poster-boy Jesse Eisenberg. He toddles through the dangerous terrain with an aw-shucks demeanor, as he comes across a bad-ass living out fan-boy fantasy as a top-notch zombie slayer, and a pair of femme fatale sisters, just edgy enough to make a nerd boy blush. There is gore, laughs, a love story, and a lily-white cast. Apparently parodies have no room for black sheriffs anymore.

Like many parodies, the zombie genre loses some of its identity when combined with others. A genre that Romero defined with violence, allegory and diversity, falls subject to Hollywood trends when it becomes widely embraced. In this case, it gets pretty thoroughly white washed, and subversion and rebellion take on forms new to the genre: satire and modern indie film conventions.

Ultimately, the zombie genre has evolved to a place where each of these stages co-exists. Whether it be the schlocky exploitative horror of Zombie Strippers, the new or remade Romero films, the emergence of baroque sequels (28 Weeks Later, Quarantine 2, the Resident Evil trilogy), or the upswing of zombie comedies (coming soon: Breathers: A Zombie’s Lament, and Pride and Prejudice and Zombies), the zombie genre has got something for everyone.