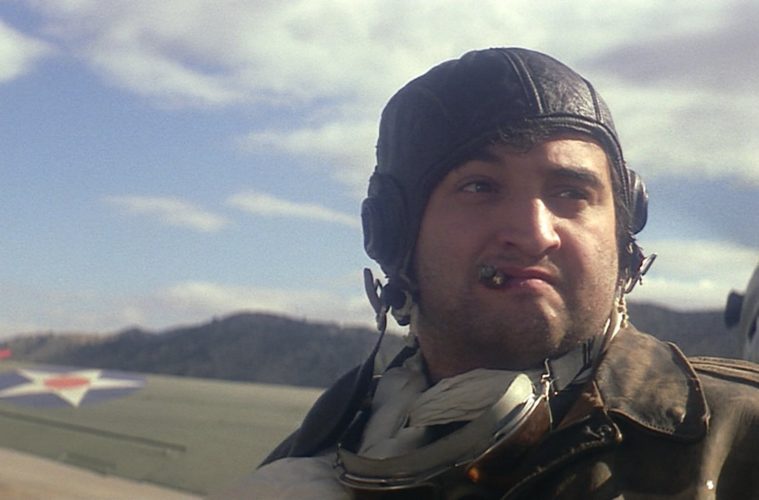 The Dance of Reality in Steven Spielberg’s ‘1941’ Even 38 years later, you’d think that simply the quick subtitle of “December 13th, 1941” would be enough for most audience members to be reminded that it’s the week after the bombing of Pearl Harbor and, furthermore, the subsequent entry of the United States into World War II. Yet, as told through an intertitle, even semi-recent history is being made over to resemble something closer to Star Wars. Given the ensuing (and strange) sight of World War II being fought in Los Angeles instead of a cold German winter, a rubble-strewn Italy, or a Pacific Island, we’re only further removed from a notion of the real and plucked into fantasy.

Not helping matters is an enormous ensemble, including famed Army General Stilwell trying his best to contain a public on the verge of hysteria over another possible Japanese attack, the attempted wooing of his plane-obsessed secretary by a horny Captain, the conflict between a serviceman and a dishwasher — who share both strikingly thick eyebrows and an interest in the same girl — an invading Japanese sub containing both Toshiro Mifune and Christopher Lee, the installation of an anti-aircraft gun in the backyard of a Santa Monica home, and, last but not least, the permanently hungover John Belushi as rogue pilot Captain Bill Kelso, about whom we know all that’s necessary when a character introduction ends in him unintentionally blowing up a gas station.

While this sounds more like one of the genre-plays of Robert Altman — and it does, in fact, share at least the Mad Magazine diaspora of The Long Goodbye — 1941 is instead the work of a far different luminary of ’70s American cinema: Steven Spielberg. The abnormality of this film within his career, being considered by more than a few as his first outright failure, places it amongst New Hollywood flops such as Scorsese’s New York, New York, Cimino’s Heaven’s Gate and Coppola’s One from the Heart. As the widely perpetuated history goes, each of these pictures failed to connect with the public on account of the deadly mix between homage and pomposity — in so many words, the creator’s ambitions getting in the way of proper creative flow. Just how much this ego was afforded by success becomes visible in the fact that 1941 opens with a direct reference to Jaws, with the substituting of a shark for a Japanese submarine. Even the populist of the New Hollywood group wasn’t innocent.

Yet when assessing an American cinema quite comfortable making dramatic narratives out of the Vietnam war (as evidenced by the Academy Awards thrown toward The Deer Hunter and Coming Home), 1941’s comparatively childish blockbuster tendencies certainly made it a target. Even in his first World War II drama, Empire of the Sun, Spielberg couldn’t totally escape certain labels as Hollywood’s great boy who never grew up, for it still had war seen through a child’s perspective. But to differentiate the “juvenilia” of Empire of the Sun and 1941’s is easy: whereas the beginning of the former film sees its child protagonist separated from his parents because he dropped a toy, the latter is equivalent to a very hyperactive little boy with likely a few too many trinkets at his disposal. Consider this proverbial child kin with the film’s only instance of kids, the brood of Ned Beatty’s hopeless middle-class patriot: laying traps for unsuspecting adults or pickpocketing sleeping soldiers the morning after the film’s climactic battle, and likely one of the very few examples of malicious children within Spielberg’s oeuvre.

The next film he’d make that would draw similar ire for its chaotic nature would, of course, be Indiana Jones and the Temple of Doom, the notorious sequel that brought its predecessor’s darker implications to the forefront, chiefly in terms of violence. For every claim of Spielberg’s empathy, there still lies his mean-spirited tendencies. Outside of a disaster-obsessed mind à la Roland Emmerich, what director can claim to have killed as many onscreen as he? After counting every massacred henchman in an Indiana Jones picture, dino or shark chow in a monster classic, or gunned-down faceless soldier in a war epic, Spielberg must seem like one of the great nihilists rather than the modern Capra.

The difference with 1941 is that it’s the most outright cartoonish of all his titles, carrying the logic of characters who can’t die no matter how much violence is inflicted their way. In fact, the number of pratfalls suffered by the variety of characters, both central and extraneous, is so great that it almost begins to function as a kind of anti-comedy. Perhaps the reason why the film dedicates an extended amount of time to cutting back to Gen. Stilwell’s awe at a screening of Disney’s Dumbo throughout the middle act is because the world outside him is the rival Looney Tunes: a nightmare of constant slapstick without any of Disney’s usual sentiment. (One of the chief images we see projected is Dumbo and his mother, which reduces Stilwell to tears.)

Yet if everyone’s a grotesque caricature (as further evidenced by the end credits, which features almost every member of the film’s enormous ensemble screaming), then does this America even deserve to defeat the Japanese? Dan Aykroyd’s propaganda-machine soldier Sgt. Tree, with his recurring line about the one thing he hates most (seeing Americans fighting other Americans), articulates the savage irony running throughout the film. It’s likely what caused right-wing icons like John Wayne and Charlton Heston to angrily turn down the role of Stilwell.

His following World War II dramas were considered, by some, a penance for 1941’s supposed mockery of history, be it the starkness of Schindler’s List or assaultive “verisimilitude” of Saving Private Ryan. Yet the so-called “definitive” air of each film’s images are still born out of other works, be it Schindler’s art-house, matter-of-fact black-and-white photography and master-shot-captured violence, or Private Ryan’s classical male weepie / Fuller-esque camaraderie. Perhaps 1941’s advantage over all these films is that its actual theme is images, here channeled to communicate the purported decency of Americans, a fear of the Japanese, or even the pursuit of fame, with a contest reward of a 7-year contract at RKO. One of Spielberg’s protégés (if you dare call him that), Michael Bay, would later do his own iteration on 1941, though instead of a historical farce (which it unintentionally came to be), Pearl Harbor was a stab at the kind of prestige that blockbuster-gone-Oscar directors such as Spielberg and James Cameron had attained. Instead of treating a love triangle as the ultimate symbol of America’s lost glory, Bay’s disingenuously earnest film could’ve benefited from the upfront misanthropy of his Pain & Gain: mocking the idiocy that both fuels and is produced by the conception of the American dream, much in the way of Spielberg’s film.

If Bay was somewhat a victim of his new-millennium-epic requirements, Spielberg similarly got stuck in one-upping his past hits. Case in point: the spectacular jitterbug setpiece — which likely any other director would seem content with having as the climax of their film — evidences that the true conflict of 1941 isn’t between the Americans and the Japanese, but instead the old-fashioned spectacle of the body and motion versus the new kind of machinery provided by folks over at ILM.

That each even have their own respective soundtracks — pop for the former, artillery for the latter — speaks to how Spielberg wished to turn the film into a musical, a genre itself analogous to the action-adventure picture. Just think the set-pieces of a Busby Berkely film, in which the rows of dancing girls often form a greater shape, all while showcasing real human bodies — that’s the kind of spectacle less and less common in the wake of the blockbuster. It seems a bit telling that the aforementioned New Hollywood failures One from the Heart and New York, New York were musicals; even the self-indulgence of Heaven’s Gate is signaled pretty early on by an extended dance sequence containing hundreds of extras.

In a 1980 interview with Chris Hodenfield that essentially functions as a post-mortem of 1941, Spielberg confesses to both his sizable ego after the success of Jaws and Close Encounters of the Third Kind, as well as his occasionally juvenile sensibilities. Yet there comes a point in the conversation where he begins discussing his favorite films, one being Stanley Kubrick’s Dr. Strangelove. In articulating that film’s effectiveness, he pointed to how particular it was to the time: that while waiting in line to see it in its original theatrical run, his sister came to give him a letter from the Selective Service to report for his physical.

Whereas Spielberg admitted that, with 1941 and being a baby boomer, all the images he was confronting were out of past films, not the first-hand paranoia of war and annihilation that Kubrick faced. This perhaps points to why War of the Worlds remains one of his most dramatically effective films: the usual Spielberg sight of extraterrestrials instead recalls the images of 9/11, which were so very fresh in the minds of most American. This evidences the seeming paradox of Spielberg, who more often attains his most-personal vision through “popcorn” films. But if “war is hell” has long held dominion over “war is farce” as the dominant commercial form, one can only hope that the king of Hollywood will bear to indulge his inner-child one more time.