The Croods: A New Age Review: Animated Sequel Improves Upon Predecessor with a Vibrant World 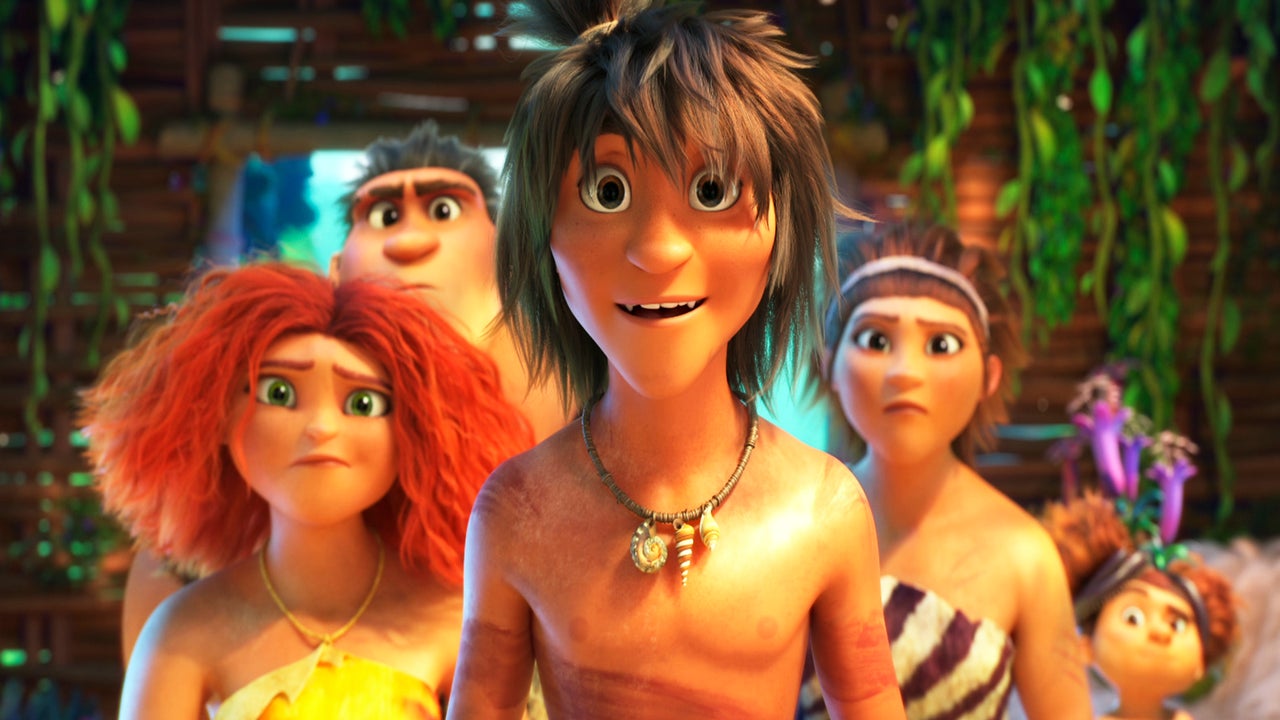 What does one make of an animated sequel to a hit that’s been mostly forgotten in the seven years since it was released? The Croods: A New Age, directed by Joel Crawford and stacked with celebrity voices (Nicolas Cage, Ryan Reynolds, Emma Stone, Peter Dinklage, Catherine Keener, Leslie Mann, Kelly Marie Tran, Cloris Leachman, Clark Duke), may not feel particularly anticipated or necessary, but damned if it isn’t a joy to look at and clever enough to pass the time. It’s a slightly back-handed compliment to be sure, but maybe that’s okay. Where the perfectly-cute original film worked in a lot of muted tones to match the Stone Age aesthetic, Crawford’s follow-up introduces a new world of colors that pop. This alone may be worthy of a watch, particularly for families seeking entertainment this holiday season.

As before, Cage is doing very funny voice work as Grug, the patriarch of the Crood bunch. Eep (Stone), his daughter, fell in love with loner Guy (Ryan Reynolds) in the first film and now Guy’s part of the clan, something with which Grug still struggles. In an attempt to keep everyone happy, Grug discovers an exciting new place full of food and shelter. The Croods soon learn that this place is inhabited by the Bettermans (Dinklage and Mann), a modern-thinking family who were once best friends with Guy’s long-deceased parents. The conceptualization and presentation of all of the forward-thinking gadgets available in the Betterman fort is one of the highlights of the picture, specifically a sequence with a toilet that earns a hearty chuckle.

As Eep puts ideas of rebellion in the youngest Betterman, named Dawn (Tran), Guy contrasts his past with his present, complicating his feelings for Eep. Meanwhile, Eep’s brother Thunk (Duke) becomes obsessed with the concept of a “window” and what lives inside the box that it creates. Bits like this are quick-witted and not overused, considering the format. And it cannot be overstated how refreshing it is that Eep and Dawn are not pitted against each other in some sort of love triangle in which two female characters compete for the affection of a man.

Without question, the animation and the kinetic sequences it allows are the highlight above all else. This picture feels designed for quarantined parents who need a 90-minute respite from their children. Along with a wider diversity of its color scheme, the plot moves much faster than it did in the first film, speaking to the increasing pace of everything we’ve all come to expect from our entertainment.

Along with the hyper-expressive Cage performance, Tran is a standout as a newcomer to this franchise. Her impressive supporting voicework here serves as some positive foreshadowing for next year’s Raya and the Last Dragon, in which she voices the titular heroine. This is a light, engaging adventure that never reaches the lowest common denominator bar that so much of mass-audience Hollywood animation falls preys to. Call the bar low if you like, but The Croods: A New Age delivers where it counts.

The Croods: A New Age opens in theaters on November 25 and on PVOD on December 25.