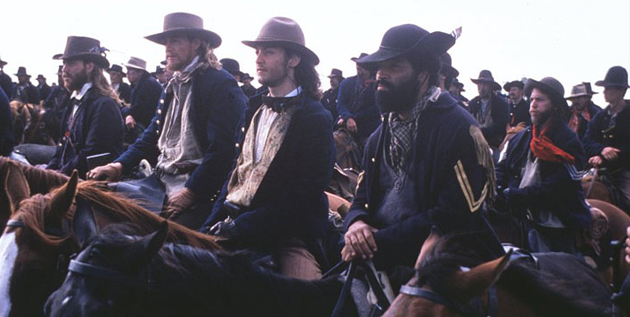 For a conflict that ended 150 years ago, the Civil War is red-hot. Lincoln was an Oscar-winning critical and commercial success, The Conspirator did well-enough for itself, and… well, Abraham Lincoln: Vampire Hunter was a thing.

The latest Civil War film to hit the big screen, Ronald F. Maxwell’s Copperhead, enters limited release this Friday (see here for a schedule), and, considering its director’s track record — Maxwell helmed the beloved Gettysburg and its well-cast but less-well-received prequel/follow-up, Gods and Generals — the blue-and-gray faithful should come out in full force.

Based on a novel by Harold Frederic, Copperhead tells the story of an upstate New York farmer (played by Billy Campbell) who is opposed to the war. (Such northerners were dubbed “copperheads.”) The cast also includes Angus Macfadyen and Peter Fonda. (Maxwell says he still plans to direct a film based on Jeff Shaara’s The Last Full Measure, which takes place after the events of Gettysburg; the latter film was based on The Killer Angels, from the author’s father, Michael Shaara.)

Civil War cinema has, of course, been with us since the silent era (e.g. Griffith’s Birth of a Nation), and that era in American history has remained the backdrop for numerous films of varying quality: Gone With the Wind, Glory, Dances With Wolves, Cold Mountain. The History Channel is probably airing a documentary on the war right now — and, if not, Ken Burns’ epic PBS documentary The Civil War is streaming on Netflix.

Those are the biggies, but, in light of Copperhead‘s release, here are a few Civil War films you may have missed:

Ride With the Devil

Ang Lee’s 1999 follow-up to The Ice Storm is one of the true oddities in his filmography; considering he directed The Hulk, that’s saying something. Like Copperhead, Ride with the Devil turns its gaze on a less well-known part of Civil War history: guerrilla warfare. It is a fascinating subject that made for an interesting, well-intentioned film. But it bombed, badly, while its stars (Skeet Ulrich and Tobey Maguire) saw their careers rocket in opposite directions. (Much of the prerelease hype focused on costar / musician Jewel, anyhow.) Critically, Devil was somewhat neglected upon release, but its reputation has grown in recent years, thanks in large part to a 2010 Criterion Collection release.

Where to Watch: Amazon, Netflix and Hulu

John Frankenheimer helmed this gritty prison drama during that period in the 1990s when he was mainly working in television, with the 1996 feature airing on TNT. Andersonville was nominated for multiple Emmy Awards (taking home one), and remains a compelling look at a grim subject.

Where to Watch: Amazon, Netflix (DVD)

The Red Badge of Courage, The Horse Soldiers, and The General

Okay, so none of these three are what one would call obscure: 1951’s Courage was directed by John Huston and 1959’s John Wayne-starring Soldiers by John Ford, while Buster Keaton’s The General is widely considered one of the finest films ever made. But when was the last time you watched any of these? If it’s been a while, all are worthy, especially 1926’s The General and Courage, which stands out for being the focus of Lillian Ross’ Picture, a classic fly-on-the-wall look at the filmmaking process.

Where to Watch: The Red Badge of Courage and The Horse Soldiers are available on Amazon; The General can be seen on Netflix and Hulu

Robert Enrico’s 1962 adaptation of Ambrose Pierce’s classic short story remains a classic featurette to this day. Known for its twist ending, the tale of a Confederate prisoner on the verge of being executed won an award for Best Short Subject at the 1962 Cannes Film Festival, and also took home an Oscar for Live Action Short Film in 1963. Heck, it even aired as an episode of The Twilight Zone.

Yes, The Beguiled was a Clint Eastwood–Don Siegel collaboration, but this is not Dirty Harry territory. Instead, the 1971 drama is set at an all-girls boarding school during the Civil War. The arrival of a wounded Union colonel, played by Eastwood, is a fascinating creation, and a bold choice by its director & star.

I’m cheating a bit with this one. Cross the Green Mountain is an original song written by Bob Dylan for the 2003 Gods and Generals soundtrack, and its accompanying video is a strange mix of movie clips & shots of Dylan looking like Jack White’s grandfather, sporting what appears to be Brad Pitt’s hair from World War Z and one of Leonardo DiCaprio’s suits from Django Unchained. At three minutes and fourteen seconds of campfire strangeness, it is hard to top for condensed CW entertainment.