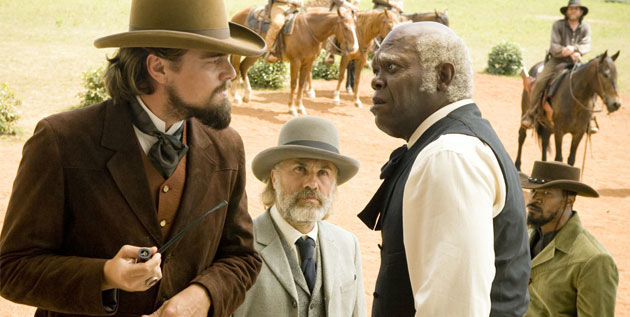 Here’s the first 2012 wrap-up feature where all praise goes to the casting directors. Some films have trouble nailing down a single, talented A-list star, but today we’ve got ten examples of films that go above and beyond when duty calls. Below you’ll find ten films in 2012 that showcase the best examples of not only great acting, but stellar ensembles that work sublimely together. Check out the rundown and let us know your favorites in the comments.

Argo takes the framework of a heist film and applies it to an intense geopolitical nightmare to create a fast-paced, engaging story about the magic of Hollywood and the power of a really well-told lie. Ben Affleck controls the madness as the straight man at the center, John Goodman fills out the role of the stolid but tired old hand, and Alan Arkin is the slick-talking wildcard. With solid and assured work from Bryan Cranston and Kyle Chandler as the government higher-ups in charge and a who’s-who of character actors beyond naming (Rory Cochrane, Scoot McNairy, and Clea DuVall just to name a few) playing the hostages, the deck is loaded firmly in this film’s favor even before you get into the thrilling plot. – Brian R.

It’s not enough that Robert Pattinson proves his genuine acting chops with David Cronenberg‘s latest, but he’s also surrounded by one of the most versatile ensembles of the year in this story of a man and one wild mission to get a hair-cut. Whether they are popping in and out of his limousine or showing up elsewhere on Pattinson’s journey, the group comprised of Juliette Binoche, Sarah Gadon, Mathieu Amalric, Jay Baruchel, Kevin Durand, K’naan, Emily Hampshire and Samantha Morton each provide memorable insight to Pattinson’s dense lifestyle. Capping off with one of Paul Giamatti’s best turns in some time, this is one of the strongest ensembles of the year. – Jordan R.

Taking an a whole new variation of ensemble work, Cloud Atlass is a film so ambitious it’s hard to keep track of just who is who (the credits do help, but while based on our immersion in the film, you just kind of go with it). Across six time periods, the cast seamlessly shape shifts the past, present, future, and gender in this story about both freedom and density. Starring no less than Tom Hanks, Halle Berry, Jim Broadbent, Hugo Weaving, Jim Sturgess, Doona Bae, Ben Whitshaw, Keith David, James D’Arc, Susan Sarandon and Hugh Grant, they are kept in check by three filmmakers, who are also perfectly in sync for this massive undertaking. — John F.

Since Quentin Tarantino knows a thing or two about casting his movies, Django Unchained’s inclusion here is no great surprise. Nevertheless, his assembled team is a total blast, from the bigger stances of its leading men to the one-scene work of some surprise players. (Who the hell would have thought Don Johnson should play a suave plantation owner? After a view, Tarantino convinces us, who else?)  That they’re given such rich and satisfying dialogue to work with almost gives them an unfair advantage; as a viewer, I’m only there to take it in. Gladly did I do so. – Nick N.

The politics of crime involves a large senate of killers, crooks, and accountants, each with their own quirks, egos, and dreams. Bringing the small-scale crime story of Killing Them Softly to life in an engaging way requires that these low-level low-lives have outsized personalities to make up for the small time stakes. Brad Pitt and Richard Jenkins play off one another beautifully, and when Pitt takes his act to the road to see Scoot McNairy the film really elevates itself. Sam Shepard and James Gandolfini bring world weariness while Ray Liotta supplies what little pathos any character in this mix could have. Ben Mendelsohn, meanwhile, adds in greasy street-level grunge with just the right dash of humor to balance out an otherwise bleak portrait of modern crime. – Brian R.

Family, community, and organized crime are narrative themes that require a strong ensemble to pull off, and when mixing all three – as John Hillcoat does ably here – the necessity of having such a cast is amplified. In terms of the brothers Bondurant, Jason Clarke, Tom Hardy, and even Shia LaBeouf cohere into a believable and lived-in bond of anecdotes, inside jokes, and weary and knowing glances. Gary Oldman adds a dash of class as a gangster who respects the myth of the Bondurants, Mia Wasikowska lends a touch of grace as LaBeouf’s love interest, and Jessica Chastain delivers her own ethereal notes as a tough but classy newcomer to town. But Guy Pearce steals every scene he’s in with his bizarre affectations and undeniable menace. Watching these actors play off one another is a joy like none you’ll have seen in the cinema this year. – Brian R.

The title’s a little deceptive. Daniel Day-Lewis gives a titanic performance as America’s greatest President, but the power and importance of collective effort is one of the most crucial ideas to Steven Spielberg’s film — so, fittingly, we have a supporting cast to match the top hat. Particularly impressive is the way each member slips into their scenes’ tones — funny, sad, tense — like a glove. Whether you want some old-timey amusement from James Spader, marital strife on the part of Sally Field, or Tommy Lee Jones giving his most deliciously Tommy Lee Jones performance in more than a decade, Lincoln has it all. To think that the cast is only one part of its greatness. – Nick N.

Although Wes Anderson made many, many wise decisions when crafting Moonrise Kingdom, the orchestration of its wide cast — his best ensemble yet — still feels monumental. But let’s consider this a supporting ensemble. Moonrise Kingdom really hinges and pivots upon its two leads (who we already think fulfilled their obligations rather nicely), so it’s put upon the likes of Bruce Willis — in his best-ever performance? I’d say so — Edward Norton, Bill Murray, and Frances McDormand to provide grown-up contrast to this tale of wayward children. None of them are really given a prime spot over the other, and, in that, they each bring a distinct touch to what’s already a distinct film on the page. Throw in some quick turns by Harvey Keitel, Tilda Swinton, and Bob Balaban — stepping back, it’s really something else. – Nick N.

Coming from the man who gave us In Bruges, one knows Martin McDonagh has a knack for casting and with his latest effort, he only further exemplifies this skill. Bringing back Colin Farrell, he leads an oddball cast including Sam Rockwell, Christopher Walkin, Abbie Cornish, Woody Harrelson, Kevin Corrigan, Harry Dean Stanton, Gabourey Sidibe, and Tom Waits. One can tell they are all having a great time, and so are we. In this caper inside of a caper, there’s not a dull moment to be found — think of this one as the “fun” version of Killing Them Softly. – John F.

Although Jessica Chastain is the leading force in Kathryn Bigelow‘s take on the hunt for Osama bin Laden, her astounding ensemble is there every step of the way to help (or hurt) this mission. There’s Jason Clarke as the closest thing to her right-hand man, Joel Edgerton and a transformed Christ Pratt as the men at the finish line, Kyle Chandler as her inner opposition, Mark Strong in one brief, excellent scene, not to mention Jennifer Ehle and Carlos himself Edgar Ramirez. They’re all giving it their all for one of the year’s best film — it’s difficult to ask for more. – Jordan R.

What were your favorite ensembles of the year?