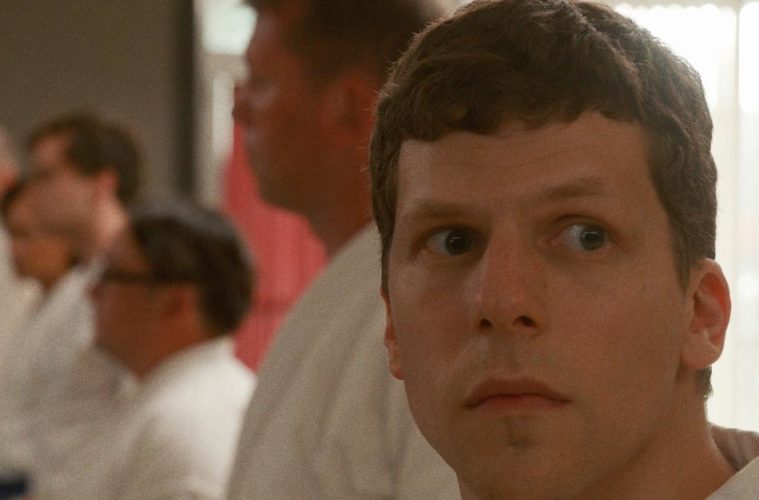 With SXSW kicking off this weekend, one of our most-anticipated films in the lineup is from Riley Stearns, who last gave us the intense, darkly humorous cult drama Faults. He’ll be premiering The Art of Self-Defense and ahead of the screening, Bleecker Street has debuted the first teaser.

Starring Jesse Eisenberg, Alessandro Nivola, and Imogen Poots, the film follows Eisenberg’s character as a bookkeeper who gets attacked so enters into a karate studio to learn how to fight back. The first teaser doesn’t spoil much of what’s to come, thankfully, and has Stearns’ particular brand of black humor.

After he’s attacked on the street at night by a roving motorcycle gang, timid bookkeeper Casey (Jesse Eisenberg) joins a neighborhood karate studio to learn how to protect himself. Under the watchful eye of a charismatic instructor, Sensei (Alessandro Nivola), and hardcore brown belt Anna (Imogen Poots), Casey gains a newfound sense of confidence for the first time in his life. But when he attends Sensei’s mysterious night classes, he discovers a sinister world of fraternity, brutality and hyper-masculinity, presenting a journey that places him squarely in the sights of his enigmatic new mentor. Audacious and offbeat, The Art of Self-Defense is an original dark comedy that takes toxic masculinity to absurd extremes.

The Art of Self-Defense premieres at SXSW on March 10.