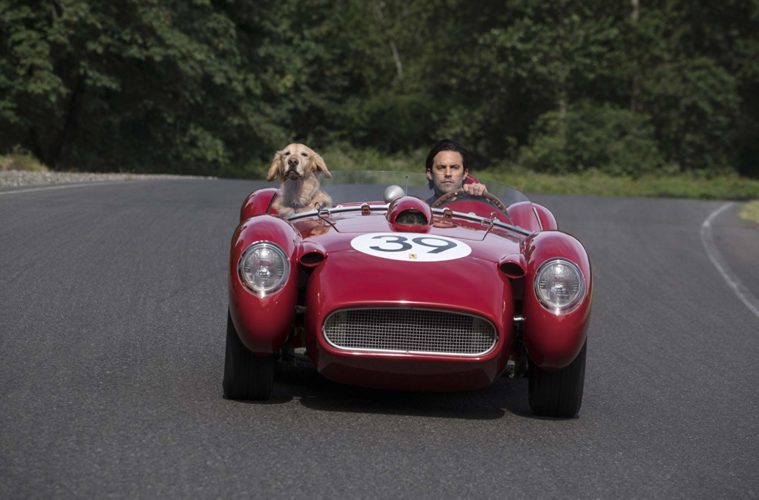 ‘The Art of Racing in the Rain’ Review: Kevin Costner Leads Viewers Down Touching, Goofy Track

In The Art of Racing in the Rain, directed by Simon Curtis, Kevin Costner voices the internal monologue of Enzo, a beautiful canine and the hero of this story. Adapted by screenwriter Mark Bomback from the novel by Garth Stein, here we have the jerkiest of tearjerkers. It’s a film so determined to wring out emotion from the audience that it offers up a cancer storyline and a beloved-animal-reflecting-on-those-he-loves storyline.

Denny Swift (Milo Ventimiglia) is a handsome racecar driver who spontaneously buys a puppy, feeling called to do so. Not too long after, he falls in love with schoolteacher Eve (a lovely Amanda Seyfried). As the milestone moments of their life come fast and furious, Enzo takes us along for the ride, voraciously voicing his opinion of every character and plot twist to which we are introduced. As Enzo mentions, he considers himself more human than dog in many ways.

The X-factor is Costner. A household name for over thirty years, his vocal presence alone does wonders. There is a comfort in the deep-toned, scratchy thoughts that personify Enzo, matched by some top-notch animal acting. Courtesy of cinematographer Ross Emery, a dog point-of-view frame adds another perspective to the overall cheery aesthetic. Smartly, we are given a glimpse, every once in a while, of our lead character’s vantage point. Ventimiglia and Seyfried mine enough chemistry to sell the heavier moments, though some of the dialogue from Bomback leaves a bit to be desired.

Films of this ilk are often critically maligned for their archetypal characters and predictable tropes. In many cases, it’s these exact same reasons these films are beloved by the public. And to be sure, there is plenty to nit-pick here. There are the hammy turns from Martin Donovan and Kathy Baker, who play Eve’s sneaky-evil parents; the sophomoric philosophical motivations as espoused by the family pet; the surprisingly (interestingly?) disturbing animated sequence in the second act.

And yet, it affected me. Reader, I will allow myself to jump into first person to tell you that. I was taken with the journey. Enraptured by Enzo’s accounting of how beautiful Denny and Eve’s daughter Zoe is as a baby; taken by the description of his learning to love Eve, whom he initially regards as an invader in his home; moved by the bond observed between dog and owner. Curtis is smart enough to chase his most melodramatic moments with a punchline, never appearing to take the whole thing too seriously. Conversely, Costner’s line-reads as Enzo are deadly earnest, a move that works well against human characters who regard him as just a dog.

We find ourselves in the midst of a dog movie resurgence. Pictures like A Dog’s Purpose, Megan Leavey, and Alpha have all found varying levels of success recently, not to mention a puppy generating the pathos for the entire John Wick franchise. In these pets do we often see pieces of our own lives, memories both bitter and sweet. That’s what The Art of Racing in the Rain is tapping into and when it works, it works like gangbusters.

The Art of Racing in the Rain opens on Friday, August 9.