SXSW Review: WeWork: Or the Making and Breaking of a $47 Billion Unicorn Explores the Dark Side of Disruptive Innovation 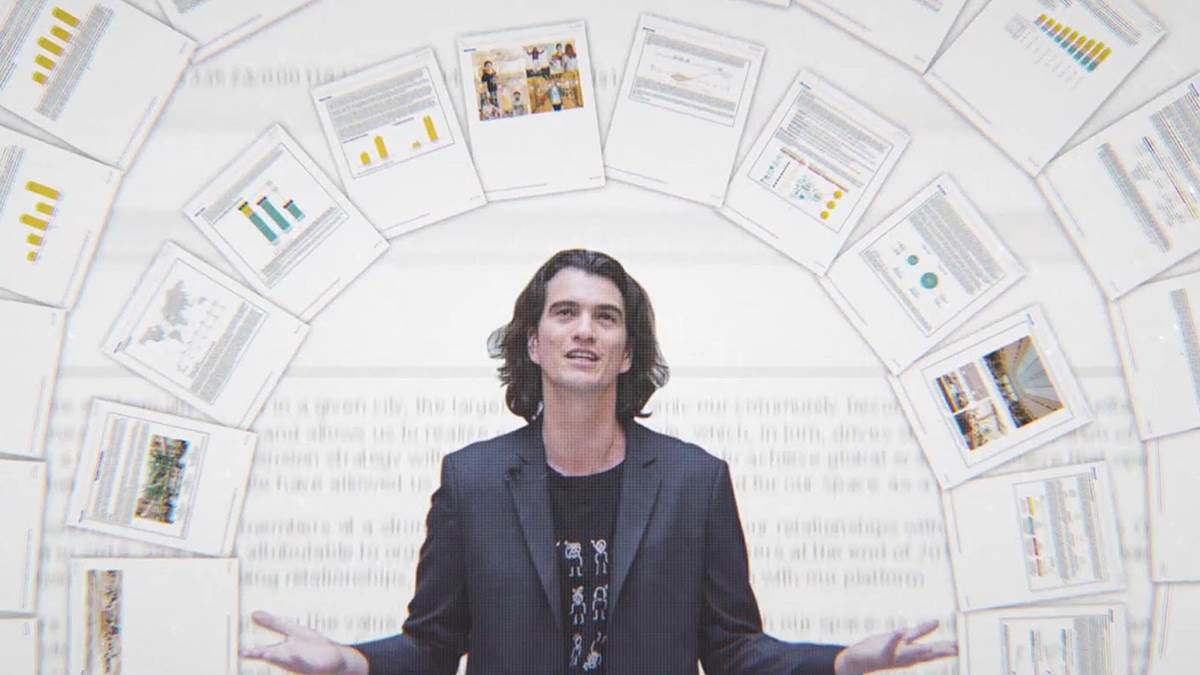 Many companies these days throw around terms like “innovation,” “digital transformation,” and “entrepreneurial culture” without actually doing anything unique, a core critique lobbied by NYU professor Scott Galloway when assessing the value of real-estate start-up WeWork, who was valued like a tech company rather than a real estate company. Jed Rothstein’s energetic business documentary WeWork: Or the Making and Breaking of a $47 Billion Unicorn explores the toxic side of the real estate company later known as The We Company and its flamboyant founder Adam Neumann.

Raised on an Israeli kibbutz, Neumann arrives in New York to live with his model sister and creates the co-working space WeWork with Miguel McKelvey, who also grew up on a commune, though in Oregon. They envision not just shared office space like those run by Regus––which looked more like doctors’ offices than the hip Instagram-friendly spaces they designed––but a “capitalist kibbutz” geared towards future masters of the universe as anyone who has worked in a WeWork will have noticed.

A well-researched and sweeping look at Neumann’s success and downfall, director Rothstein incorporate community members, designers, assistants, lawyers, reporters, and academics to cover the inside story of an ambitious organization that offered a college-like experience down to its idea to open what were essentially high-priced, all-inclusive dorms. Neumann, the man of the hour, is only seen in archival materials which are quite plentiful throughout the documentary, offering a riveting look at a different side of toxic tech-bro culture: the belief anything is possible and everyone is an innovative entrepreneur.

The concept does grow and becomes wildly popular, including amongst established brands, before imploding well before COVID-19 pushed us all to work from home. The film is more or less interested focused on the idealism of Neumann, who believes like a high-tech cult leader. Imagining the “We” community can rid all of the world’s problems, he builds a devoted following that’s not unlike Josh Harris’ project Quiet, the subject of We Live in Public, Ondi Timoner’s brilliant documentary. Neumann’s wife Rebekah inexplicably becomes an executive in the We company, injecting it with a large dose of spiritualism that makes long-time insiders uncomfortable both around the office and at its SXSW-like summer camp retreats.

While Harris’ Quiet was largely self-funded, Neumann convinced a wide array of investors, including SoftBank and the Saudi Sovereign Wealth Fund to go big, vaulting the company as a tech giant rather than a real estate company. The bubble pops when WeWork attempts an IPO and financial insiders are perplexed to find metrics like “Community Adjusted EBITDA,” simply made by Neumann. Red flags begin to appear and when one community member figures out their internal social media platform is grossly underused, his start-up is suspended for violating a vague “membership happiness clause.”

Recalling the dual documentaries about Fyre Festival, WeWork: Or the Making and Breaking of a $47 Billion Unicorn is yet another fascinating example of the overhyping of so-called wiz-kids who are able to achieve growth thanks to dumb money, but can’t manage through a downturn. When the going gets rough, Neumann goes on vacation.

Rothstein’s picture is an entertaining and well-researched work of financial journalism, embracing the mixed emotions felt by We insiders like filmmaker August Urbish (one of the first WeLive residents), corporate lawyer Don Lewis (who was asked by outsiders if WeWork was a cult), and community manager Lisa Skye (who uncovered early red flags while working 80 hours a week). Edited with a brisk pace by Samuel Nalband, WeWork is a fascinating character study of the kind of entrepreneur that is often embraced without criticism by the financial press as a “thought leader” while offering vague catch phrases about “disruption” and “transformation.”

WeWork: Or the Making and Breaking of a $47 Billion Unicorn premiered at SXSW and arrives on Hulu on April 2.