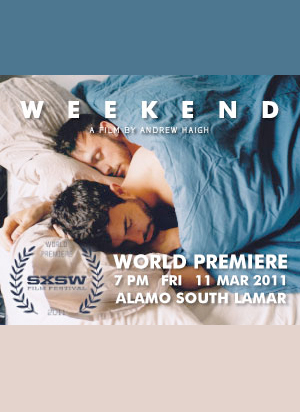 Weekend opens with a simple premise: Russell (Tom Cullen) is alone. His life is static. The opening moments establish the lyrical qualities of the film. He partakes in a lonely ritual, washing himself in a bathtub before heading out for a night that will change his life. Like many young characters in film, he is waiting for his life to start.

After a party with his straight friends, he wanders over to a gay club where he picks up Glen (Chris New). They have what should be a one-night stand until Glen takes out a tape recorder to interview Russell the morning after. What follows isn’t an act of psychological terrorism or even a romantic comedy, but a contemporary love story coded in the performance of homosexuality. Performance is key. Much of the film is spent in flats discussing contemporary gay issues, which have evolved to a different type of angst. The “closet” is truly no longer an issue, except perhaps in their professional lives, but in their personal lives they are grappling with a condition documented in another SXSW film, Hit So Hard. The feeling you’re the only one.

What Weekend does with these long passages is unremarkable and where it loses its way. It builds with exceptionally vivid rhythms of life, to a love story that ultimately holds little interest. Glen and Russell simply spend too much time getting to know each other in long angst-ridden passages that dominate much of the film’s second act. The moments are uninspired, falling short of maverick queer British filmmakers such as Terence Davies, who also make political, striking and powerful films about coming to terms with sexuality. Where Weekend succeeds is in writer/director/editor Andrew Haigh’s use of both space and rhythm, learning editing from several Hollywood masters as an assistant. The atmosphere of a late summer weekend and the excitement in the wake of fall is universal and the stage is set for what could have evolved into a passionate and intense love story. If only Haigh would let the sexual politics get out of the way the film could have flourished. A particular moment that truly doesn’t work is Russell’s surprise when he tells Glen to meet him in a straight bar.

I’m sure there is a level of self-awareness these characters have, but their everyday lives are uninteresting for the same reasons Joe Swanberg’s films fail. Showing, instead of telling is interesting, particularly when the telling is either a universal condition or something that has been done before. Had the roles been reversed and the film were remade, obviously without the careful restraint of Haigh, with a heterosexual couple (say Swanberg and Greta Gerwig), this would be a painful and uninteresting, but lyrical experience.