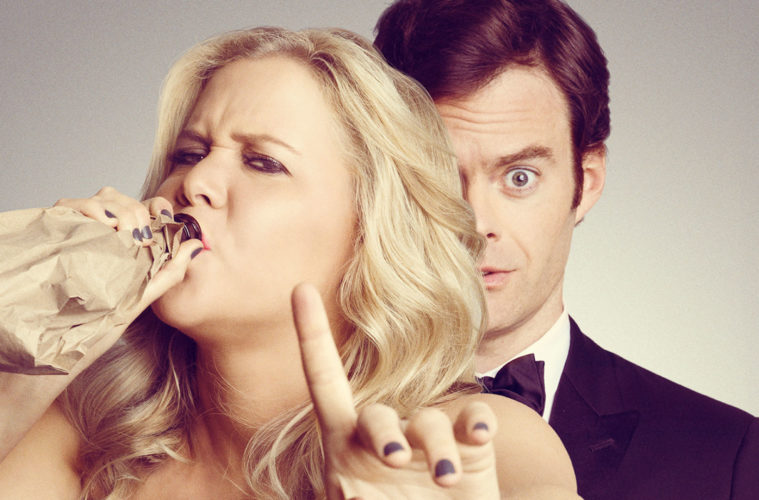 To be upfront, the version of Trainwreck I saw at SXSW was, like Neighbors and Bridesmaids in previous years, a work-in-progress. It hasn’t been locked and small tweaks — or possibly big ones — could be coming, but if it’s similar to Universal’s aforementioned premieres, the film is likely near-finished. As it stands, Judd Apatow’s latest is a hilarious and seemingly perfectly timed picture that announces Amy Schumer as a force to be reckoned with in the comedy world for years to come. It seems only natural that this vehicle, which she headlines and wrote, would springboard her, but it is also the cast around her and Schumer’s willingness to be anything but politically correct that’s part of the charm and hilarity of Trainwreck. Clearly I wasn’t alone in missing several follow-up jokes throughout the film as laughter echoed through the Paramount Theater. It’s the kind of film that should only gain more traction on repeat viewings and, perhaps unlike other work from Apatow, the pacing is excellent.

Most comedies struggle to stretch out to as much as 90 minutes, and yet Apatow’s career is littered with films over two hours in length. Here, though, events breeze by, showing signs of a return to triumph for the director. Raunchy is fun, but having a new leading lady in comedy get to explore and push against societal norms is even better. In Trainwreck, we get a woman who’s unapologetic about enjoying sex and not wanting commitment. She strives to avoid it throughout the film, and is brazenly outspoken about any topic — no matter how offensive. When she isn’t high or drunk, her filter is revived, but she’s also unwilling to compromise at times. Exploring careers and what it takes to gain upward momentum in a company, Amy is a journalist for a trashy magazine with a sexist slant — in both directions, it seems — and is challenged to write and do things she doesn’t want. Her boss, Dianna (the ever-malleable Tilda Swinton), is grooming Amy to become an executive editor and encourages her to branch out, so she gives her the assignment of covering sports medicine doctor Aaron Conners, played by Bill Hader, who specializes in surgery on big-name athletes. Amy loathes sports, and even announces as much during the pitch meeting, yet is given the assignment for that very reason.

There are shades of Apatow’s last hit, Knocked Up, in that it isn’t so much hilarious as it is a genuinely good story of our current society. However, Apatow and Schumer manage to bring the laughs along with raw honesty. As expected in an Apatow film, there are many surprises among the ensemble. John Cena, who has been making strides to become the next Dwayne Johnson in transitioning from wrestling to film star, is absolutely wonderful. He gets more naked than Schumer throughout and plays a hyper-masculine man with a heart of gold, while also a bit juvenile in his outlook on life and unable to think on the fly. He is dating Amy while she incessantly cheats on the side. Much ribbing is had at his expense, and he proves he can handle this level of earnest comedy. Then there is NBA superstar LeBron James, playing himself, and appearances from a slew of other athletes. His first scene or two feels a bit stiff, but near the end you look forward to every time he is on screen; he shines when placed alongside Hader and Schumer.

Proving themselves to be a dynamic team, Schumer and Apatow can take people generally not perceived to be in the comedy world and give them the ability to shine. More impressively, all of it is pulled off without the feeling that they are just names to sell the film with. As Amy researches into Conners’ story, she starts to fall for him, but the fall is, at times, unexpectedly quick. Trainwreck’s middle contains a montage of them that feels oddly out-of-place with Schumer’s narration. Another misstep is a poorly executed, hurried sequence that transitions between a long, drawn-out argument they have at night. One hopes that these are the rough spots Apatow and Schumer are working out — though, even with them noted, there’s little else to complain about.

Amy and her sister, Kim (Brie Larson), are taking care of their ailing father, who attempted to drill into them that monogamy is a lie and unnatural in a hilarious opening scene, and this, again, brings more unexpected heart into the film. The way they deal with him and his bridge-burning personality are incredibly human. Yes, this is a comedy, and it occasionally paints with broad strokes, but it’s written and directed by two highly intelligent people that have an insight into our society that clearly informs the narrative. The duo, with wonderful, star-turning performances and a raw honesty to their credit, should rightfully find themselves with a hit come this summer.

Trainwreck screened at SXSW and opens on July 17.