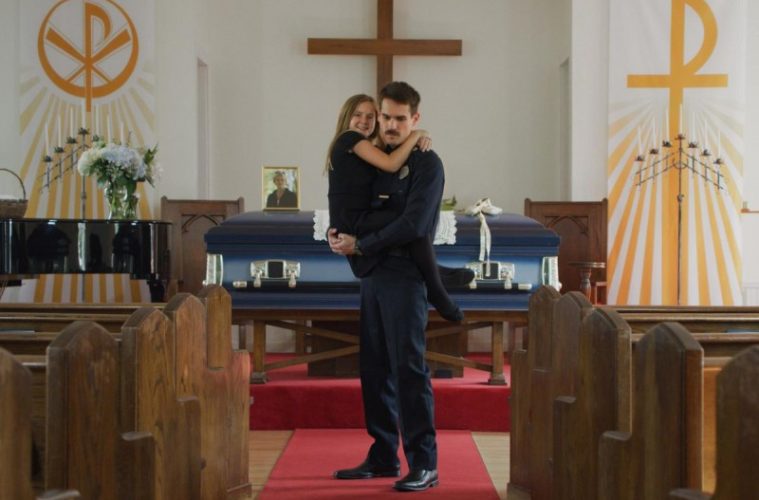 Uncompromisingly challenging at times, Jim Cummings’ feature-length adaptation of his award-winning 2016 short film Thunder Road offers a unique portrait of a tightly wound lawman on the verge of a nervous breakdown. Cummings stars as Patrolman Jim Arnaud, a mild-mannered professional who’s broken after the passing of his mother. Beginning with a jarring, unbroken long take, Arnaud offers a eulogy by way of an awkward dance for his mother inspired by Bruce Springsteen’s “Thunder Road” and recorded by a co-worker Nate (Nican Robinson). Despite the direct reference, that scene is largely where the worship of New Jersey’s poet laureate stops.

Rather, Thunder Road is largely a one-man performance, written, directed, and performed by Cummings. And the subsequent film has the trappings (and limitations) of a stage play, including long takes where officer Arnaud monologues in scenes that feel reminiscent of Jim Carrey’s performance in Me, Myself, & Irene. In one instance, he’s calm and professional, and in others he lashes out, talking over himself in the presence of the chief after wrestling a drunk and disorderly guy to the ground. But he also shows glimpses of compassion as in a scene where he lets off a troubled teen sitting in a car full of “slickers” (his words) in a mall parking lot.

In the middle of a separation from his wife, Rosalind (Jocelyn DeBoer), he’s holding out hope for joint custody of his daughter, Crystal (Kendal Farr), until the footage from the funeral comes back to haunt him. Abruptly switching tones from the serious to the absurd, Cummings seems to be channeling both the verbal and physical humor of Will Ferrell in certain key passages, and yet the result is an often unexpectedly moving portrait of a fractured man. The pressures of his job don’t help his mental state as he’s pushed further over the edge by witnessing a death at work that could have very easily been prevented. And while cops develop a morbid sense of humor as a safeguard for dealing with terrible situations, that only goes so far when combined with his tragic home life.

Thunder Road is even more successful with scenes that last (by design) long enough to embarrass both the subject and the viewer, especially as the pathos leads to humor. The film is wholly original, taking on issues of the day from parental rights to mental illness and later, the opioid crisis. But while there is plenty of depth here, Thunder Road feels a little too much like it has been cobbled together from sketches and ideas for a one-man show. For Cummings, it appears that is a feature and not a bug.

Thunder Road premiered at SXSW and opens on October 19