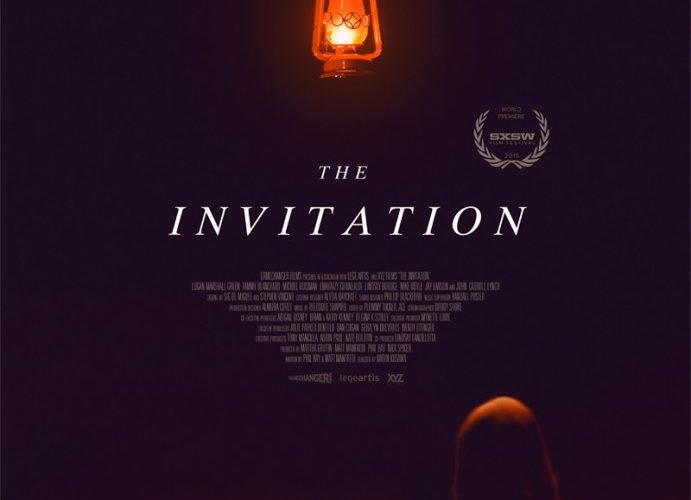 When you play in the midnight slot of a film festival nowadays, audiences can expect something to go horribly wrong within the world of the movie. So going into The Invitation, without even knowing what it is about, there’s the impending sense things aren’t going to turn out well. Yet even in that environment, it becomes painfully clear that director Karyn Kusama’s latest feature is going to make audiences outside of that context aware of the stakes. As the tension effectively builds and pay-off is pulled off with aplomb, The Invitation is a mostly effective small-scale thriller, despite some missteps along the way.

Happy couple Will (Logan Marshall-Green) and Kira (Emayatzy Corinealdi) have been invited to Will’s ex-wife Eden’s (Tammy Blanchard) home to visit old friends and reconnect after an extended absence. We learn later that a tragic past drove a wedge between Will and Eden, creating an aura of tension that remains unresolved. So even before they arrive at the posh Los Angeles hills home for the dinner, there is an ominous haze over the night. Once inside, we learn that they are in for a treat. As you watch the friends make small-talk we see Eden’s boyfriend David (Michiel Huisman) begin to take a more involved role as host.

Kusama clearly paints tension between Will and David that continually builds. Every move David makes to assuage Will is met with more mistrust. You think they might just come to blows and get it over with but Kusama always finds a way to settle down the tension before things boil over. But the main source of Will’s angst isn’t towards the party or David. Instead it falls on Eden, who is radiant in a white gown and smiles from ear to ear. She seems jovial and free, which contradicts everything Will feels she should be going through. It’s not so much that he doesn’t want her to be happy, but instead is mystified and a bit terrified that she is the polar opposite of what she was when Eden and David disappeared two years earlier.

Flashbacks of the tragic lives Will and Eden led are told as Will decides to let the party continue without him in the main room while he wanders his old home. It’s a gorgeous setup and has been slightly remodeled, complete with burglar bars on windows. Cinematographer Bobby Shore lights the home with a soft, golden glow that will turn to different color hues in flashback to signify where we are and when. Just when things seem to finally settle down, two new guests of Eden and David’s are introduced, including a rambunctious young woman named Sadie (Lindsay Burdge) that is a bit too free for most of the guests’ liking and the imposing but soft-spoken Pruitt (John Caroll Lynch) who can’t help but come off as sinister even when he smiles.

The wine and booze are flowing and as the night winds on we continue to get a sense that while Eden is outwardly happy, she is broken on the inside still. She snaps at one of her friends, slapping him across the face, then tells him that her new outset on life is to not hold things in. He doesn’t know whether to laugh or get angry, and he settles for somewhere in between, remarking on how loud the slap was. Indeed, much of the sonic environment in The Invitation is loud and piercing. When Will has flashbacks or out of body experiences there is a screeching, jaw-clenching noise that ignites a cringe. At times it felt the mix was a bit overboard on the high pitched noise, but it is curious to suspect that this was downright intentional to put you in the same headspace as Will.

Some of the secondary characters are stereotypes on the outside but show different levels of concern for Will and the party altogether. Whether it is David constantly locking the front door–there was a burglary not too long ago in the neighborhood, he claims–or the way the newcomers keep looking over the group with increasing eagerness, one starts to really get on Will’s side with his suspicions and wonder why no one is following his lead. Even when someone leaves in the middle of the night, there’s a tug of war that plays out as the guests encourage her or ask her to stay.

Kusama seems positively in control of the atmosphere and Marshall-Green plays his part perfectly as a damaged and suspicious man. He looks a bit bedraggled for the LA setting, with long hair and grizzly beard. One gets the sense that had Will and Kira been able to simply skip the party they would never have any issues from here out, but this house turns them on each other and we, as the audience, begin to suspect that it’s more than just the hosts acting creepy and weird. But much of this feeling is sold a bit too well, too often.

Relentlessly, Will discovers secrets that are brushed aside. By the time David shows the group an creepy initiation video for a cult that he and Eden joined, where they also met Sadie and Pruitt, one just wants the characters to come to their senses and leave. One finally does and you have hope that others will follow suit but this just wouldn’t be a thriller if people did the logical move.

The mood rarely falters in The Invitation and while many of the moments happen in a predictable manner, the finale is a fireworks display of sonic moments. It’s like the world that Kusama so carefully built is lit on fire and it’s a satisfying conclusion to something she’s been building for the entire film. As it stands, The Invitation is a predictable bad-turns-worse single-night thriller with confident direction from Kusama that explodes with a powerful finale.

The Invitation premiered at SXSW and opens on April 8th.