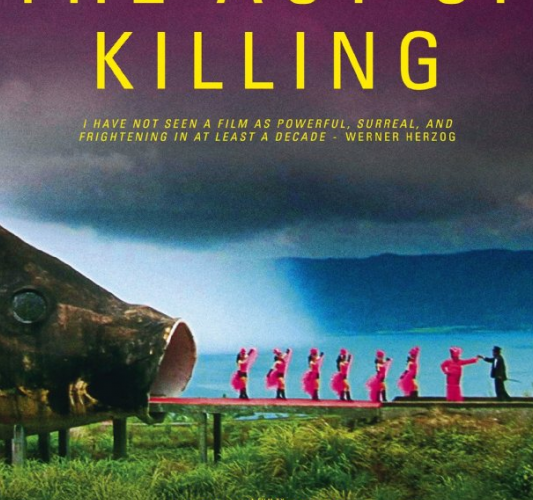 [SXSW Review] The Act of Killing

One of the most dark and emotionally deafening documentaries I’ve ever witnessed, there’s no easy way to comprehend The Act of Killing’s total impact and how affecting it truly is. This is darkness and pure evil explored, a look behind the proverbial curtain. What one may find there is even more troubling, because you may start to feel for the “monsters.” You laugh with them. You begin to understand that in the fake celluloid world of black and white characters in films and the revisionist history, people aren’t so cut and dry. So you become troubled and angered with your own humanity. These people shouldn’t make you care, but I dare you to not have conflicting views when you finish watching.

During the mid ‘60s in Indonesia, the government wanted to stop the spread of “communism” and everything creative that would challenge the regime that had come into power. So they used paramilitary and gangsters to eviscerate millions of people without ceremony. There’s no question that it was a blood bath. Citizens were accused if they were Chinese; had an education; or just challenged those in power. Indonesia was not a place for an intellectual. And now? Now the gangsters live open and free. The very neighborhoods they terrorized as young killers are where they reside. They enjoy the respect and power that they retain. They gather continual bribes, to this day. And they have pride in what they did. They talk about it openly. So director Joshua Oppenheimer asked them to recreate the scenes of their terror in the hopes of documenting a true piece of history from a different perspective, and they happily obliged. They even play themselves. Often fatter and grayed, they fondly recall the terrible acts they committed. As we laugh with them, it’s easy to later cringe in disgust. But this is intentional comedy inserted by Oppenheimer to keep you from truly sinking too far in despair. By now, there’s no recourse for the acts they’ve committed, so they are free.

For so long, it seems like none of these men are even truly aware of how horrible the acts they committed are. There’s no nervousness. They’re confident in their stories. The main character, Anwar Congo, shows how they were heavily inspired by the American cinema gangster films. In fact, in one truly disturbing moment, they explain how piano wire is a great tool for killing by strangulation and they refer to the films as the inspiration. They see themselves as those glorified stars from the films. This makes some of their eventual change even more unsettling. You grow to know these people as humans. That’s, indisputably, true. They are not monsters and many have families. When a few come to realize the horribleness of it all, you start to become conflicted. This world is so much easier when things are black and white and you know who to hate and who to love, but The Act of Killing powerfully changes that entire notion.