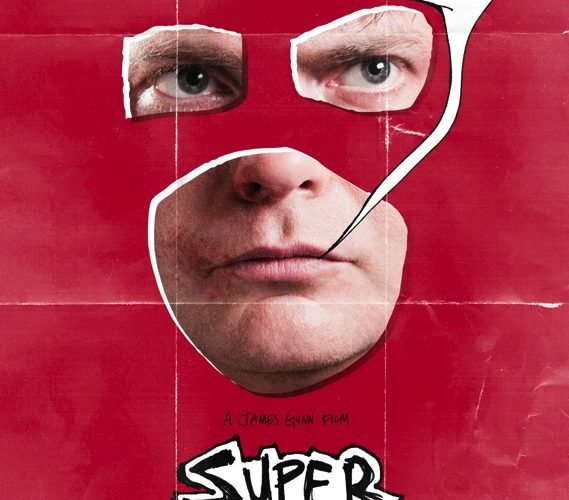 With the rise of superhero movies over the past decade, a sub-genre has evolved: the D.I.Y. (Do it yourself) superhero. Movies like Kick-Ass and Defendor feature normal, everyday people choosing to fight crime, just like the comic book heroes that they admire. Super, the second directorial effort from James Gunn (Slither), has elements of both of these movies plus something more. Violent as hell, Super is a pitch-black comedy that will probably only appeal to a certain section of the movie-going public. Those who love it will swear up and down about its excellence. Those who don’t will probably walk out.

Rainn Wilson stars as Frank D’Arbo, a cook at a dumpy diner who constantly trumpets the two greatest moments of his life. One, his marriage to recovering drug addict Sarah (Liv Tyler), is understandable. The other – the time he helped a police offer catch a criminal – is just sort of sad. Things are going relatively well it would seem, and then a bomb drops. Sarah ups and leaves Frank for a drug kingpin named Jacques (Kevin Bacon), falling off the wagon in the process. Frank is broken-hearted and lost, unsure of what to do. Until, of course, a vision comes to him that tells him he needs to become a superhero and fight crime. Calling himself “The Crimson Bolt”, he takes to the streets armed only with a catchphrase (“Shut Up, Crime!”) and a wrench ready to crack the skulls of anyone doing a misdeed, be it drug-dealing or cutting in line. His superhero antics catch the eye of comic book store worker and hyper-psychotic young woman named Libby (Ellen Page), who dons her own costume as his sidekick “Boltie.” Thus does the fighting of crime commence.

This is a dark movie. A dark, dark movie rooted in pain and misery, but with a shell of humor around it to make sure you laugh rather than try and slit your wrists. Frank/Crimson Bolt is such a sad character and his obliviousness to the fact that Sarah doesn’t even really love him is heartbreaking, not to mention the fact he’s completely insane and has visions where he’s covered with tentacles while his skull rips open. His idea of fighting crime are so brutal they feel painfully realistic. He smashes bad guys’ skulls with his wrench. That’s it. He doesn’t interrogate them, he just whacks the hell out of them. Thankfully though, Super manages to make a joke out of this.

While we’re on the subject of Wilson, this is definitely his signature film role. He is so good and so believable it’s hard to remember the guy from The Office. The actions of the Crimson Bolt would have felt completely different if it was played by someone with inferior comic sensibilities. I’m not the biggest fan of Ellen Page either, but she gives an equally-brilliant performance. She gets what she has to do and has the talent to also make her character funny in the face of some dark actions.

Super had me for most of the movie, but there were bits and pieces here that took me out. This is technically supposed to be based in realism, but the fact that no one ever sees the license plate of the car Crimson Bolt drives away in drove me absolutely nuts. I  mean you just watched this man who cracked a guy’s skull like an egg run into a car and drive off; he’s not covering his license plate or anything, write that stuff down! Also there’s the fact that there are no ramifications for his actions; he keeps his secret identity so that’s kind of the reason, but it’s also clear that people have been able to discern who he was under that mask (namely the villains and Libby), so it’s not out of the realm of possibility someone else could have seen him and done the same thing. But no, he just attacks and eventually murders, but there’s no jail time. I know it seems like a dumb nitpick, but if I’m going to believe that this guy is practicing vigilante justice in a real-world setting, I would assume people would react realistically as well.

As annoying as that was, it doesn’t take away from the film as a whole. It makes it its own due to its warped sense of humor and realistic but at the same time cartoony brutality. Wilson and Page are absolutely perfect and understand the material to know how they have to play their characters, and everyone else is pretty damn good well. Again, Super won’t be for everyone, but for those who appreciate the style Gunn practices, it’s worth every second.