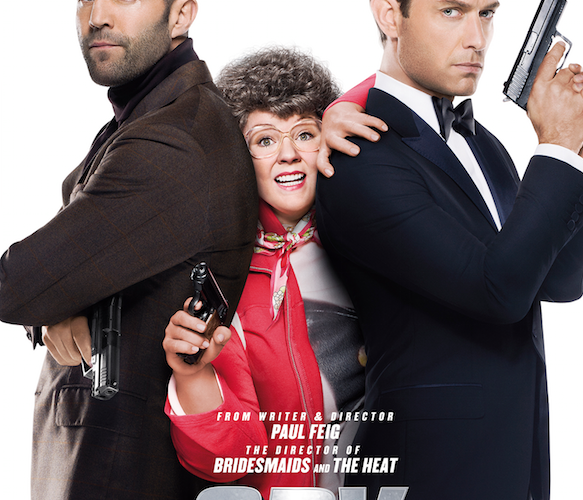 You never knew you wanted an R-rated comedic take on the action spy genre until halfway through Spy and you’re caught wondering why it has never been done quite this well before. Despite some rough patches peppered throughout, Paul Feig‘s latest film manages to continue rolling without much care for its missteps. Years after her break-out in Bridesmaids (also from Feig) and many films later, you’re going to either despise Melissa McCarthy’s wild antics or you’ll roll with the punches. McCarthy plays CIA agent and analyst Susan Cooper who spends her time at a desk with a mic in the ear of the Bond-like covert operative Bradley Fine (Jude Law), helping guide him with numerous technologies like thermal vision and layouts of buildings. “There are three men rapidly approaching the door up ahead,” and various other tips and commands are given by her, but things go wildly astray when Fine is murdered and the various agents in the field are exposed.

Cooper was nursing a crush on Fine and when he is killed she is determined to get back at the evil woman that took him down. So, she volunteers much to the chagrin of another operative Rick Ford (Jason Statham) and manages to get out in the field. The tweak here is that these films often employ untalented newcomers in the role of spy, asking them to do extraordinary things. But here, we learn that Susan Cooper was actually hand-picked to be a desk operative because she was so well-qualified the other male agents were threatened. Small touches of reality create a potent snowball effect that elevates the film beyond just a simple comedy. Early and often, Feig emphasizes that this is an adult-aimed film by the various gory deaths of people and the way the characters interact. Of particular charm is Statham’s Ford, who continues to follow Cooper during her time in the field and taunts her incessantly that she is going to fail. Ford is an egotistical wiseass that loves to drone on about the incredible things he has accomplished, much of which sound outright delusional. Susan and him bicker like children and it is one of the recurring gags that works exceedingly well.

The operation from the outset is to track down an arms dealer named Reyna Boyanov (Rose Byrne) with access to a nuclear bomb. In the film, Byrne employs a thick European accent and has a ridiculous hairdo supported by showing off her cleavage and dressing in lavish outfits. Never has Byrne made me think of Eva Green more than in this film and she is easily able to sell her character’s bratty nature. As Cooper gets closer to tracking down Reyna, the action picks up again. McCarthy’s physicality is on full display yet again; she is willing to fall, move, groove, and sweat buckets all in service of getting a laugh and she deploys this skill continually throughout Spy.

To watch her keep up with bad guys on foot is a bit silly. Sure, yes, it is a comedy and specifically a riff on the James Bond films — complete with an impressive opening title sequence set to a ballad — but it feels like a bit of a shortcut. Yet, the film builds a sort of momentum that I can’t recall seeing. This shouldn’t be nearly as funny nor on-point about the way that society treats middle-aged women, yet it hits those marks continually. Much of the plot becomes nonsense by the end of the film and yet one can’t help but laugh as familiar faces are thrown in again and again. Another successfully comedy from Feig, Spy is equally funny as it is full of charm and genuinely solid action beats.

Spy premiered at SXSW and will open on June 5th.