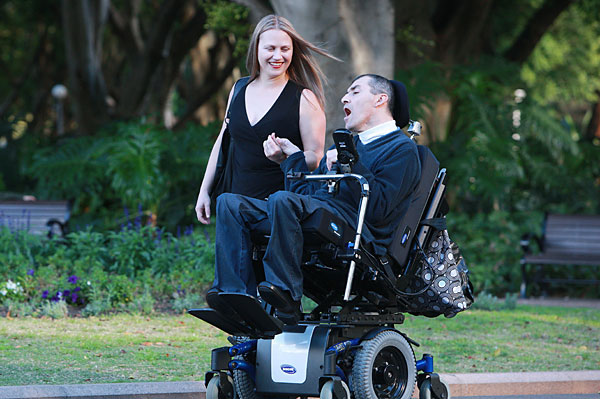 Scarlett Road makes a compelling and compassionate argument in its portrait of Rachel Wotton, a mid-30s sex worker in New South Whales Australia, where her industry has been decriminalized. Rachel, also working on a masters thesis in human sexuality, has been a sex worker since age 20 –in strip clubs, brothels and now in private practice. Similarly portrayed in the Sundance hit The Surrogate, she has turned her attention to disabled clients via a non-for-profit called Touching Base.  Seeing a sex worker, or in the case of Wotton, a sex surrogate (she describes her services as message, body slides and a tug) is considered a human right.

Much of  Catherine Scott‘s film is dedicated to the development of techniques of working with people that are disabled as Touching Base brings together activists, support workers and sex workers. Peoples with Disabilities, Inc – a non-for-profit support channel also directs clients seeking sexual services to a group of vetted and trained workers, Rachel leading the charge. We learn New South Whales is rare in its decriminalization of sex workers, as Rachel travels around the world presenting her masters thesis. Absent is filmmaker Catherine Scott‘s voice in this portrait, which is perhaps light on journalism. It is more academic and difficult to argue, listening to sex workers provide compassionate theory to paraplegics, allowing them to explore without embarrassment. Amongst the most striking images in the film are those of photographer Belinda Mason; her Intimate Encounters series (which features Rachel) explores sexuality and disability with elegance.

Rachel’s personal life is explored as well, particularly her relationship with Matt – whom lives in a different state and has a two-year-old son. While they go on vacation together to California, they are unable to move-in together as Matt cannot move to NSW and Rachel cannot move out of NSW and still practice sex work. However her dream is to be able to offer services to more disabled clients while still maintaining her hourly rate, while never quoted we imagine is not cheap nor covered by insurance. For this she writes to Richard Branson with the hopes of establishing a Not-For-Profit brothel.

Scott’s compassionate representation of women as caregiver verses victim of circumstance challenges many assumptions about an industry that in the US has been demonized. Perhaps driving it underground causes this demonization (along with the family values politicians). This makes a strong case for a safe, legal industry accessible to those that require assistance, providing human dignity. Hearing the voices of three profiled disabled men, including one whose fantasy is to have a women spend the night in his bed (Rachel does, for a price, and the encounter is facilitated by the man’s parents). Scarlett Road succeeds in portraying the other end of the exotic aesthetics, practice and superstition clouding the Michael Glawogger’s visceral Whore Glory, which is also making the festival rounds.