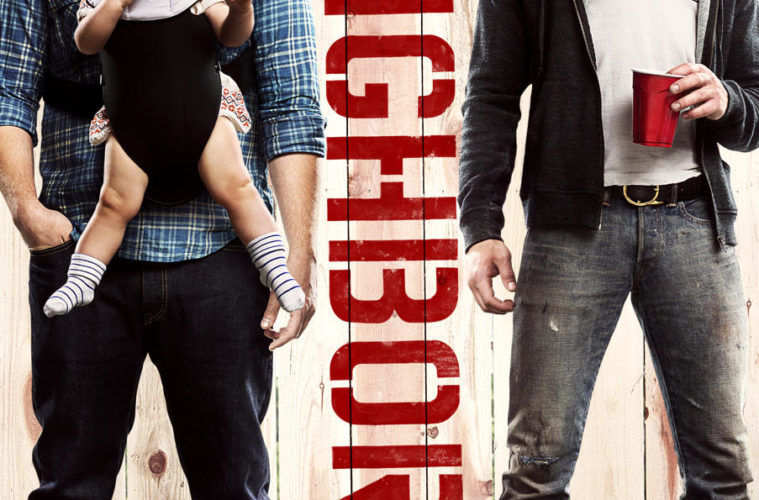 Feeling refreshed and shocked are durable signs that a comedy has delivered, but most of all, one wants laughs. As subjective as that factor may be, director Nicholas Stoller manages to deliver on all of these aspects in his latest film, Neighbors. As noted ahead of its SXSW premiere, this is a work-in-progress print, as the film will improve with minor color corrections, sound mix fixes, and perhaps some improved CGI. As it stands, however, the story starts in an ordinary fashion but sets itself up early to move into much raunchier territory with humorous hijinks. While there are plenty of laughs throughout, it’s Rose Byrne that shines the brightest — she’s both the unexpected standout and simply a joy to watch amongst the madness.

Kelly (Byrne) and Mac Radner (Seth Rogen) are new parents and have just moved into their dream home and neighborhood. But things quickly turn when the new neighbors, a fraternity, move in and start to do what one might expect of the group; namely, lots of big parties and playing loud music at odd hours of the night. The fraternity is led by Teddy (Zac Efron), the president, and Pete (Dave Franco), the vice president, who immediately understand that the couple next door might present a problem. So they decide to try and get on their good side early. Of course, Kelly and Mac are trying to do the same thing to hopefully make the new neighbors welcome, but also to make sure that they understand they want the noise to be kept down.

Sure enough, the parties get a little too loud for them and when a promise isn’t kept to Teddy, he decides to wage war on the Radners. It’s here when the film truly becomes more than a standard studio comedy. The full fraternity lore and zaniness is on display, but the way that Stoller (who last directed The Five-Year Engagement and is rightfully best known for Forgetting Sarah Marshall) pits the two households against each other is the elevating factor. They are childish pranks for the most part, and usually harmless, but the hilarity is found in how petty and ridiculous they are. Instead of just admitting fault or that they are wrong, the ante is continually upped as the two simply try to push each other’s buttons. While the fraternity takes the upper hand initially, the Radners give as good as they get.

With the unforgettable (for better or worse) The Paperboy and last year’s reserved At Any Price, Efron has been slowly breaking out of his safe, teenage image and this film certainly pushes its R-rating limits. His comedic timing and cockiness are a perfect fit for the leader of the hooligans next door. He plays up the physical aspect many know him for by often appearing shirtless while frequently acting like an idiot that has continually has had things handed to him. The dynamic between Teddy and Pete is one of the most interesting aspects, as they are both leaders in the same fraternity, yet completely different in their aspirations and school life. Pete is the smart, focused one while Teddy is much too preoccupied with getting back at the Radners or throwing epic parties. Once the feud starts, things quickly escalate and this is where the comedy hits its stride and rarely relents. Like much of the packed Paramount Theater audience, dialogue and potential follow-up jokes were missed because we were busy laughing at the initial gag — perhaps the strongest praise a comedy could get it.

While Stoller is clearly keyed into delivering setpiece after setpiece of frenzied comedy, he does let other areas falter. The parents rarely have to attend to their child while all of these shenanigans go on; yes, the child does play a key part and the film manages to work in quite a few “couple with the newborn” laughs, but for the most part, the film revolves around just how bad things get between two neighbors. In Stoller’s world, a simply apology won’t do nor will a simple prank. It has to be two levels beyond and that’s exactly why you should show up for Neighbors.

Neighbors premiered at SXSW 2014 and opens on May 9th.