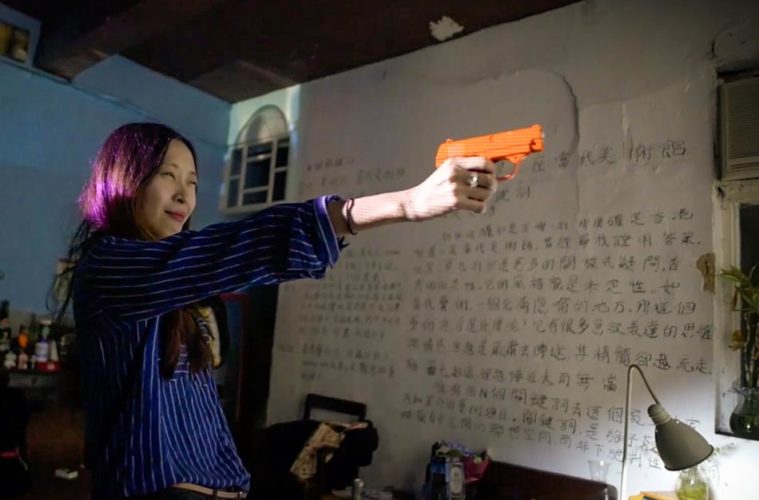 SXSW Review: ‘Leave The Bus Through The Broken Window’ Proves It’s a Lonely Planet After All

An evocative personal journey and study of globalization and loneliness, Andrew Hevia’s Leave the Bus Through the Broken Window often veers into silliness as the director arrives at Art Basel Hong Kong to make a film about Hugo, an international artist from Miami. He’s not successful in his approach and growing frustrated from talk of art in seven languages, he decides to instead get drunk and take a nap.

Arriving weeks ahead of schedule, Hevia aimlessly stumbles to find his footing between the past, present, and an imagined future. He seems to go off course at multiple turns, connecting and disconnecting with migrant workers socializing on their day off and backpackers around the city.

Despite its setting and what I assume might be the initial goal of the project, Hevia films artists and dealers but this isn’t a documentary about the economics of the art market like The Price of Everything. Rather, he’s exploring the transactional costs of being human. One artist that Hevia photographs intensely claims to be an introvert but is able to turn on the charm at every turn.

Struggling to get a hold of the culture and finding himself lost in countless urban malls, the Moonlight co-producer documents his personal frustration. We learn a bit of his backstory chronicling various girlfriends and locations, pondering what brought him to Hong Kong on a mission that seems futile. Perhaps he’s just running away, although he doesn’t seem to be enjoying the adventure. Then again, anyone can relate: on a trip we often remember the good parts, the pretty girl we had a conversation with at a bar, the art show we saw, and not the lines, the waiting, and the restlessness of wondering if this is where you’re meant to be.

Structured as a video diary and confessional, Hevia uses the voice of a computer-generated avatar to express his loneliness, despair, and frustrations with the process. What we see on screen is limited explicitly to the behind-the-scenes of making a documentary, really any documentary, as he finds himself lost in a sea of performance.

Taking up residence in a micro-apartment that’s smaller than the size of a prison cell (but it’s in a hip neighborhood, we learn, as they have a craft brewery and cross fit) doesn’t help the loneliness and anxiety. Although not a happy affair, Leave the Bus Through the Broken Window feels raw and emotionally accurate, exploring Hevia’s own liminal state as he obsessively captures his trip, having trouble doing what he set off to do. For that reason, the film is downright maddening in passages as his computer-generated avatar spells out what is obvious in the imagery: Hevia seeks an escape from his life in the United States and instead finds himself trapped in one big glamorous high-rise mall.

Leave The Bus Through The Broken Window premiered at SXSW.