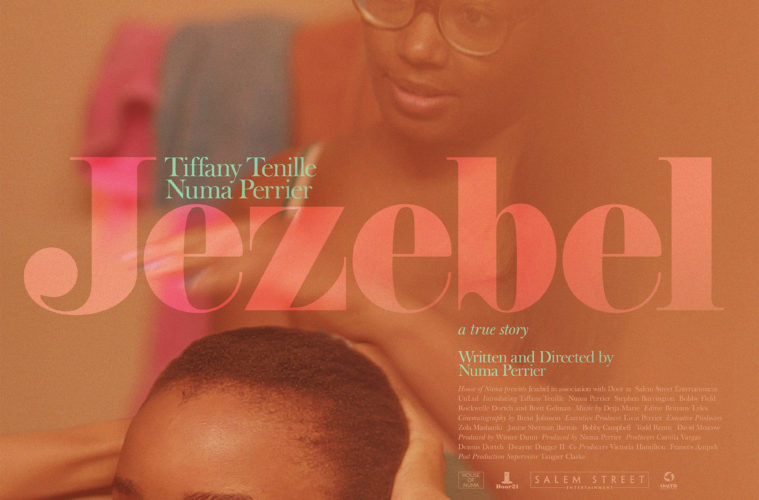 Set in the pre-broadband era of Las Vegas, 1998, Numa Perrier’s Jezebel is a sensitive rather than exploitative look at legal, entry-level sex work that’s realistic without being explicit. A family unit sleep five to a suite in a roadside motel, led by de facto matriarch Sabrina (played by writer-director Perrier). The men in the home–including boyfriend David (Bobby Field), a former phone sex client of hers–barely work, heading down to the strip for cheap beers after pre-gaming at home. Sabrina is the matriarch because she brings in revenue working as a phone sex operator from home, although her pay is not quite enough as the family deals with their ill, off-screen mother. Their mother was largely cared for by Tiffany (Tiffany Tenille), and once their mother has passed, our protagonist is sent off to the job market.

Adapting the persona Jezebel, 19-year-old Tiffany is instructed to see Chuck (Dennis Janfee), a young proprietor of an early webcam business. Unprepared, Tiffany arrives wearing basic white undies, which quickly does spark the interest in a client interested in popping her cherry. Tiffany is shown the ropes by Vicky (Zoe Tyson), Chuck’s sister and the firm’s number one employee. Taking advantage of primitive broadband and buffer speeds, she’s taught several tricks of the trade to avoid actual penetration which we’re told could equal a prostitution charge.

With an extensive background in episodic content, Perrier creates what could be an origin story for a downward spiral although this kind of work is treated as what one does to get by–after all, sister Sabrina offers extensive tips for managing clients, including what to wear, what toys to purchase, and the need to get her own PO box for gifts. In her first starring role, Tenille brings a tremendous gravity to Tiffany and Jezebel’s sexual awakening, something we sense she previously did not give much thought to as she fantasies about both her newly-found powers of persuasion as well as her co-workers.

Jezebel humanizes legal and gray area sex work with subtle stakes. It never feels as if Tiffany is in much danger thanks to the guidance of Sabrina, although she’s fully aware of how she’s being exploited by Chuck and Vicky. She’s become a star for the company but this is still a service industry; top customers will always receive special treatment even when they step out of bounds. The feature film debut of Numa Perrier, Jezebel is a confidently-directed work of American neorealism, examining the social conditions that cause Jezebel, a soft-spoken yet headstrong go-getter in any industry to slowly compromise, without ever feeling like an exploitive work of “poverty porn.”