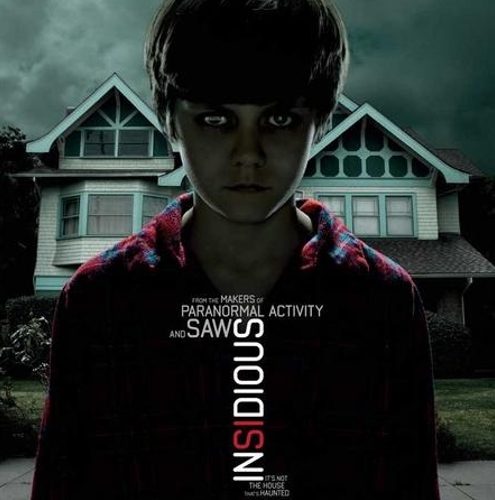 Insidious, the newest horror movie from Saw creators James Wan and Leigh Whannell, chucks away the blood and gore that most in the genre rely on nowadays. It instead tries to scare you the old-fashioned way, by being suspenseful and creepy. And oh man, is it creepy.

Patrick Wilson and Rose Byrne star as Josh and Renai, a married couple who have moved into a new home with their three young children. They seem to be living the American Dream of a picket fence and a suburban house, but there are strains. Renai is a struggling musician trying to compose songs, but also has to deal with being a housewife having to be responsible for their children. Josh, a teacher, is all smiles in the morning, but disappears for work and doesn’t return until he absolutely has to in order to avoid his family life. They aren’t a happy couple is what I’m trying to get at.

Things take a turn for their worse when one of their sons named Dalton (Ty Simpkins) falls off a ladder in their attic and into a “coma,” but no physician has seen anything like it. It’s like he has just checked out. And that’s when things get crazy. The weird instances that have been going in the house, like objects being moved around and weird voices being heard on a baby monitor, become more intense and she begins seeing people…or what seem like people. And from there, that’s when things get a little crazy.

Insidious is a slow burn kind of movie. One won’t get scared right away; instead, the movie focuses on the family and gets the audience to care about them and their situation, while adding hints of something more sinister happening. As a movie watcher who grew up with the Saw series and other horror films where they try to scare you right at the outset, this was a little jarring, but I appreciated what they were trying to do. They wanted to creep you out, not just murder people and hope for jump scares coming from all sides. I admired the style as I was able to get invested in the family and their situation. When the suspenseful moments started to happen, I found myself looking away or blocking my ears waiting for something crazy to go down. Few movies can unnerve me like that, but this one I was constantly on my toes. Part of the credit for this also needs to go to Joseph Bishara, who was responsible for the music. It’s an excellent score th4at gives the aura of an old-school horror movie, beginning with the slow swell as the suspense builds before exploding (and being insanely LOUD) when the scare happens. It was perfect. Insidious does have its share of issues, but they are difficult to talk about without spoiling the second half of the movie, and I’d rather not do that since it’s worth going in not knowing a thing. I will say when everything is finally revealed, it’s going to be a dividing point; either people will jump on board and go along with it, or it’s going to take them right out. For me, it took me out more than anything, despite the competent scares that were still littered throughout.

Although it falters, there’s definitely no question in my mind that Insidious is worth a watch. Simply put, there are no mainstream horror movies that are anything like this. It’s satisfying there is still some attempt to make a legitimately scary horror film instead of relying on the easy tricks. It’s creepy and slow burning, but it’ll drag you right along even if there is a point where you may question Wan and Whannell’s choices. A low-budget horror movie effective without using the crutch of blood and guts, Insidious should be supported.