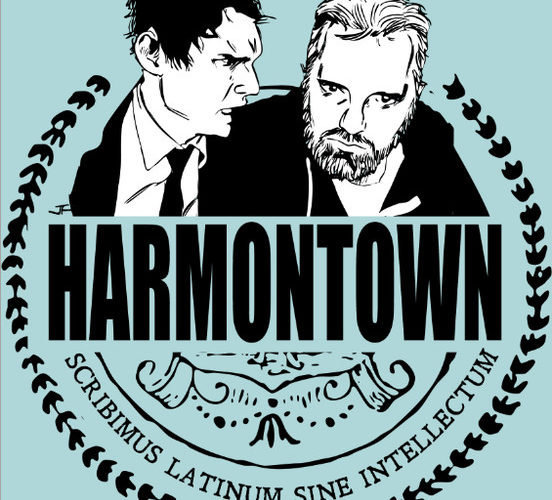 We all know our own flaws, but change can be so devastatingly difficult to accomplish that it can haunt some people. Whether it is alcoholism or other kinds of abuse, or even the mundane like picking your nose or biting your fingernails, we all struggle to turn that leaf. Dan Harmon, creator — and some say, genius — behind Community and numerous other programs (a handful of which never even made it on air) is the focus of a new documentary called Harmontown.

That name may garner a reaction from fans of the talent, as it’s also the moniker for Harmon’s live show podcast, one he created shortly before he was eventually fired from Community after its third season. Producer/director Neil Berkeley follows Harmon and three others, his girlfriend and merchandise seller Erin McGathy, dungeon master Spencer Crittenden, and co-host Jeff B. Davis as they take the podcast on the road. What follows is about as enlightening of a documentary on a neurotic, controlling, wickedly intelligent mind as one could hope. To begin, I’m an avid fan of Community; it’s unlike anything else on TV. While the ratings weren’t great, the critical praise was through the roof. Sadly, as Donald Glover points out during Harmontown, ultimately it is a business. If you don’t have the ratings to justify the cost, you’re likely on the chopping block. And that’s exactly where Community was and still is to this day. I’ve been intrigued by the various feuding headlines that surround Harmon. Whether it’s firing shots at NBC after letting him go as showrunner from his own show or spats with Chevy Chase, there always seemed to be something of a firework aspect to Harmon: he was always ready to go off. So, a documentary focused solely on him where his loose-cannon aspect was both celebrated and skewered was definitely enticing.

Yet it turns out that Harmontown is so much more than just a study on what makes Harmon tick. Furthermore, it turns into an exploration of the kinds of people that surround Harmon, past and present, and their own reflection on him. And there also ends up being quite a lot of focus on his three traveling companions, Spencer, Jeff, and Erin. Thankfully, Harmon is as brash and outspoken as you might be led to believe. The podcast uses nearly no discernible structure or script and so it really becomes quite the beast when taken on tour, melding and forming to whatever the audience is at the time. In this way, we see Harmon at his best. His goal, stated numerous times, is to simply connect with people. So often the people that are drawn to Harmon’s work are outcasts, just as he has been/was/is, so he appreciates that they show up in force. A lot are introverts, and sometimes Berkeley makes a very human yet troubling observation, showing the various fans that turn up in filmed headshots that tend to show how much they look like the stereotypical nerd. But more than anything, this is a showcase of what a blessing and a curse a creative mind can be. Harmon is a ticking timebomb that isn’t made any less volatile under the influence of alcohol. In fact, he rarely appears in the film without a drink in his hand of some sort. It’s devastating to see such a creative mind be sidetracked by impairment, but it might also be his lubrication to stay creative. He seems to be an extrovert but he is also a force of nature so who knows how much effort it takes to control himself, drunk or sober. At a certain point, Harmon, ever the observationalist, notices and says what so many others around him feel: that he is loose cannon and he wants to change. Erin, for all it seems, is a steadying rock in his life. But he can explode when he doesn’t get his way or is told what to do, and we see both the sorrow he feels and the frankness in how much he isn’t able to change. Despite this darker side, the journey is worth it just for the laughs alone. Harmon and his companions are often raucously funny; his podcast wouldn’t be as popular as it is without that being true.

Harmontown not only provides a behind-the-scenes look at Harmon’s career to date, but it also gives a look at someone trying to do something genuine. More than anything, though, the documentary explores a side of Harmon that you might expect but nonetheless feel privileged to see. He becomes revealing and openly talks about his flaws. Berkeley shows Harmon’s struggles to funnel his creativity into a career and still have coworkers and collaborators that don’t want to split off from his as fast as they can. Indeed, Harmon is a complicated human and that’s enough of a draw to recommend the film even to people unfamiliar with his work.