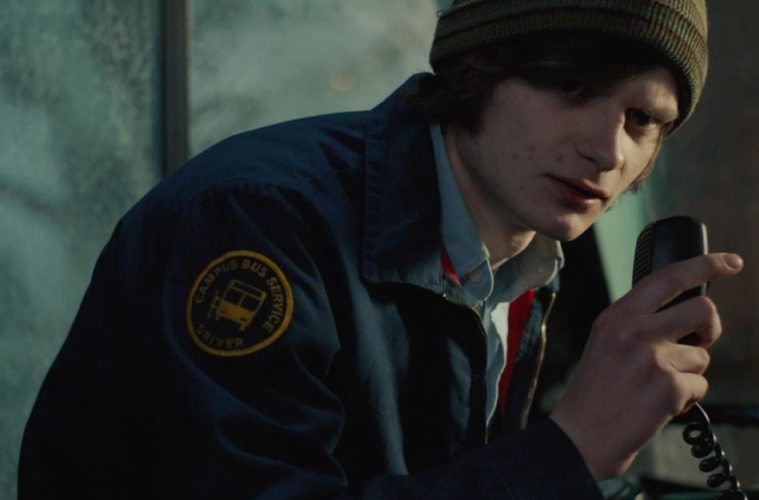 Set in a time before Uber, smartphones, and mass social networking, Brandon LaGanke and John Carlucci’s Drunk Bus is a nostalgic look at college life in small-town Kent, Ohio. Set largely on a bus that makes the rounds between the Greek houses, dorms, and bars, Drunk Bus is far from an original film but it’s the kind of cinematic comfort food that you might invite a few friends over to watch in your cramped dorm room. If you ever had that kind of college experience, especially in dead of winter with some friends and some snacks, this movie will probably make you nostalgic for those kinds of nights.

Charlie Tahan stars as Michael, a recent graduate of Kent Institute of Technology who finds himself on campus driving the drunk bus for far longer than he imagined. His girlfriend Amy (Sarah Mezzanotte) has left him in that kind of liminal state of being unsure what to call their relationship now that they are trying to make things work form afar. Yet he still carries a torch for her despite the fact there is a pretty obvious choice on the drunk bus each night. The film thankfully resists the urge to go in that direction, instead preferring to commit to Michael’s slacker nature.

It’s not that he isn’t without talent or ambition, nor is he content with older roommate Josh (Zach Cherry), a former campus bus driver who never grew out of the college party scene and now has to register as a sex offender for a public urination incident. Rather Michael has always let Amy guide the relationship, leading to a certain amount of sexual frustration that is later resolved in a way that makes for a great if not embarrassing story. The evening is the stuff of memoirs should Michael ever choose to leave Kent.

Michael is without a close friend despite being friendly with museum studies major Kat (Kara Hayward) and her GBF Justin (Tonatiuh) as they set out on their adventures around town. That is until he meets Pineapple (Pineapple Tangoroa), a 300-pound Samoan bouncer hired after an incident on the bus. With tattoos on his face, Pineapple is a menacing presence who decides to give Michael a kind of Superbad-esque night on the town by turning the drunk bus into a party bus and spending time with a Ted (Dave Hill) his Devo-loving drug-dealing pal. Wackiness ensues as running the drunk bus exposes Michael to the good and bad of humanity, including a retired art teacher on a motorized scooter who is always out for a late-night stroll.

While Drunk Bus contains the tropes of several young adult films, from college movies to pictures about slackers that are stuck in dead-end jobs and hopeless relationships (Kevin Smith’s Clerks is undoubtedly an influence on Chris Molinaro’s script), the film captures a gritty realistic side of college. Michael finds himself at the service of college students with the privilege to go off on “self-discovery’ trips to far-flung places. He doesn’t have the ability to take those chances as a photojournalism major with a broken camera who fears he’ll settle in the footsteps of his obnoxious boss. Here is the rare kind of often sweet college comedy with good-natured laughs that captures a side of the process rarely seen in frat comedies: the divide between those in the service industry and those that have the luxury to party eight days a week.

Drunk Bus was set to premiere at SXSW.