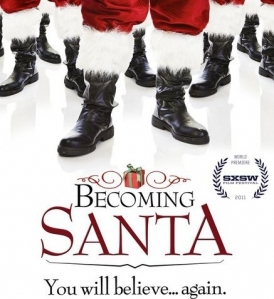 Becoming Santa, a documentary by Jeff Myers is something I would have passed over if it was playing in a theater nearby or on television. And it’s a shame, because this documentary tells one of the sweetest, most engaging stories I’ve seen in quite some time.

The main subject of Becoming Santa is a California man named Jack Sanderson. Sanderson has lost his Christmas spirit after the death of his parents and is looking for a way to get it back. So he decides, for the holiday season, he will become a professional Santa Claus. Now, this isn’t a simple process where he can don a fake beard and just “ho ho ho” until his voice goes hoarse; the process is a lot more involved, including dying his beard and hair completely white and going to Santa School in order to learn how to be a better Jolly St. Nick. Through his journey, we follow his path to regaining his Christmas spirit while experiencing the surprising amount of work that goes into becoming Santa Claus.

As far as documentary subjects go, Sanderson tops the list. His engaging personality draws you in and commands your attention. He also happens to be outright hilarious and quick-witted. There’s a section where he plays Santa for the lighting of the Christmas tree in Chelsea, Massachusetts, and the little jokes he makes flying over the audience’s heads had me cracking up. He owns the job that he has dedicated himself to and keeps Becoming Santa afloat.

And then there’s the American Events Santa School, taking place over two and a half days in Denver, Colorado. The teacher is Susen Mesco, and she may possibly be the craziest, most energetic person on this planet. Mesco takes them through all aspects of the job, from the entrance, to dealing with restless children, to the proper way to pose for photographs, even going so far as to pretend to be a child herself in order to keep the Santas-in-training on their toes. What really struck me is the whole section about what to do when a child asks for something that they cannot do, like bring their mother back to life. It makes one realize that a professional Santa also acts like somewhat of a therapist, having to empathize and ease the child’s mind in the face of some terrible things. Children see Santa as someone they can confide in, and because of this, they’ll hear things that they would never expect. How to react to that is crucial and as a Psychology major, I was intrigued at how they are trained to deal with these situations. I may have learned something about my craft.

Becoming Santa also goes into the history of Santa Claus, from his beginnings (he was a real person called St. Nicholas) to how he is perceived in other countries with different names and personality traits. One of the most shocking revelations comes withe  segment on the Netherlands, whose Santa has a helper named “Black Peter.”. He happens to be played by someone in blackface. Yes, to this day. Even though Santa is meant to be a positive Christmas icon, there are some darker sides as well. The doc also interviews other professional Santas, and one gets the idea that this isn’t a job to them and Santa isn’t just a character; he’s a very real person. It’s not as creepy as I made it sound, trust me. But the next time you think that the Santa at your mall is just some schlub who is doing it for the paycheck, you may be wrong; this may mean more to him than you think.

If there’s anything to knock in Becoming Santa, it’s the brief attempt to convey the idea that Santa is a universal holiday icon. Let’s face facts: he’s associated with Christmas and very little else. And because Santa Claus is more of a Christmas tradition, the audience narrows a bit. People who didn’t grow up with Santa in their life will probably not be compelled to watch a documentary about it.

That’s just a small qualm though and on the whole, Becoming Santa put a smile on my face for the entire time, especially with Sanderson’s off the cuff remarks. I know that after seeing this, I’ll be tipping my hat to every professional Santa I see from now on. It’s a job we take for granted, but it is more important than any of us realize.