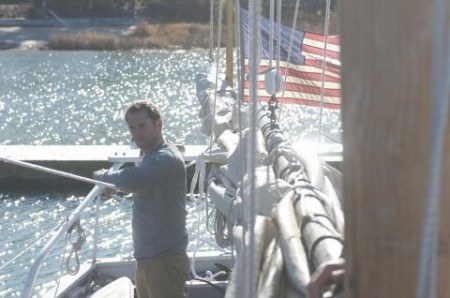 [SXSW Review] A Year in Mooring For ambiguous reasons a man doesn’t take to the sea, but exiles himself besides the sea. Josh Lucas plays an unnamed man, credited as “Young Mariner” in A Year in Mooring (or should we say mourning) – the latest from Chris Eyre (Smoke Signals). Sparse is the dialogue and exposition as the Young Mariner we gather is young father of certain means. He’s dressed well, he’s able to purchase a boat that is a lousy investment and he holds no job at the opening of the film. We know very little and the film restrains itself from that big expected moment of exposition where all of the details are told to us. The exposition comes in the form of brief flashbacks of an uncertain time and incident, and perhaps is a bit too understated for the rhythms it builds.

Our lead is on a island and slowly this community creeps in, again with great restraint. He drinks himself to sleep every night, fixing the ship. Although in exile there are places he can’t avoid, like the supermarket. He forms a connection with a Lauren (Casey LaBow) – a checkout clerk. While they may have something there, she is a key person in this time and place. She isn’t going to pull him from this funk, but she assists in breaking down a wall.

He forms a relationship with a waitress (Ayelet Zurer) and her father, an Ancient Mariner (James Cromwell), letting new people in that pose an emotional risk to his process. Cromwell is effective as a wise Ancient Mariner showing the Young Mariner who to repair a sail and the film isn’t shy about its use of metaphor. The sparse dialogue and slow pace, coupled with cinema-scope photography that has both a claustrophobic and dizzying effect. The moods and moments are right, but emotionally something is missing, perhaps due to the restraint in the initial exposition. At just 88 minutes the running time still feels a bit long when we are thrown on a boat with too little context, but I suppose this is part of the scheme of the film – it’s an emotional and personal journey of transformation and grieving that remains at a human level.

Much of the film has an internal rhythm with the sensibilities of a novel. It doesn’t quite achieve poetry but does reach a quiet peaceful inner-beauty through the nights of hard drinking and work on the ship. It isn’t the work that sets this character free so much as the time he uses to mourn naturally. Eyre has crafted an effective but imperfect emotional journey.