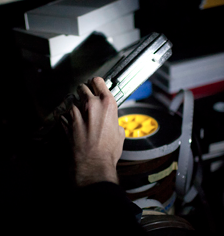 The found-footage subgenre is still thriving at the box office, but with little inventiveness. Attempting to resuscitate this aesthetic, six independent filmmakers united to create a horror anthology film from an idea hatched by Bloody Disgusting’s Brad Miska. You’re Next‘s Adam Wingard, The Innkeeper‘s Ti West, Joe Swanberg, Glenn McQuaid, Radio Silence and David Bruckner make up the team, for a horror film that features one through-line story and five, separate shorts.

The simple concept follows a reckless group of troublemakers who film themselves wreaking havoc and performing sexual exploits, in return receiving a small payment for selling these VHS tapes online. They get a promise of more money with a mission to literally find footage at a broken down house. And so begins the series of stories.

Kicking things off on a high note, The Signal co-director David Brucker helms Amateur Night, which sees a group of frat boys, one equipped with a camera embedded in his glasses, head to a bar for an evening out that goes terribly wrong. Reminiscent of Cloverfield‘s first act, this piece nails these character stereotypes, as the dread builds when they bring back an odd-looking girl (Hannah Fierman) to their hotel room. What follows is packed with tension and more surprises than any of the rest of the films.

Then we get a one-two punch of the most disappointing shorts, first with Ti West‘s overlong look at a newly married couple  (Joe Swanberg, Kate Lyn Sheil) on vacation. Second Honeymoon follows a stranger that intrudes on their otherwise romantic time, but when it is finally over, the reveal is unsatisfying. Then we have I Sell the Dead director Glenn McQuaid‘s Tuesday the 17th, following a group of college kids who head into the words. The surprises and situations are fairly stock, with the only interesting element being the villain, who only exists on camera, rendered by static glitches caused by camera.

One of the creepiest shorts is Joe Swanberg‘s The Sick Thing That Happened to Emily When She Was Younger, which takes place completely inside an iChat window (asking the question of how did this get transferred to VHS?). Emily (Helen Rogers) is disturbed by a itching in her arm and talks to her long-distance boyfriend James (Daniel Kaufmann) for comfort, who plans to come visit her soon. Whereas the twist in West’s short felt cheap, this one is expanded and makes for a sickening, frightening good time.

Last up is 10/31/98, from the group Radio Silence. Set on Halloween, this one packs the most special effects and is a fun way to go out. The characters are hardly memorable, but the real star is the haunted house they head into. Is it just a party or something more sinister? If you made it this far into the film, you should know the definitive answer.

V/H/S marks a rejuvenation in the found footage area, and while I wish the center story was tied together better with the shorts, it is lively, well-constructed horror experiment. Check out our thoughts below in video form, featuring myself with The Film Stage’s Daniel Mecca and Raffi Asdourian, as well as ShockYa‘s Rudie Obias.