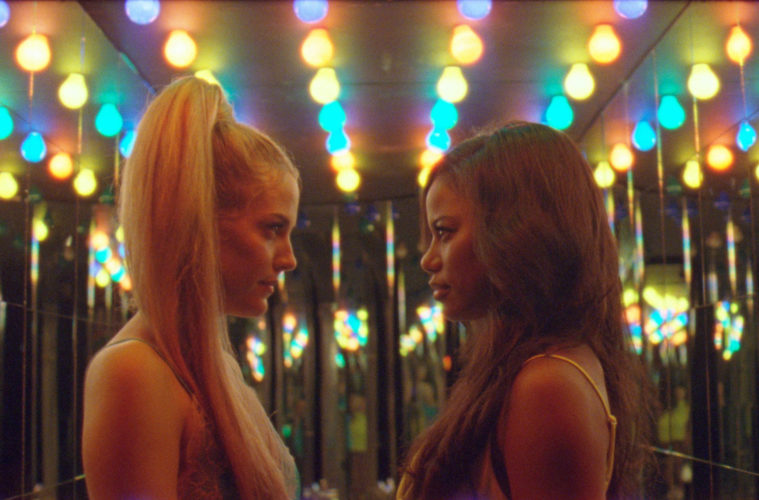 Twitter is Shakespeare for the 21st century and, as Zola proves, Janicza Bravo is the director best adept at bringing all the peculiarity, hilarity, and ugliness of social media mayhem to the big screen. If you were on Twitter in October 2015, you likely saw A’ziah “Zola” King’s massive thread recounting the bizarre journey she took from Detroit to Tampa accompanied by Jessica, a new acquaintance that wanted to utilize their pole dancing skills to make serious money in Florida strip clubs. What follows was a treacherous two-day adventure of turning tricks, one-upping pimps, witnessing a murder, attempted suicide, and no shortage of strange characters. Based on Zola’s 150 or so tweets and David Kushner’s Rolling Stone article (which revealed some of the story was embellished for the sake of entertaining storytelling), Bravo and co-writer Jeremy O. Harris (Slave Play) have now delivered a surprisingly faithful adaptation while bringing endless invention and energy to the proceedings.

Led by fantastic Taylour Paige in what will certainly be a breakout role, the story kicks off directly with the first tweet of the thread as the first of many fourth wall breaks occur: “Y’all wanna hear a story about why me and this bitch her fell out? It’s kind of long, but full of suspense.” Bravo’s film is, in fact, not too long at 90 minutes, and the suspense is one of a more unexpected variety. Continuing the off-kilter vision on display in her directorial debut Lemon with now a more clearly-defined narrative, she is the perfect fit for this material. Accompanied by Mica Levi’s score–which mixes fairytale-esque harps to introduce the story and Southern-fried beats and synths as the craziness progresses–Bravo elevates the material and provides a unified, eccentric vision.

It’s quite early on that one realizes they are in good hands: the first use of freeze-frame, featuring Riley Keough’s Stefani (aka Jessica), pauses on her face in the polar opposite of a photo-worthy position, as her mouth is open and her eyes a rolled back. It may be slick in style, but Bravo not here to deliver the same conventional beats another director may have done with this same material. Take another sequence as the gang, which also includes Stefani’s evil pimp X (Colman Domingo) as well as her aloof, loyal boyfriend Derrek (Nicholas Braun), arrive at their Tampa motel. They get out of the car and in a wide shot, the sound is isolated to two kids bouncing a basketball on the second floor of the motel. It’s one of many subtly brilliant touches to make this world uniquely her own.

Taken at face value, Zola is a raucous, fun jaunt that captures the frenzied new dialect of our social media age. With fierce spirit, Keough and Paige deliver the pitter-patter of texting and exaggerated accents to a symphonic degree of cartoonish euphoria. Look a bit deeper, and Bravo is able to weave in underlying desperation and darkness as we see the transactional nature of sex (skillfully, disgustingly rendered in hotel room montage) and the slavery-esque mentality of prostitution as X venomously explodes when Zola attempts to leave or when Stefani wants her cut of the money she earned. These are unsettling and uncomfortable moments and by injecting humor into them, Bravo performs tonal miracles again and again. “The space I feel most comfortable in is stressful comedy,” Bravo said after the premiere and that she’s able to work in laughs to these undeniably harrowing situations is a phenomenal feat. Shades of Spring Breakers, Hustlers, The Bling Ring, The Florida Project, and Magic Mike XXL abound as lurid recklessness melds with the highs and lows of pleasure-seeking and the economics of selling one’s body for a living.

Shot on 16mm with cinematographer Ari Wegner (The Girlfriend Experience, In Fabric), she’s able to capture the various hotel rooms as if we’re inside them, with scenes often playing out in wide master shots from a corner. In an early sequence in the car, where Braun and the crew are belting out Migos’ “Hannah Montana,” we go to a cellphone selfie perspective to capture the intimate pleasure and rowdiness unfolding–an initial wave of joy soon to be broken. The scene recalls another recent A24 release, Waves, but instead of the posturing and emotional detachment in Trey Edward Shults’ 360-degree camera technique, the approach here is one that feels wholly natural to the POV of the characters.

The ride must come to an end, but unlike the perhaps more satisfying coda at the end of the Twitter thread, this story is far from tied up. While it may peter out, the fact that our character is in the proper headspace to reflect and narrate the insanity on display–as in real life–hints that they got out mostly unscarred. Tackling self-empowerment (as Zola educates Stefani, rethinking their economic viability, “Pussy is worth thousands!”) and Rashomon-like differing perspectives as we’re trapped in our own social media bubbles, Janicza Bravo is here to usher in a new cinematic vision of how the internet has changed the way we present ourselves.

Zola premiered at Sundance Film Festival and will be released by A24.