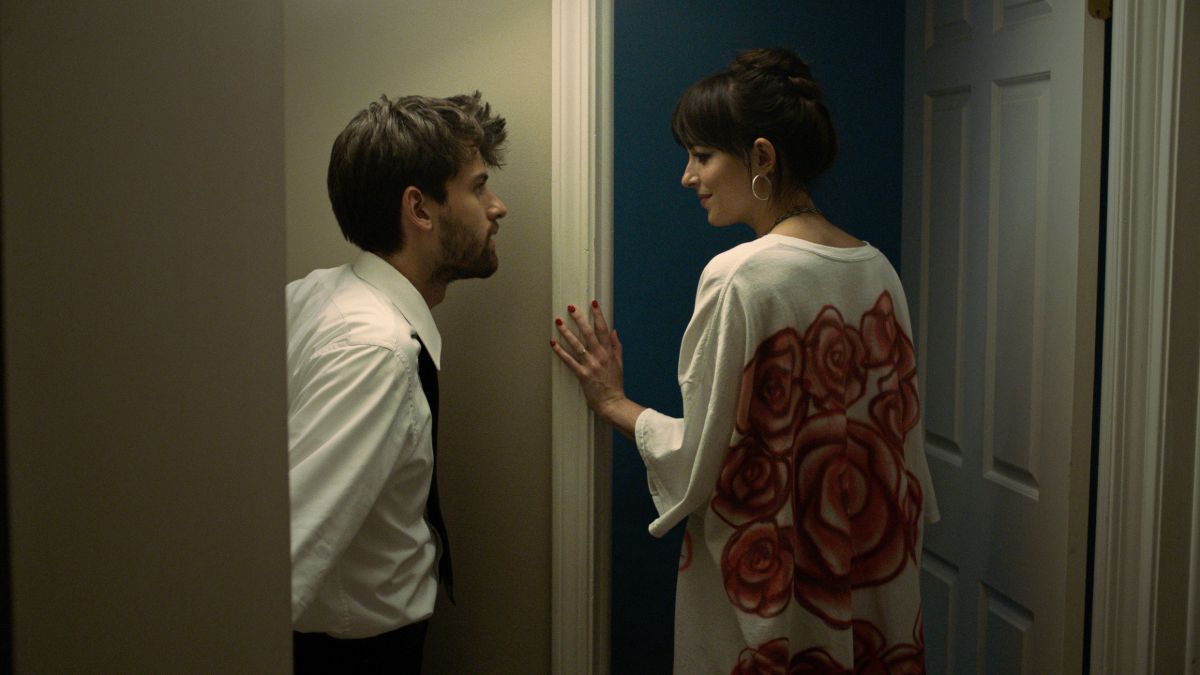 It’s not exactly cool to be the nice guy these days, but Cooper Raiff is making a good case for them again. In each of the 24-year-old’s first two movies, his sensible zoomer characters have the gift of being goofy, innocent, and naive. They wear their kind and confident hearts on their sleeves, even if they often breach the comfortable boundaries of social norms. Mostly they are empathetic, rid of the toxicity that makes vulnerable young men—and the movies they star in—sour and one-dimensional. That this young and perceptive writer-director is so emotionally honest only elevates the entirety of his humble, charming, crowd-pleasing work.

Raiff established this reputation in his breakout debut Shithouse, a college rom-com that won the top award at SXSW in 2020. Its Richard Linklater-inspired, walk-and-talk ethos supplemented Raiff’s authenticity and anxieties about the transition from home to college and struggles of seeing everyone around him adapt to independent life with much more ease. It makes sense then that his second feature, Cha Cha Real Smooth, spends its time focusing on the transition back home, where graduated peers have either begun adulthood in corporate and exotic places or reverted to questioning their life’s purpose. It’s a messy, liminal space that Raiff explores with a deeply kind movie about heartbreak and the obstacles to acceptance.

Of course, heartbreak and learning to heal are difficult processes, especially for 12-year-old Andrew. At a friend’s Bar Mitzvah he crushes hard on the reception’s “party starter,” a semi-DJ hype-woman that gets his peers to scream and shout on the dance floor. But he doesn’t become fully enamored until he spots her on a break in the stairwell taking a distressing phone call. Moments later she’s back smiling and leading a line dance, a professional switch that perhaps triggers the protective and loving instincts of someone that’s grown up with a bipolar mother (Leslie Mann). When the night ends, Andrew learns his brief romance with this older woman won’t ever come true—the start of an unfortunate and recurring cycle.

Ten years after this prologue, Andrew (Raiff) has graduated college and resigns to rooming with his younger brother (Evan Assante) in their stepfather’s (Brad Garrett) New Jersey home. Without much aim beyond saving money to visit his girlfriend in Barcelona, Andrew scraps hourly pay at a fast-food joint called Meat Sticks and returns to dinner questioning his mother’s new husband. But his fortune changes near the end of the summer when he agrees to plus-one a Bat Mitzvah with his brother. Loosened up and unselfconscious, he steals the show from a mediocre DJ and turns the night into a real party, prompting the tiger moms in attendance to convince him that party-starting could be his higher calling.

Indeed, considering his unbridled joy making tweens cupid shuffle, it seems an ideal match. There is an effortlessness in the way Andrew makes people feel warm and invited, an extroverted heroism compensating for a lack of inner ambition. It’s what catches the eye of Domino (Dakota Johnson, playing another mysterious mother), who eyes him from the reception hall’s corner table where she and her autistic daughter Lola (Vanessa Burghardt) sit and do activities. It doesn’t take long for Andrew to connect with Lola and coax her to the dance floor, making a lasting impression on both with his positivity, earnestness, and—when defending Lola against a bully—chivalrous behavior.

In lesser hands these introductory scenes could come off cloying and false, prone to hitting a specific note before accelerating into a flatter arc. But Raiff’s sensitivity and discipline allows the spark of courtship and promise of friendship to cohabitate effectively, relying on Johnson’s seductive, ambivalent eyes to steer the course of their undefined relationship. (I’m not sure anyone can depict maternal restlessness and sexiness better than her right now.) It’s a murky situation, mostly because Domino has a frequently absent fianceé (Raúl Castillo), and because Andrew is genuinely interested in spending more time with Lola, who he starts babysitting when Domino wants a night to herself.

When she returns, however, the night sizzles with a flirtatious energy that supercharges every time Raiff and Johnson lock eyes and hold their gaze, attempting to scope out the other’s intentions. Both have an attraction towards the other—Andrew believes she might even be his soulmate—but acting on their impulses at different stations in life has its own set of consequences. Maybe this teasing back-and-forth could get frustrating, but Domino’s unique family dynamic and Andrew’s own twentysomething insecurities prevent it from being the sole source of drama. Their relationship isn’t about love so much as whether pursuing it will provide them the same kind of happiness they’re currently enjoying.

It’s in these moments of doubt that Andrew attempts to fill a personal void: reconnecting with an old high school crush, snipping at his stepdad, and drinking to excess in the middle of party-hosting duties. These are small moments Raiff realizes have value—they give humanity and weakness to someone intent on pleasing others for most of his existence. In keeping with his character, such acts of defiance and ignorance come with their own reconciliation tour that provide some almost-too-neat, no less affecting closure.

There’s probably a tendency to label Raiff just another white filmmaker pounding out a familiar place on the Sundance and SXSW track. That’s one way to observe his quick ascent within the indie ranks. But it’s hard to find movies—no matter their scope—that grasp and depict the human experience with the kind of honesty and dexterity Raiff has committed to the screen so far. It takes real talent to transcend the demographic of his primary protagonists—to give inner life to the women, friends, and family members that make up his inner circle. It’s also hard to meet and exceed expectations. Throughout Cha Cha, Andrew resents being called a “kid” by various Jewish parents, and you can’t help feeling Raiff itching away a similar kind of designation as he keeps growing. I’m excited to see where he goes.