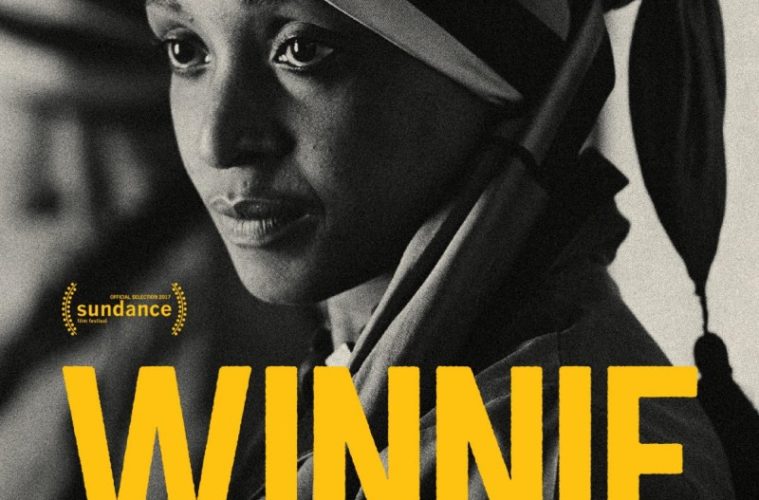 It’s difficult to truly capture a controversial subject in film. For a figure such as Winnie Madikizela Mandela, it may be impossible unless you ensure her perspective is included. This is a woman labeled terrorist by many countries, a wife who “tarnished” her heroic husband’s legacy. Yet the people of South Africa hail her as Nelson Mandela‘s equal—maybe greater. She was the on-the-ground leader of the African National Congress (ANC) when he and others were imprisoned or exiled, the one person who put her fist up in opposition without fear. She saw the carnage and violence first-hand and taught South Africans to match that level of brutality in order to survive. Outside the filter of her oppressors’ smear campaigns to criminalize her actions, Winnie was a general. This duality between “Mother of the Nation” and “war criminal” is what interested director Pascale Lamche. What if she could delve deeper than the media’s vilifying portrayal, gaining Zindzi Mandela‘s trust and eventually her mother Winnie’s? What if she peeled back the preconceptions and headlines outsiders projected upon this activist to learn exactly what role she played from those who were there? Maybe Lamche could reverse the rhetoric and adjust the history books or maybe she’d simply uncover the truth to be exactly what everyone already thinks. Either way it’s worth the attempt if only to put Winnie’s account on the record. And if headway is gained to re-contextualize her actions, an in-depth dissection of how it all went awry may prove even more intriguing and important.

The result is a documentary that could easily be described as one-sided. Lamche’s motives are to combat existing, entrenched notions about her subject and Mandela herself is hardly going to admit to any crimes committed explicitly or implicitly whether she was involved or not. What you have to remember, though, is that Nelson Mandela was hardly a saint himself. Some called him a terrorist when elected president of South Africa too. But this was a war where casualties were inevitable. Who knows what else he might have done if he were free to spearhead the revolution outside of jail? Who knows what Desmond Tutu would have been complicit in if he didn’t have to flee? All we can be sure of is that Winnie lived in the fire. Suddenly her legacy is painted as a revolutionary. She was regularly arrested, stayed in direct communication with the ANC’s armed forces branch, and inspired others to seek justice and equality despite their struggle. She became the strongest voice keeping Nelson Mandela’s name in the consciousness of Africans and citizens of the world as a man of peace and the man to lead their country out of Apartheid. In the twenty-seven years he was kept away from the people, his reputation blossomed as a result of her getting her hands dirty. It’s doubtful she was completely innocent—except maybe of the murder case much of the film portrays the police as spinning into a witch-hunt—but context colors her actions differently than those of a random criminal.

Lamche’s film’s greatest asset is its inclusion of Vic McPherson (Director of STRATCOM operations) and Niël Barnard (Head of National Intelligence Service) to give us a taste of the other side. They explain the surveillance, the Afrikaner position of Winnie being dangerous, and the way the press was used to tear her down and lessen her power. We hear about the coordinated attacks on her reputation and how they used her as a tool against her husband and the South Africans people. So there’s no mistaking the fact that circumstances in play were forcing hands on both sides. Violence begot violence and depending on your vantage point of that timeline—whether victims of the oppression or outsiders hearing about their rebellion—your reading of Winnie will certainly differ. I do think the filmmakers sought to overturn Mandela’s infamy, but don’t assume they fulfill that goal subjectively. Lamche focuses on certain incidents of egregious offense to highlight the uphill battle Winnie endured, but she never hides the imperfections. We believe McPherson and Barnard when they say Winnie’s politics were a motivating factor in holding Nelson captive so long. We believe they feared her with reason, that she was the face of the ANC and also a driving force behind its guerilla activities even if no one publically thanked her upon her husband’s release. Once freed, Nelson needed to embrace a position of leadership and hope for peace. Warranted or not, the assassination of her character ultimately ensured his ascension and a “peaceful” transition with some additional compromises.

The film therefore isn’t a definitive treatise as much as a long withheld alternate vantage point. Too many years passed wherein Winnie’s image was tainted by the politics of those who threw her under the bus with the South African Truth and Reconciliation commission. It’s easy to see the story ending there in an unjust circus, but it doesn’t. Winnie remains highly respected to this day, serving as a member of South Africa’s Parliament since 2009. This is our opportunity to hear her side and learn what she sacrificed and how she saw everything play out in real time. Hardly a pawn or blight, Winnie Mandela shines as a hero driven by evil to do what was necessary for justice. Leave her actions to be judged by God.