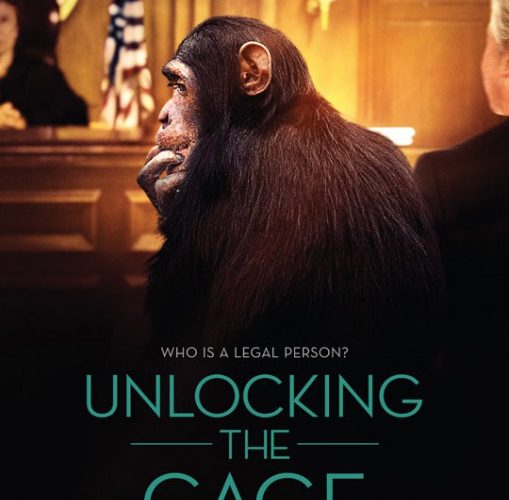 Revered documentarian duo Chris Hegedus and D. A. Pennebaker have been in the game long enough that putting together a reasonably engaging piece of work on an unlikely subject is old hat. In the same way, there have been enough documentaries about animal rights that audiences can accept nonhuman cognition and interiority as a given, without much need to rehash old scientific evidence. This is backed up in Unlocking the Cage, which includes a scene in which the characters discover a survey which shows that more than half of Americans believe to some degree that animals deserve at least some of the rights that come with personhood, rather than being relegated to the status of things for humans to do with as they please. In a straightforward but effective way, Hegedus and Pennebaker chronicle a multiyear effort to launch the first court case on behalf of a chimpanzee.

The lead character is Steve Wise, an experienced animal rights lawyer who wants not to demolish the rigid legal line between humans and nonhuman animals, but rather to open the first in what will be a long series of doors hopefully leading to the recognition of nonhuman personhood. To do so, he and his team file a writ of habeas corpus on behalf of several chimps kept in various private holdings or research facilities across New York. The logic goes that if a corporation or a partnership or even a sea vessel can be a legal person, then a self-possessed creature such as a chimp deserves to not be detained in substandard living conditions.

Though Unlocking the Cage walks the nonfiction filmmakers’ traditional path, shepherding its story along mostly through interviews, the sophistication of Hegedus and Pennebaker’s craft is subtly present. A less adept director would take the all-too-common route of rushing through each plot point, as well as take every opportunity possible to wallpaper the proceedings with infographics. Unlocking the Cage lingers on moments, especially images of chimpanzees appearing absolutely miserable in their cages. Story beats play out in conversation between characters as much as possible. It’s still a bit too verbal for my liking, particularly in comparison with Hegedus/Pennebaker’s last film, Kings of Pastry, which made terrific, even suspenseful use of quiet. But letting a narrative unfold in an uncluttered way is a skill that’s sadly lacking in too many issue-driven docs. This film is especially good at making courtroom scenes engaging, where many would hurry through the choicest soundbites before moving on to the next part.

Sloppiness only shows up in the documentary toward the end, when it doesn’t so much wrap up as it does sort of trail off. It was evidently time to stop shooting, even though the story hadn’t really been resolved yet. On the other hand, this perhaps fits into Unlocking the Cage’s theme that societal change is slow, and that legal victories in the quest for freedom are usually small and incremental — especially in a relatively incipient sphere like animal rights. To be a good activist is to accept this fact, even if it’s difficult to tolerate.

Unlocking the Cage premiered at the 2016 Sundance Film Festival and opens on May 25th.