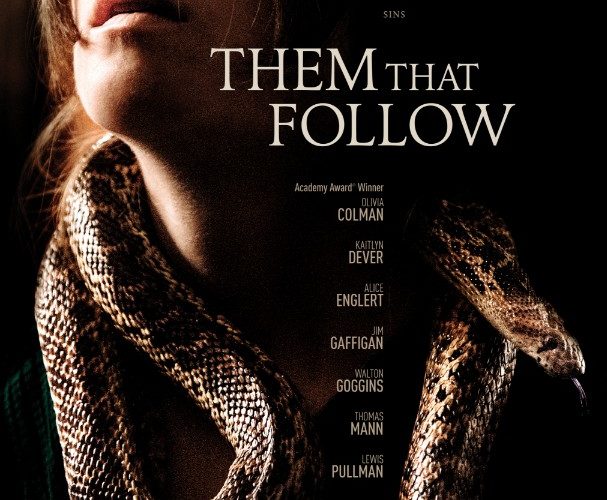 Sundance Review: ‘Them That Follow’ Plunges into a Stale Religious Nightmare

Snakes have long been fodder for cinematic nightmares, but combine them with oppressive Christian conservatism and you have an even more harrowing scenario. This sets the stakes for Them That Follow, which tells the tale of Pentecostal snake handlers in the outskirts of the Appalachian mountains and the faith-testing consequences they are faced with when one in their isolated circle commits a “sin.” Intended to be a character-focused, grounded look at this way of life, the drama can’t help but feel like it’s stuck in first gear until an over-the-top finale, when it’s far too little, too late.

Alice Englert plays Mara, daughter of Pastor Lemuel (Walton Goggins). While she attends their secluded service in a nearby barn and seems to follow the path laid before here, she holds a secret. She is pregnant with the child of Augie (Thomas Mann), who once was a part of their community but has since gone secular ways. Alice can’t just escape and shack up with Augie, however, considering his mom is Hope (Olivia Colman), a devout believer in their sect of Christianity. She exudes the kind of dead-eyed power we saw from the actress in The Favourite, but with a newfound fierceness, though is ultimately under-used. To make matters worse, Mara has also been set up by her father-approved congregant Garret (Lewis Pullman) with immediate plans to marry.

It’s the set up for a plot rich with God-fearing speeches and melodramatic intensity, but we always feel at a distance from the ensemble with the underwritten script from Britt Poulton and Dan Madison Savage, who also direct. Them That Follow could sell itself as a slow-burn drama, but there is no tangible burn to speak of. Lacking specificity into this strange subculture, the film takes a peculiarly hands-off approach in investing in its characters as if the filmmakers think we’ll immediately empathize with their situation even though we know so little about them. Brett Jutkiewicz (cinematographer of early films of the Safdies) brings a handheld immediacy to each scene, but it even feels like his camera is continually in search for something substantial to latch onto.

“We respect the serpent but do not cower to it,” Goggins tells one of his dedicated parishioners when they go in the woods looking for new rattlers to bring into the fold. This relationship with snakes gives the film the lifeblood that isn’t flowing through its main characters. The filmmakers are also sure to make quite a spectacle of their poisonous religious pets in the third act when this group’s blind faith in their God is truly tested. Recalling The Beguiled, the intensity is present but it has more to do with the manipulation of basic human sympathy than truly having a stake in the plight of our ensemble. All of these actors have shown range and talent in previous projects, but they simply aren’t given enough to sink their teeth into here. When all is said and done, the film’s biggest downfall may be casting Walton Goggins as a fanatical, snake-handling Pentecostal preacher (!) and having him tediously go through the motions. Them That Follow has a compelling hook, but what’s left is nothing but an unfortunately wasted opportunity.

Them That Follow premiered at the Sundance Film Festival and opens on August 2.