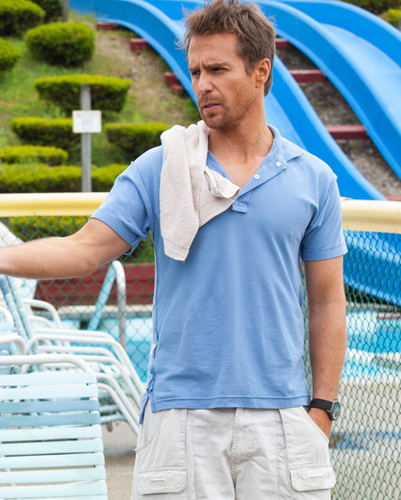 [Sundance Review] The Way, Way Back

The Way, Way Back, written and directed by Nat Faxon and Jim Rash, is the kind of independent film the Sundance Film Festival has become synonymous with: a widely-appealing, coming-of-age tale that takes place amidst a flurry of familial problems and quirky characters.

And though this type of description has become a stigma for many a film that has premiered in Park City, Faxon and Rash are smarter than the clichés they are utilizing in this narrative.

Duncan (Liam James) is an unfortunate 14-year old still trying to deal with his parents’ recent divorce, not to mention Trent (Steve Carell), the boyfriend of his mother (Toni Collette). Set at Trent’s beach house, Duncan quickly finds himself surrounded by adults who would rather not take care of him — this includes nice supporting turns from Rob Corddry and Amanda Peet as a lush couple — and a group of catty girls who look straight through him. There is also Allison Janney in the wonderfully ridiculous role of Betty, the resident alcoholic neighbor. She’s a walking disaster, and the audience is meant to love every minute it. Her daughter Susanna (AnnaSophia Robb), once one of the caddy girls, seems a bit different than the rest and takes a genuine interest in Duncan. You can see where all of this will go, and that is just fine. That the narrative here is borrowed from countless other summer camp/amusement park films from the last 30 years is a criticism mostly covered up by some top-notch character building from Faxon and Rash, who took home Oscars for their precious writing collaboration The Descendants. The plot may feel recycled, but the characters do not.

The real stand-out here is Sam Rockwell, playing Owen, the manager of the local water park who becomes a sort-of life mentor for Duncan. Determined to escape his family, Duncan gets a job at the park, aptly named Water Wizz. Rockwell moves and talks with a verve and wit reminiscent of Chevy Chase in Caddyshack. He moves and shakes both the lead character and the movie itself.

Sadly, Carell, playing against type here, and the conflict he creates for Duncan never rises to meet what’s happening at the water park. The more time Duncan spends at the park, the less he cares about the beach house and the girl, and the same goes for the audience. The film begins to spread itself a bit too thin, and Robb’s tender performance gets lost in the shuffle. The moment Susanna is introduced to life in Duncan’s new world, she once again matters and is allowed to shine.

All goes the direction these movies tend to go, the one stand-out scene in the third act being an especially heartfelt exchange between Owen and Duncan. The Way, Way Back may not be the reinvention of the cinematic wheel, bit it knows what it is and is good at what it is doing.