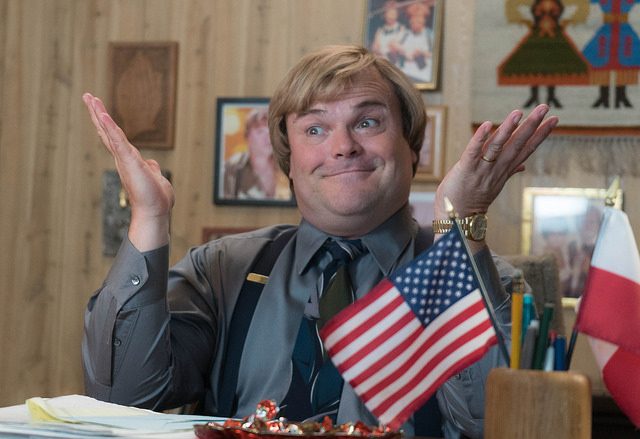 Kudos to Jack Black for trying new things. The actor seems to be on a mission to expand his comedic (and dramatic) palette with interesting turns in smaller fare like Bernie, The D Train and now The Polka King. Written and directed by Maya Forbes and Wallace Wolodarsky (also responsible for recent Sundance flick Infinitely Polar Bear), the film tells the true story of Jan Lewan, famed Polish polka singer and Ponzi scheme scammer in Pennsylvania (try saying that five times fast). Based out of a novelty store in Hazleton, Jan wraps himself up in the American Dream. Playing everything from weddings to county fairs and other senior citizen-heavy venues, his polka fanbase grows as he continues to expand the number of band members, much to the chagrin of friend and band clarinetist Mickey (Jason Schwartzman).

Jan is a untenable ball of ambition, determined to become rich and famous while remaining well-loved by all. It’s the thing his wife Marla (Jenny Slate) loves about him most, and the thing that makes his mother-in-law (a memorable Jacki Weaver) forever suspicious. ‘Where is the money coming for?!’ she asks. A good question. Sure enough, Jan believes in his own ego enough to sell his biggest fans on literally investing in him and his small businesses, promising returns of 12 percent and higher.

Adapted from John Mikulak and Joshua Von Brown‘s 2009 documentary The Man Who Would Be Polka King, Forbes and Wolodarsky do solid work in building the narrative around Black’s impressive rendering of Lewan. Sadly, the rest of the film is dwarfed by its lead performance. Slate, Weaver and Schwartzman put it fine supporting performances and there is much to laugh at throughout, but this telling of such a wildly true story sticks too close to its anti-hero. Take Slate’s Marla, a devoted wife who at one point gets tired of being referred to as “Mrs. Jan Lewan.” Her act of assertiveness is welcome and funny in the hands of Slate, but extremely sudden and ultimately a means to a crucial plot point involving her husband. Similarly, Schwartzman’s Mickey has a couple of quirks that come as quickly as they go. This is Jan’s story, and everybody else should be happy just to be there.

Lewan, both in real life and in this film, is the picture of relentlessness. Ultimately jailed for his crimes, he is out now and bigger than ever, thanks in part to coverage like this. He has promised to pay back all the money he stole from his fans and friends, somewhere around five millions dollars. The film is at its best when showcasing Jan’s ultimate dilemma: a desire to succeed and make everybody happy. It’s a noble notion, even in its worst moments. Unfortunately, we never get to really know the people in his life. Forbes and Wolodarsky are clearly fascinated by this character and all of his sins, but not those he sinned against.

The Polka King premiered at the Sundance Film Festival.