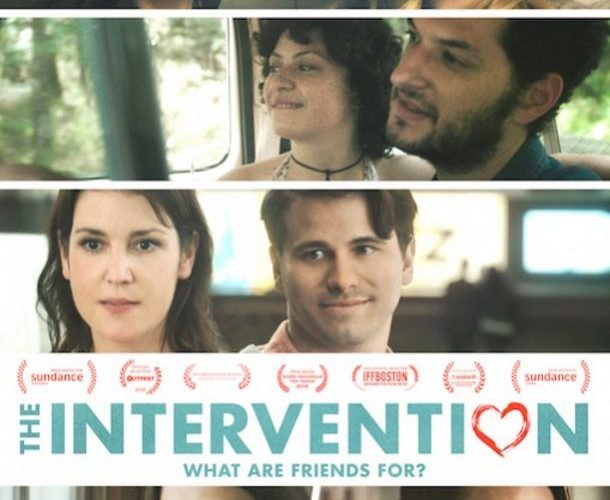 While The Big Chill certainly wasn’t the first of its kind, Lawrence Kasdan’s 1983 hit has become a cultural benchmark for the glut of features depicting a weekend outing between twenty/thirty-somethings in which insecurities are divulged amongst the entertaining banter. With their one-location setting and small-scale drama helping budget costs, Sundance seems to premiere a fair share of them. The latest is The Intervention, coming from actor-turned-director Clea DuVall, an enjoyable, if ultimately muddled character-focused diversion.

Jessie (DuVall) and her partner Sarah (Natasha Lyonne) have invited their friends to their family’s lavish summer home in Savannah in the hopes to confront Ruby (Cobie Smulders) and her work-obsessed, asshole of a husband Peter (Vincent Piazza) about getting a divorce so they can both have some peace. There to aid the intervention is also Annie (Melanie Lynskey), dealing with her own alcoholism and impending marriage to Matt (Jason Ritter). Providing the most comedic support (with an unexpected dramatic backbone) is Jack (Ben Schwartz) and his decade-younger girlfriend Lola (Alia Shawkat).

Also written by DuVall, it’s a sharp script with distinct observations helping it rise above the plethora of other similarly-themed fare. Peter’s infuriating disregard of his wife, along with connotations to domestic abuse, help to spur our involvement in wanting this intervention to succeed, as impeccably awkward as it is. Lynskey steals the show as she deals with her own demons, yet presents a bubbly outward personality in attempting to take control while rarely triumphing in these regard. She also nails the separation between romantic ideals and inner truth in a conversation about “wanting to want” an outcome, rather than genuinely believing it.

Polly Morgan‘s cinematography wonderfully depicts the beauty of the Georgia location, even if some of the framing can be distracting as characters are often relegated to one side with a great deal of negative space. For a film relying primarily on its script and performances, this choice feels unnecessary. While the score from Sara Quin, of Tegan and Sara, provides a mellow backdrop, the on-the-nose soundtrack — often spelling out the exact theme of whatever is happening — serves as a noticeable hindrance.

In her debut, DuVall presents a wide range of character dynamics, even if their outcome is a ultimately unfocused and some feel contrived to move the plot in a specific direction, namely Lola’s sexual advances on Jessie. For the most part, though, the build-up is an intentionally unwieldy one showing the many forms of love, and how the notion of it doesn’t always fit in a methodical box, much less a blissful one.

The Intervention premiered at the 2016 Sundance Film Festival and will be released on August 26.