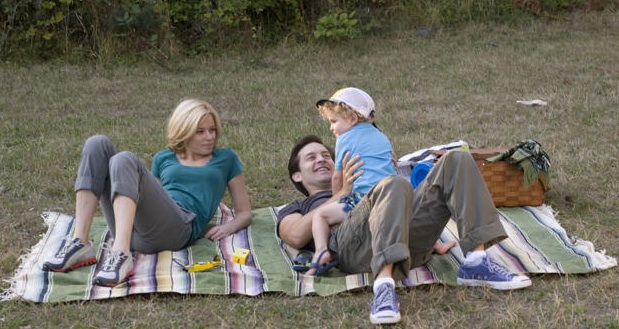 Dark comedies are tricky beats to master, in that you have to balance a fine line between keeping the humor on track with the twisted. When done correctly, for example the Coen Brothers’ A Serious Man, the results can be superb, but if mismanaged it can truly ruin what could have been something spectacular. Such is the case with The Details, directed and written by Jacob Aaron Estes (Mean Creek), a hybrid love and horror morality tale about the dangers of how one behaves in this world and the rabbit hole of consequences that can result in one single bad decision.

Tobey Maguire stars as Dr. Jeffery Lang, who after 10 years of seemingly idyllic suburban life, finds that both his marriage and mental health have become broken. One day he decides that he wants to create the perfect backyard lawn in anticipation of a second child potentially coming in the near future. However this vision of a perfect lawn is instantly compromised and terrorized by raccoons, who repeatedly tear up the grass. These raccoons serve as a metaphor for Lang’s animal behavior as his attempts to exterminate the rodents lead him into downward spiral of chaotic chain reactions.

There are some great performances from the supporting cast which include Elizabeth Banks (30 Rock) as Lang’s wife, Ray Liotta as Peter Mazzoni, a neighbor betrayed by Lang after he sleeps with his wife, Dennis Haysbert as Lincoln a down on his luck religious friend to Lang and Laura Linney as the crazy cat woman neighbor Lila. And while Maguire does he best to give Lang some layers and depth, he is constantly overshadowed by the other actors while his trademark deadpan delivery doesn’t do much for the films offbeat rhythms. The real show stealer is Linney whose neurotic persona brings life to scenes that are otherwise dreary and monotonous.

Estes, who is aiming to create an existential midlife crisis fairy tale, fails to make any correlation between the absurdist humor and the animalistic human nature of his characters. It’s a situation of finding the balance in tone, which when not achieved results in a lack of focus. Instead the film feels like a series of interconnected vignettes of modern life gone wrong that tries to outdo the next in terms of sheer ridiculousness. The Details yearns to be a deeper movie than it actually is and unfortunately is too quirky for its own good.