Sundance Review: The Assistant Captures the Soft Pull of Complicity 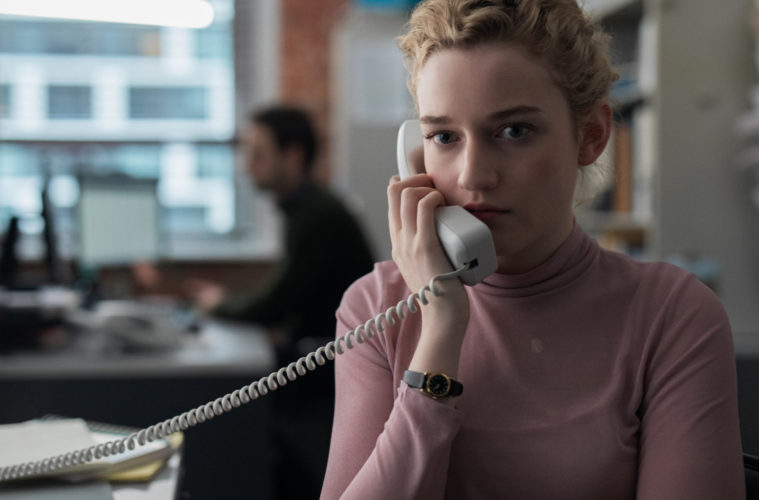 The silences last a lifetime in The Assistant, written and directed by Kitty Green. Starring Julia Garner as the titular character, the film plays out over one long day at an unnamed independent film studio. Light on dialogue with no real score to speak of, we follow our new assistant as she makes the coffee, cleans the dishes, prints the screenplays, and takes the phone calls for an unrelenting man in the office behind her.

Garner is effective, the camera rarely losing focus of her. This is an actress whose animated features tell an engaging story without needing much help. As she slowly accepts this world she’s living in, we relate to the ease with which she settles. Two executive assistants (Jon Orsini and Noah Robbins) do the bare minimum in looking out for the new hire, helping her compose shallowly-worded emails and instructing her on what to ignore.

And there is plenty to ignore. Green is not shy about the executive on which the man in the office is based. His power is an anchor that weighs down the entire building. Fellow executives roll their eyes at his lack of respect and excuse his predatory motivations with lines like, “She’ll get more out of it than he will.” Matthew Macfadyen shows up for one brutal scene, playing an HR manager who “explains” to Garner’s character how the world works. The writing here is impressive, building slowly and painfully.

An easy criticism would be that The Assistant has nothing to add to the conversation. This is a reductive take. As the #MeToo era burns on and burns brightly, it is only natural to desire every bit of related content to reveal something more. What Green is doing with her film is as important as any documentary on a specific person. In observing this one day of complicity, in never showing us the monster, the filmmaker paints a picture at a macro level.

Everybody has their own problems, their own worries. Everybody needs the paycheck at the end of the week. Nobody wants to make a fuss. This might read as obvious, but to see it play out on screen is quite effective. A scene towards the end of the picture in which our assistant calls her dad feels especially relatable. So often do we have conversations with our loved ones and say nothing at all.

One wishes there was a bit more to the narrative as a whole. Certain elements are introduced but unresolved, a victim of the single-day structure. That said, what does work works well. Here’s hoping for much, much more from Ms. Garner.

The Assistant screened at Sundance Film Festival and opens on January 31.