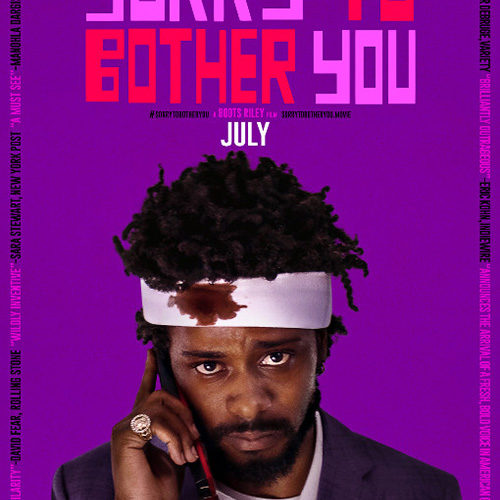 Sundance Review: ‘Sorry to Bother You’ is an Imaginative, Ambitious Satire for the Modern Age

Living a life of little means, when Lakeith Stanfield’s Cassius Green asks for a “40” fill-up at the gas station, he means cents, not dollars. His Oakland apartment, which he shares with his activist/artist girlfriend Detroit (Tessa Thompson) is actually revealed to be a garage, and due to faulty electrics, the door may open to the entire neighborhood during the most inopportune of times. So, when he gets a job as a telemarketer and his career is on the fast track for upward mobility, he must decide between a life of boundless capitalism or staying true to the struggles of his friends, who are attempting to unionize and challenge the very company who is making him rich.

Sorry to Bother You is a bold debut–in every sense of the word–for rapper-turned-director Boots Riley. There are truly radical, thrilling ideas both in the script and on screen, and also his boldness sometimes undercuts the character- and narrative-building aspects as we jump from compelling idea to idea. Mixing the droll comedy of Office Space with the race-backed satire of Putney Swope, and adding an imaginative dash of Michel Gondry (who gets a parody shout-out in an animated bit), at least something in Sorry to Bother You will surely strike a chord with any viewer, even if it doesn’t fully cohere.

As he pitches sales during his telemarketing job at RegalView, Cassius’ office mate Langston (Danny Glover) gives him the golden ticket for bringing in more sales: use his “white voice.” In a brilliant touch by Riley as this doesn’t mean just switching his voice, but rather he’s actually dubbed over by David Cross. It’s one more step to reach the status of power caller, which would bring him upstairs with the heavy hitters and new opportunities, including working for WorryFree.

Imagine Downsizing with a great deal more cocaine snuffed by its head honcho, you’d have this mega-corporation, which offers a way out of the economic pressures of life in more blatantly conspicuous means. Headed by CEO Steve Lift (a suavely slimy Armie Hammer), they promise a care-free living where you don’t have to worry about accommodations or food (which are both prison-esque), as long as you toil away like a slave for the company. When an opportunity presents itself to Lift to make even more money from this system, Cassius gets a peculiar proposition of the highest order.

If you’ve been blessed enough not to be spoiled further, we won’t lead you astray. Suffice to say, Riley shows his original voice by dropping in hand-crafted, imaginative touches throughout. During his telemarketing calls, Cassius is literally dropped into the locations of his potential customers in an inventive visual gag, then as he works his way up the socioeconomic ladder, objects appear to literally split in half and upgraded versions appear. He also attacks society’s predilection for inane media with the self-explanatory hit show “I Got the Shit Kicked Out of Me,” as well as a viral video featuring our protagonist. These bits feel a bit too repetitive and on-the-nose, but then again, perhaps that’s the point when looking at today’s media landscape.

Featuring a soundtrack made up partially of Riley’s own songs, and a digitally-influenced score by Tune-Yards, Sorry to Bother You does often signal the arrival of a fresh new filmmaking voice, even if the film overextends its welcome. As ambitious a satire for the modern age as another Sundance premiere, Assassination Nation, this film is more impressive because there’s a beating soul underneath the insanity that unfolds. Lakeith Stanfield, no matter how wild the situation he’s faced with, brings a genuine sense of bewilderment and inner conflict as his character is torn between what he thought his ultimate goal in life was and who he’ll have to disregard to reach it. Removed from this heightened reality, how can those left behind by corporate greed in the real world get ahead in life? Riley doesn’t offer a great deal of insight, but he clearly has a lot on his mind. Here’s hoping he retains this creative edge on a more focused follow-up.

Sorry to Bother You premiered at the 2018 Sundance Film Festival and opens on July 6.