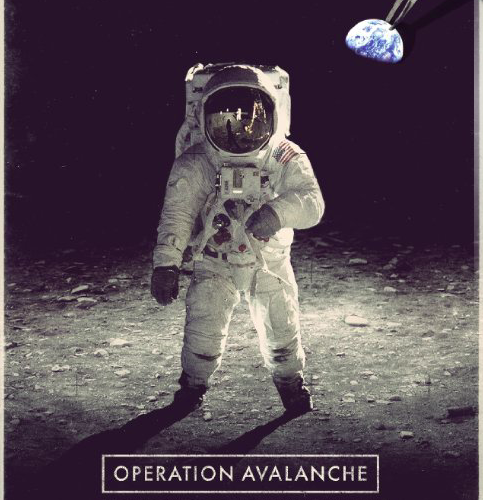 For all the criticism the found footage genre gets, like many a well-worn structure, there is still room to build. Operation Avalanche, from Matt Johnson and Josh Boles (The Dirties), aims to do just that and succeeds, for the most part.

In the late 60s, four young C.I.A. agents convince their superiors to send them undercover at NASA, posing as a documentary film crew. Soon they learn that the mission to the moon is in jeopardy of pushing past 1969, thus faltering on JFK’s famed promise. Led by the ambitious Matt (Johnson), the “film crew” conspires to fake the moon landing.

Perhaps the most famous of all American conspiracy theories, Johnson and Boles’ docu-style rendering of the non-event feels confident and quick. These filmmakers have a knack for pacing, readily cutting out any fat from a given scene to keep the proceedings raw and gripping.

And yet, there is plenty to gripe about, including some overly self-aware dialogue (‘Have you heard of conspiracy theories?’ ‘Yes, I think we’re in one’) and viciously silly narrative turns (an extended bit involving Kubrick’s use of front-screen projection did not work for me). Granted, these are small pickings when compared to the pair of lead performances from Johnson and Boles. The duo has wonderful chemistry and a knack for comedy, but there is a fundamental knowing-ness in both of their turns that distracts from the film as a whole.

Following a lagging middle portion, the film picks up sharply in the final act, offering up a surprisingly well-crafted car chase and a top-notch final moment. The 60s-era production design, courtesy of Chris Crane, is spare and easy to believe, not to mention the beautiful lensing from cinematographers Andrew Appelle and Jared Raab and the effective score from Jay McCarrol.

There is a palpable, Reddit-obsessed, audience for this kind of DIY thriller, and the filmmakers know how to serve them. Operation Avalanche is a solid piece of entertainment and a formal step up from their first feature. Where it lacks is in authenticity, too often feeling like an in-joke with no punchline.

Operation Avalanche premiered at the 2016 Sundance Film Festival and opens on September 16.