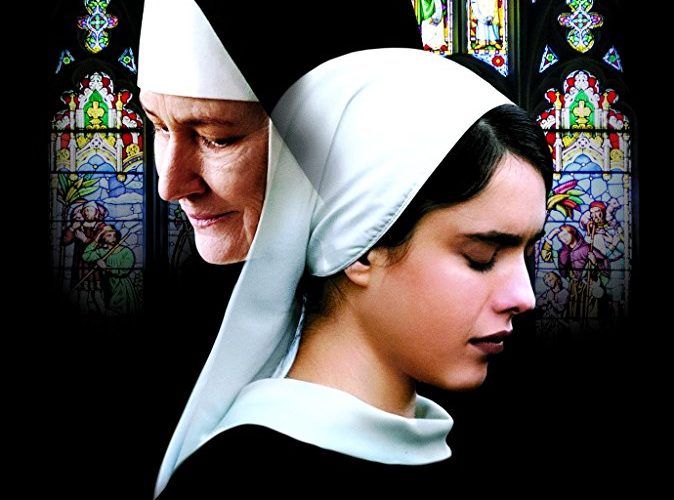 Written and directed by Maggie Betts, Novitiate is a rare behind-the-scenes look in a pre-Vatican II (1962) convent in the 1950s and 60s at a time of extreme social change. The equally harrowing and frank Novitiate, like Martin Scorsese’s Silence, is about the dangerous consequences and ends in which those that have heard the calling are willing to go. The drama traces the journey of Sister Cathleen, played in a star-making turn by Margaret Qualley (The Nice Guys), an America teen from a troubled family who attends Catholic school and becomes enchanted by the notion of an otherworldly love.

Novitiate’s brutality at the convent is grounded in a story that unfortunately proves to be the film’s weakest link with a too on-the-nose backstory involving her mother Nora (Julianne Nicholson) and father Chuck (Chris Zlyka). It’s a plot point the film sloppily speeds through on its way to its confrontation with the sinister Reverend Mother (a never-better Melissa Leo). Reverend Mother subjects the girls to cruel behavior before they become Novitiate, a second period of training before they take their vows, including crawling on the floor, flogging, starvation, and extreme repentance for the sin of smiling or being mildly vane.

Mass in English is welcome both as a transition away from these rituals and for the public in general, embraced by the more progressive nuns, including the kind Sister Mary Grace (Dianna Agron) who greets Vatican II with interest. Reverend Mother resists citing its existence as a betrayal of all that she holds dear and continues along with her extreme psychological treatment of Cathleen’s class. Cathleen meanwhile continues to make discoveries in a few passages that could be handled a tad more delicately as the film enters its third act.

Novitiate’s strengths include strong performances by Qualley and Leo, along with a superb supporting cast including Morgan Saylor, Liana Liberato, and Maddie Hansson as fellow members of Cathleen’s class, also subject to borderline torture in the name of building faith and character. Similar to the hazing drama Burning Sands, also screening at Sundance, those that are in power default to the standard response of “I also had to go through that” to justify the treatment.

What should be the film’s strength ends up being its weakness: a paint-by-the-numbers mother/daughter relationship in which Nora wonders why she went wrong, while warning her daughter early on against getting too involved with the church, viewing it as more or less a hobby. A stronger character investment up front would have led to a fuller character study as we watch Cathleen walk through the fire. While Silence took its time offering a slow build, Novitiate offers harrowing moments that could have had more impact with a slower tempo.

Novitiate premiered at the Sundance Film Festival and will be released by Sony Classics on October 27.