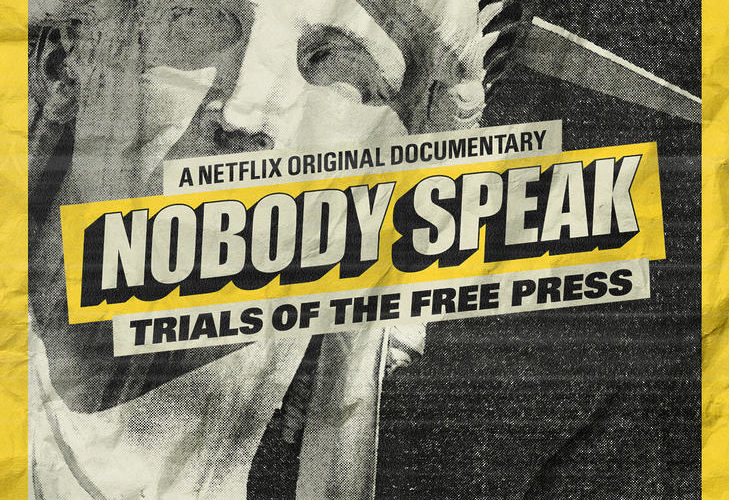 Sundance Review: ‘Nobody Speak’ is a Timely Warning from the Recent Past

Nobody Speak: Trials of the Free Press uses a salacious story and website as the launching pad to discuss where we currently are, so much so that I imagine director Brian Knappenberger — who uses footage from President Trump’s infamous press conference only a few days before the film’s Sundance premiere — may wish to stay on the story. Gawker, a site spun out of Gizmodo, was founded to share the types of stories mainstream news outlets would often shy away from, including celebrity sex tapes, outings, drug use, and allegations that have swirled but not picked up traction. They’ve featured Rob Ford smoking crack, Bill Cosby’s multiple accusers, Hillary Clinton’s emails, Tom Cruise’s prominent role in Scientology, and the one that brought them down: the infamous Hulk Hogan sex tape recorded for private use by Hogan pal and infamous Tampa shock jock Bubba the Love Sponge Clem, best known nationally for his stint on Howard Stern’s satellite channel. Bubba’s antics will no doubt some day be the subject of a documentary of their own, from his role in both the Hogan affair to his odd appearance in the David Petraeus saga.

Gawker, called by the late, great media critic David Carr the “mean girls” of journalism, had a low bar to print, eschewing the old standards and catching the ire of Trump loyalist and eccentric silicone valley billionaire Peter Thiel, whom the site outed in 2007 in an exclusive report with the headline “Peter Thiel is totally gay, people.” (You can see why Gawker had its critics.) Hulk, also known by his government name Terry Bollea, argued that his rights were trampled on and his lawyer, David Houston, sent Gawker reporter AJ Daulerio and editor Nick Denton a letter asking for the removal. The post contained a minute-and-a-half excerpt of the longer tape, which Bollea and his attorney were later allowed to “purchase” as part of an FBI sting.

Bollea and Houston try every which way to stick it to Gawker. He’s permitted to sue on the basis of privacy, citing that Hulk — a character who brags about his sexuality on Howard Stern and Bubba’s shows — is much different than the real Bollea. He argues that he does, in fact, not really have a ten-inch penis in his testimony. This defense opens Gawker up to criticisms regarding the value of its journalism. While the site lacks the purity of news institutions who are more measured (often waiting for Gawker to report before they do), the defense works. It ultimately haunts the site, Daulerio, and Denton when they are met with an unsympathetic judge and hit with a financially crippling judgement. Of course, this is all bought and paid for by Thiel, who bankrolls the suit, ensuring his attorneys rack up the billable hours while in Tampa to inflate an eventual settlement.

The picture across the country isn’t much rosier, specifically at the Las Vegas Review-Journal where John Smith, the paper’s star columnist, is taken off his beat covering the gaming industry. Already on the radar of Shelton Adelson, a billionaire contributor, Smith and team find themselves in an uncomfortable position when the paper comes under mysterious ownership and they’re told by a fellow who looks like a casino bit boss to do their jobs and not ask questions. As if that’s ever stopped a professional journalist before: the bravest of the team dig in, knowing their days at the Review-Journal will be numbered.

Knappenberger crafts a compelling and infuriating tale of big money flouting freedom of speech in an era where freedom of speech (thanks in part to social media) has become more democratized and, perhaps, more dangerous than ever. The story, though, is so fast-moving that Nobody Speak, as artfully crafted and timely as it is, may in fact be old news by the time Netflix releases the film — hopefully sooner rather than later. When White House officials are calling the press an opposition party, the ways that Adelson and Thiel have silenced career journalists may in fact seem quaint by next month. Nobody Speak is a loud, clear warning, and a fascinating exploration of where we were just as we entered the post-truth era. I fear the inevitable sequel.

Nobody Speak: Gawker, Hogan and the Trials of a Free Press premiered at the Sundance Film Festival and will be released by Nettflix on June 23.