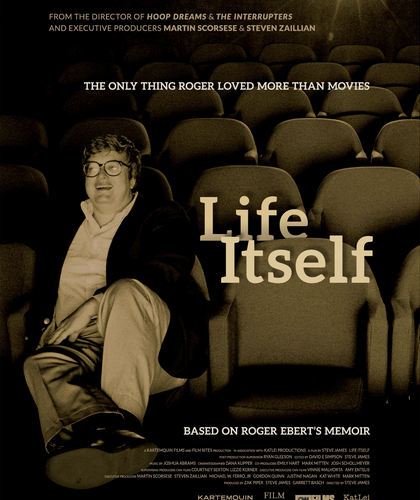 It’s only fitting that documentary filmmaker Steve James, of Hoop Dreams fame, was able to capture the iconic film critic Roger Ebert during the final months of his life. Ebert was one of the voices who championed Hoop Dreams and helped elevate it to a broader limelight, exposing it to audiences who very likely would have never heard of it — as he did with countless other films. It seems almost impossible for any film critic, filmmaker, or filmgoer not to have been in one way or another influenced by Ebert and his vocal opinions. Based loosely on his autobiography of the same name, Life Itself examines the man who was revered for his frank, direct, and articulate opinions on cinema.

After having several operations due to thyroid cancer and salivary gland cancer, Ebert was unable to eat, taste, or speak for the last several years of his life, relying instead on a text-to-speech program on his computer to communicate with those around him. It’s immediately heartbreaking to see the fragility of life on display as he painfully struggles day-to-day, being fed through a tube in his throat and going through difficult physical rehab in hopes of being able to walk again. Yet there is an enthusiasm in his eyes. His constant thumbs up and mannerisms reveal a man who’s still desperately clutched onto life. As scenes of him in the hospital unfold, loving wife Chaz Ebert by his side, James travels into the past, tracking Ebert’s path from a scholarly editor at his college newspaper to one of the premiere film critics for the Chicago Sun-Times. Interspersed throughout are interviews with some of the filmmakers he influenced, from Martin Scorsese and Werner Herzog to lesser-known artists whose lives were forever changed by chance encounters with the critic. Perhaps the most fascinating and revelatory moments come from interviews with close friends who knew Ebert better than anyone, painting him in real colors that do less to canonize and more to humanize him.

There are also fantastic sections about his rival and partner, Gene Siskel, who became his co-host on the nationally syndicated Siskel & Ebert at the Movies. From outtakes of them bickering during recording promos to classic arguments carried out while reviewing films, their chemistry is magical, and it’s amazing to see how their intellectual personas clashed. The documentary also isn’t afraid of tackling the issue of overly “mainstreaming: film criticism, as many other critics criticized him for reducing their art form to a simple thumbs-up or thumbs-down system. It also shows how Ebert evolved his persona once he became ill, using social media and his website to continue influencing moviegoers.

As the film heads toward an inevitable conclusion, it’s near impossible to not be bowled over by emotion. And, yet, the main takeaway here is Ebert’s unsinkable passion which lasted until the very end: he was a person who cared tremendously about the power of cinema as an art form, and that love will never die. Herzog refers to him as a true soldier of cinema and, by the end of this documentary, it’s hard not to agree with the sentiment. The power of his influence reverberates to this day with a new generation of online critics (myself included) who will remember and cherish his legacy for many years to come. Roger Ebert was an unusual outlier in the world of critics, and Life Itself is an honorable testament to how he shaped the world of cinema as we know it today.

Life Itself premiered at Sundance Film Festival 2014 and is expected to be released this summer. One can see our full coverage of the festival below.