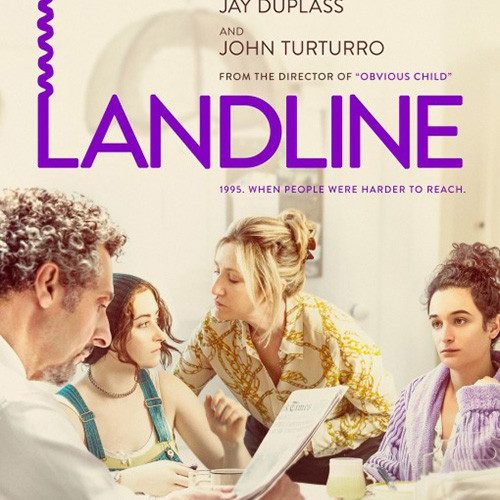 Although it was marketed as an “abortion romantic comedy,” Obvious Child went beyond that basic moniker, using the set-up to mine humor from the fears and anxieties tied with such a personal decision. Writer-director Gillian Robespierre and star Jenny Slate have now reteamed in Landline, a 1995-set drama about the dysfunctional lives of one family in Manhattan. Refreshingly scraggly in its structure and plotting, with an enormous heart and affecting honesty permeating every scene, it marks an impressive step up for the duo.

The Jacobs are a mess. The oldest sister Dana (Slate) is having second thoughts about marrying her good-natured fiance Ben (Jay Duplass), while her young sibling Ali (Abby Quinn), still in high school, sneaks off to party and experiment with drugs and sex. Things aren’t faring much better on the parental side, with their father Alan (John Turturro) feeling undermined by his wife Pat (Edie Falco), who isn’t aligned with his dreams of being a playwright. One day, while sitting on the family computer, on a floppy disk Ali discovers a secret bastion of sensual poetry written by Alan to his mysterious mistress. Eventually divulging this to Dana, the two set out on a mission track down the woman all while dealing with their own issues in life.

It may sound like the recipe for a clichéd indie dramedy, but Robespierre avoids this route by fully fleshing out her characters before they confront their infidelity or any other frailties. With its lively unfocused narrative, we get the sense we’re peeking into the scattered, most intimate moments of this family. Unsurprisingly, most of them happen in the bathroom, from peeing on a leg to sex in a tub to a moment of temporary resolve when mother and daughters have a cigarette break.

By setting in the 90s, Robespierre invokes the feeling of bringing to life a memory from the past and injecting it with a present-day style, courtesy of cinematographer Chris Teague, as well as a handful of anachronistic, but fitting song choices. Never reveling in nostalgia, the little bits peppered throughout, from Mad About You jokes to rocking out at the local CD store, feel authentic to the time and place. It’s also simply invigorating to have a relationship drama that isn’t about social media obsession. These characters need to hash out their differences face-to-face, which leaves more room for nuance.

Robespierre also knows the value of Slate’s warm appeal, with her distinct laugh enough to instantly cheer one up. As she rekindles a fling with her college beau Nate (Finn Wittrock), there’s never the sense Robespierre is judging her actions, presenting this relationship with as much chemistry as anyone else’s. We’re all flawed, so “let him who is without sin cast the first stone,” Robespierre effectively quotes. Also affecting is Alan and Pat’s arc, thanks to the perfect casting of Turturro and Falco. After decades together, they both physically wear the effort it takes to not only keep track of their daughter, but see if there’s any romance left between them,

Landline is a film about many things: sisterhood, infidelity, growing up, marriage, parenting, self-discovery, etc. That it manages to have illuminating insights about each, and none feeling like they are taking the backseat, is a feat unto itself. A moment of small reconciliation towards the finale, backed by Angel Olsen, conjured a few tears for this viewer. It was then that I realized how much I’ll miss these characters when the credits hit. For an hour-and-a-half, Robespierre opened her heart and showed the tenderness that a life in disarray can bring, and I’m grateful to have the opportunity to witness it.

Landline premiered at Sundance Film Festival and opens on July 21.