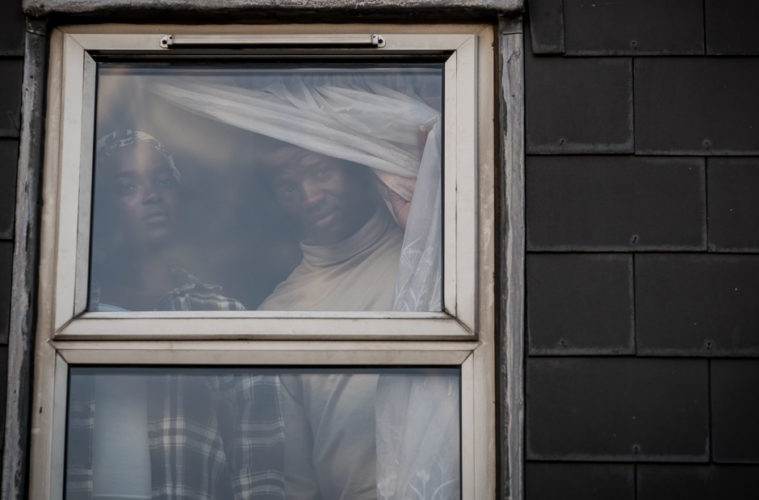 As Rial (Wunmi Mosaku) sits in a hospital, a doctor (Emily Taaffe) takes her blood and notices marks on her skin. One is on her arm; the other, the right side of her neck. The patient explains that her South Sudanese village had two tribes and, due to her not being part of just one, she wears both their respective symbols. Then her eyes lightly focus and she explains: “I survive by belonging nowhere.” There’s a lot of scary stuff going on in Remi Weekes’ feature debut His House, but the most thorough one is the idea that belonging and thriving are mutually exclusive.

Rial, as it so happens, has just immigrated to suburban England with her husband, Bol (Sope Dirisu). She hasn’t been particularly eager to assimilate. He, on the other hand, is much more so. “We’re good people,” he reassures British government agents (Matt Smith and Javier Botet) during a meeting with them. But no one seems to care about who these two are, what their character is. They just need verbal confirmation that Rial and Bol understand their conditions: that they’ll be living in a rickety house, and that their legal status prevents them from living elsewhere. The circumstances are hard to begin with, but it’s especially since they’ve just lost their daughter.

She was killed in a war that led to Rial and Bol seeking asylum and, without time to grieve, the couple is thrust into forging a new life while abandoning their own. There’s a lot going on in His House from the pressure of Westernized domesticity to the self-loathing that accompanies it. Add in some ghosts tracing behind their walls and the result is a debut as beautiful as it is chilling, even if it could have taken more time in the beginning.

It’s upon their arrival to England that His House jumps into its culture clash. The former endures racism that’s at once overt and internalized; the latter stretches his psyche by hearing things crawling through the walls. She tries to establish herself in the comparatively basic, economic ways while he attempts to socialize and partake in customs both Western and performatively masculine. Thankfully, this disparate between them is far from naught. The script from Weekes, based on a story from Felicity Evans and Toby Venables, hops between Rial and Bol’s respective experiences with a nice flow, juxtaposing them without ever becoming didactic.

And yet, Weekes’ script also allows and encourages its leads to confront their issues. Rial, for one, regularly voices her opinions on English tribalism without the film questioning or punishing her beliefs. Her statements also find a link between colonialism and masculinity, which, given the script’s structure of showing a custom only to deconstruct it seconds later, forges a dichotomy within the couple itself. They’re their own people in both actions and reactions, but they’re also opposing sides of the same coin through their quest for a new life.

But for all its topics, His House isn’t a difficult film to digest. It’s heady, sure, and it’s also nerve-rattling at points. That isn’t to say it’s arduous. This is often thanks to a pair of central performances that show palpable affection for one another almost as often as they confront their own demons. Mosaku takes full control of her scenes with a quietness that most performances could have easily confused for stoicism while Dirisu, keenly aware of his role’s contradictions, gives a dorky sense of humor that further humanizes Bol as a man and as a person.

It often makes for a beguiling experience. Jo Willems, regular cinematographer for Francis Lawrence, mixes soft lighting with hot color palettes to give some scenes a hypnogogic quality, and Frank Kruse’s sound design can be deafeningly quiet. With Weekes’ use of iconography in contexts both gorgeous and graphic, he finds a hegemony only to crack it open. He’s not all the way there as a filmmaker just yet—the 93-minute runtime rushes the first act quite a bit—but he has a lot to say. It’s exciting to see just what’ll fall under his eye next.

His House premiered at Sundance Film Festival and will be released by Netflix.