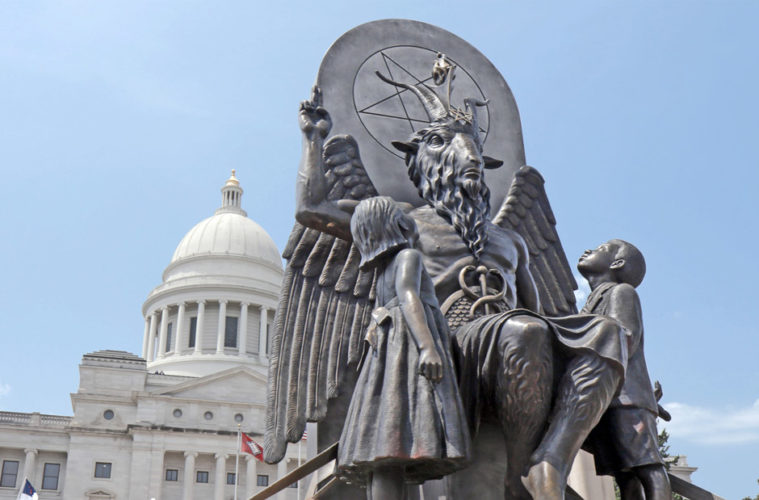 Sundance Review: ‘Hail, Satan?’ is, Surprisingly, a Celebration of Religion

Amusingly, Penny Lane’s documentary Hail Satan? is interested in clarifying one critical misconception about the Satanic Temple: its members don’t, in fact, worship the Devil at all. Rather, the organization—or religion, as they’d prefer to be called—is, essentially, an ultimately altruistic group of people, typically self-proclaimed misfits, who wish to highlight the double standards of the so-called separation of church and state—all while co-opting Satanic iconography to get a rise out of Christian conservatives.

Why Lucifer? Well… why not? Optically, it’s undeniably more rock-and-roll to have “Satanists” counter-protesting an anti-choice rally than it is to describe them as a bunch of godless activists, and Temple co-founder Lucien Greaves–not his real name—seems to delight in stirring the metaphorical pot, even if his demeanor is disarmingly calm. (That, and attending an “unbaptism” is kind of inherently awesome.)

Lane’s heads-up interviews with Greaves and other Temple members structures the film, but it’s the co-founder’s television spots on six o’clock news channels that reveal his work as a sort of lifelong performance artist. Sure, the Fox News anchors are keen on spinning the “Satanic” narrative, but the larger question remains: How can a group that sponsors a highway be “pro-evil?”

Answer: They aren’t. “The Satanic Temple holds to the basic premise that undue suffering is bad, and that which reduces suffering is good,” their website’s Frequently Asked Questions page reads, which is about as peacenik as it gets. “We acknowledge blasphemy is a legitimate expression of personal independence from counter-productive traditional norms.”

Indeed, like an extended episode of Nathan For You, Lane follows their continued blaspheming—including a Pink Mass make-out session on the grave of a Westboro Baptist Church founder—with years of footage, boiling it down to a subversive, devilishly tongue-in-cheek, often hilarious exploration of a grassroots movement.

Their cause is fought on public battlefields via compelling legal arguments, the most engrossing of which is the Oklahoma State Capitol building, which, in 2015, opted to remove a statue depicting the Ten Commandments following the Temple’s application to erect a statue of Baphomet in contrast. Point being: in a world of supposed religious plurality, a municipal center like the Capitol building should have representation of every religion, not just Christianity.

Or, preferably, none at all.

As such, I wasn’t expecting to hail Satan? as a celebration of religion. But there’s a deeper message here about the virtues of community and human connection. Intimidating as they may be, the Temple’s intentions are good; their mission and Seven Tenets are impossible to misinterpret (when a prominent member of the Temple goes rogue, it’s with refreshing alacrity that the Temple excommunicates them).

Praising science? Denouncing superstition? Valuing empathy? If eyeliner and I got along, I’d almost consider joining.