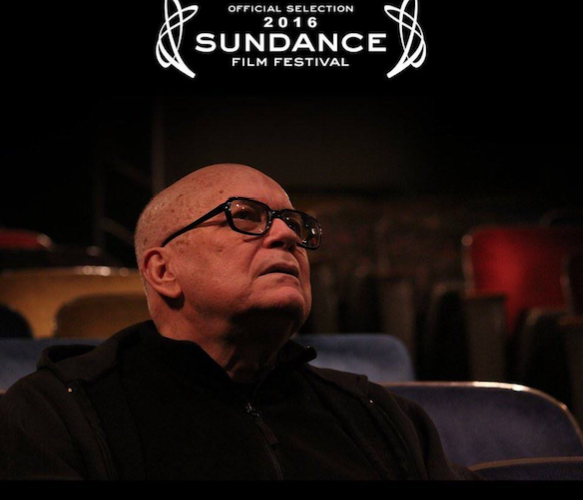 Perhaps the most inside-baseball of films at Sundance this year, JJ Garvine and Tai Parquet’s Film Hawk is an intimate look at film consultant extraordinaire Bob Hawk. Followers of Kevin Smith will know him as the man who discovered Clerks one Sunday morning in the bowels of the Angelika Film Center during the Independent Feature Film Market. (Here Kevin Smith provides his usually hilarious and often sincere commentary, often alongside Hawk.)

Checking in with luminaries and friends, Garvine and Parquet have constructed a loving tribute to 77-year-old Hawk, the openly gay son of a Methodist minister who joined the queer immigration to San Francisco in the 1970s, and later to New York. As it turns out, per Smith, Hawk is a Jersey boy at heart, as we discover in a heartbreaking passage later in the story. Hawk’s early interest included theatre prior to the discovery of independent – then known as “underground” cinema – and gay artists such as Jack Smith and Kenneth Anger. Hawk’s feedback shaped, amongst many films, the legendary Word is Out, an oral history of gay life collectively made by Peter Adair, Rob Epstein, Nancy Adair, and Andrew Brown. Later Hawk would become a de facto research assistant with a strong influence on Epstein’s Oscar-winning documentary The Times of Harvey Milk.

Film Hawk is strongest when living in the past, exploring Bob’s early interest in underground cinema as it evolved into “independent” film and eventually a business. With the arrival of players such as Miramax and Fox Searchlight, indie film almost became mainstream before evolving into the catch-all phrase “content.” The new business model, often involving zero-dollar up-front partnerships for simultaneous multi-platform releasing, is lamented by Hawk protégé Edward Burns, while Hawk doesn’t get too heavily into how the indie game has changed. Film Hawk’s weakest passages include a birthday-party scene complete with on-the-street interviews that out-of-place, early in the film.

The subject’s relationship to the filmmakers appears to be rather independent – Parquet and Garvine appear on screen during a “production meeting” at a local diner, with Hawk discussing what they need to finish the film. I wish they had more, perhaps with Hawk walking around Park City; the limits of the filmmaker’s resources are apparent — although apt, given the spirit of the picture.

Film Hawk is often enlightening when Hawk checks in with filmmakers such as Kimberly Reed, the transgendered director of her auto-biographical documentary Prodigal Sons, and Scott McGehee and David Siegel, whose relationship with Hawk goes back to an early short film prior to their feature debut Suture (1993) and Fox Searchlight-released indie hit The Deep End (2001).

Relationships are at the heart of the picture. Film Hawk, in some passages, checking in with cultural luminaries along the way. Garvine and Parquet include Smith, McGehee and Siegel alongside filmmakers Barbara Hammer and Barbara Rick. This is a modest portrait of a modest man, working behind the scenes, consulting with filmmakers at all stages, and back-channeling with festival programmers, critics, and influencers to, perhaps unintentionally, shape the future of media by giving a platform to the underrepresented and, in the case of Smith, filmmakers that had no idea how much what they were saying mattered.