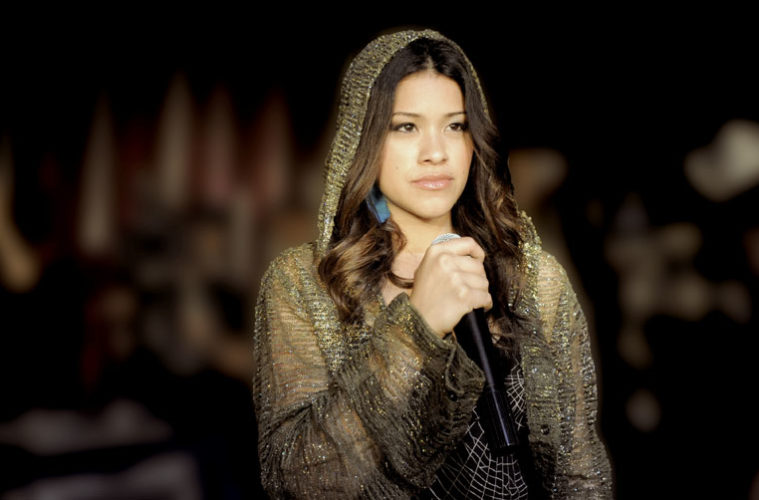 Filly Brown is a prime example of a film so full of itself that it’s painful to watch. The premise is a recycled concept, the situations and scenes are contrived and the acting is hard to swallow. It’s your basic MTV movie formula, this time a young MC with an unusual talent at spitting rhymes who must overcome adversary in hopes of freeing her incarcerated mom. On paper it sounds harmless, but it’s basic amateur mistakes that make it feel more like a made-for-TV film rather an honest contender in Sundance dramatic competition. This is an obvious buzz starter for its star Gina Rodriguez, who plays the titular character, but it fails with about every element. The weight rides on her shoulders but its just a shame that she is the one forced to carry the burden that is Filly Brown. The film opens in a radio station where a young Hispanic female Majo (Rodriguez) is about to lay down a freestyle under her MC name Filly Brown. Right as she’s about to spit her first verse the scene cuts to scenery of LA to hide the fact that Filly Brown does a lot of bad lip syncing. Instead of a real freestyle with soul and energy, an overly produced song kicks in while the people listening spout endless compliments in the form of ‘that was hot, yo!’. Quite the opposite, this is part of the problem the filmmakers seem oblivious to, over emphasizing the greatness of the content they are creating. Maybe it’s because they think the emotional pull of Rodriguez’s performance is is enough to keep you grounded but those sentiments usually register false.

As we learn more about Majo, we are introduced to a litany of secondary narrative threads from her father (Lou Diamond Phillips) who must deal with an overtly discriminatory real estate agent to her incarnated mom (Jenni Riveria) searching for a way out of prison through her daughter. Then there’s the lawyer (Edward James Olmos) who Filly wants to recruit, the out of control younger sister (Chrissie Fit), who is trying to hook up with a rival MC. It just keeps going and going, becoming more and more bloated until the film feels like its going to explode from too many plot threads. Perhaps cutting down on all these unnecessary and stereotypical relationships and focusing more on the one potentially positive trait  (Rodriguez’s performance), the film might have achieved a more balanced and nuanced tone. Instead you just can’t help laughing at how ridiculous some of these scenarios play out.

The filmmaker duo behind Filly Brown are Youssef Delars and Michael D. Olmos, the latter whose relationship to a certain other Olmos in the film is likely one reason why it’s playing at Sundance. It’s a real shame to think of the other contenders who were overlooked in programming because they didn’t have the same celebrity cameos as this one does. Unfortunately this is proof of politics getting in the way of festivals, leaving a film that would have substantially benefited from more sincerity.