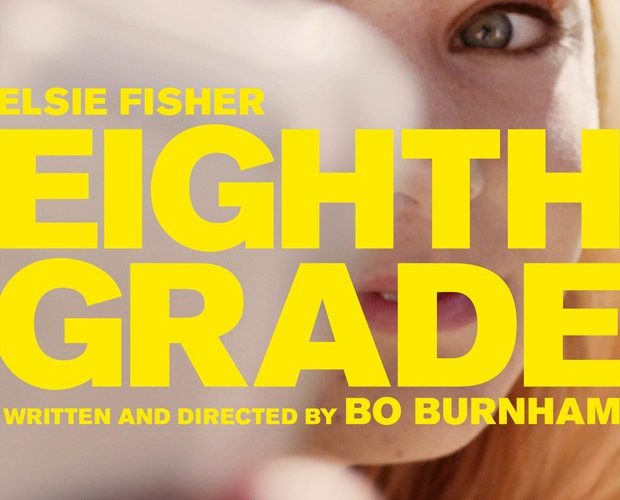 If comedy is best pulled from trauma, there are few moments in one’s life more distressingly rich to mine from than middle school. Comedian-turned-director Bo Burnham, now more than a decade removed for proper reflection, depicts the specific time period with all the spot-on crippling anxiety and all-consuming awkwardness in his modest but affecting directorial debut Eighth Grade.

Having been bestowed the superlative of Most Quiet, Kayla (a perfectly cast Elsie Fisher) has just a week left until she can leave middle school behind. Although she stays nearly silent at school–outside of a few under-the-breath utterances of agreement when the most popular kids walk by–her outlet can be found online. “No one uses Facebook anymore,” as one character exclaims, which leaves every waking hour available to scroll through Tumblr, Snapchat, Twitter, Instagram, Buzzfeed, etc. Kayla’s most personal digital expression can be found on the same platform where Burnham got his start: YouTube. Publishing motivational videos of sorts about confidence and being yourself–stickers of which line her bedroom mirror–these also serve as occasionally contradictory voice-over to what we’re seeing on screen, a perfect encapsulation of real life vs. digital swagger.

Burnham’s comedy has always been adept at exploring human insecurities, so it’s no surprise he zeroes in on the overwhelming emotional vulnerability that afflicts young teens. For Kayla, it’s not so much that the more popular kids bully her, but rather it’s a lack of self-esteem that drives the pathos of the drama. In what can only be described as a terrifying sequence, Kayla looks out the window of the pool party she was initially invited to by the mother of the school’s beauty queen. As Anna Meredith’s synth-heavy score pumps in the background, fellow students are having the time of their life, completely ignoring her, but in Kayla’s eyes, they can only see her as she walks down to the party and jumps in the pool. Soon after, she’s by herself in the next room calling her dad to pick her up.

As a single parent, her dad (Josh Hamilton) is deeply proud of his daughter, wanting to genuinely connect with her, even when she’s absorbed by the glow of her phone. (The device is such an obsession for Kayla that when it comes to a broken screen, it’s akin to having broken eye.) Always a voice of calming reason, Kayla’s father has a sheepy, good-hearted dorkiness, even though a third act scene of compassion becomes overly preachy and obvious when compared to the more focused drama beforehand.

When the opportunity to shadow a high schooler comes about, Kayla is introduced to a senior (Emily Robinson) and they hit it off, becoming friends–at least for now. By expanding the scope in this way, Burnham shows how much one’s morale can shift by adding some perspective. On the flip side, he also displays the many more upsetting experiences yet to come on an entirely different level. Perhaps the scariest thing about Eighth Grade is how much more complicated and paralyzing the sequel would be.