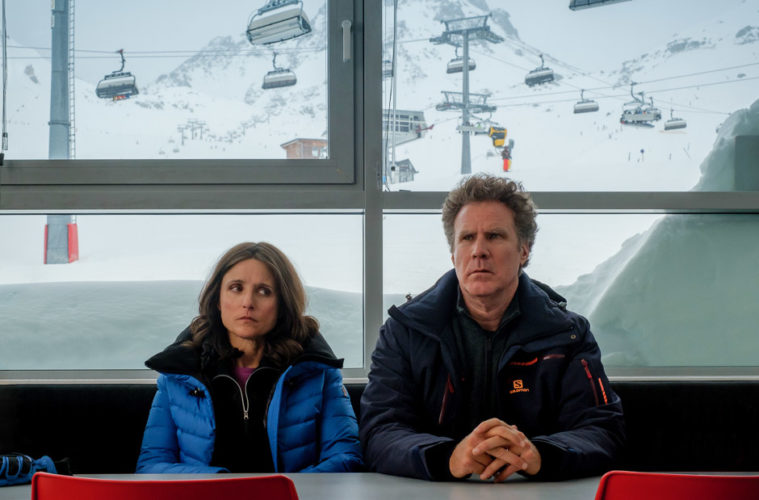 The inciting incident of Downhill takes place on the deck of a ski resort in the Alps. In the midst of lunch, a family of four watches a controlled avalanche tumble towards the outdoor restaurant where they’re eating. It continues growing in size and severity, and those around them begin panicking and ducking for cover. The family’s father follows suit, grabbing his phone off the table and running for safety, leaving his wife and two sons to withstand the arctic blast. The quick whiteout ends up being a false alarm, but the real damage has just begun.

If that momentous scene sounds familiar, it’s because it already exists. Directors Nat Faxon and Jim Rash, collaborating on a script with Succession creator Jesse Armstrong, have Americanized and remade Ruben Ostlund’s 2014 black comedy Force Majeure. Which is to say they have brought in two comedy heavyweights in Will Ferrell and Julia Louis-Dreyfus, watered down an original story about masculinity and softened the darker realities and fallout of a cowardly decision. The updated version proceeds much like the small avalanche—ultimately harmless and capable of much less danger.

Even though Faxon and Rash pay their respects to the original—sometimes mimicking specific scenes and capturing the claustrophobic feel of the family’s mountain resort—it would have been a stretch to expect a movie that captured Ostlund’s tone and subtlety. Like the duo’s first movie, The Way Way Back, which also premiered at Sundance in 2013, Downhill brings in a healthy amount of levity that prevents even the more dramatic and contentious moments from straying too far down their potentially darker paths.

For Billie (Louis-Dreyfus) and especially for Peter (Ferrell), who lost his father eight months prior and remains attached to work and social media through his phone, the family vacation is needed. But after the climactic scare, their time together only fuels more distant behavior and hidden resentment—an unspoken awkwardness fills their hotel room and daily ski outings. The kids (Julian Grey and Ammon Jacob Ford) don’t trust in their father as a protector, and Billie can’t grasp her husband’s instinctual response to danger. In this “Ibiza of the Alps,” a lodge without any other families, Peter aims desperately to dismiss any cause for discord in his own.

The gauntlet is thrown when Peter invites his colleague Zach (Zach Woods) and his girlfriend Rosie (Zoe Chao), passing through Europe, over for dinner. Inside the hotel, they quickly become a couched jury for Billie and Peter, who relay different stories about their lunchtime adventure until Billie eventually pulls her sons in as key witnesses to testify against their father. It’s the most heated scene, and both Louis-Dreyfus and Ferrell flex some of their dramatic chops to show the extent to which this pall hangs over their relationship. It’s the kind of moment that suggests these two actors might have been willing to go where Force Majeure’s Lisa Loven Kongsli and Johannes Kuhnke had gone before them.

Despite its safer bets, Faxon and Rash have made a fine movie—perceptive, sensitive, and inoffensive. You can see the craftsmanship of their backdrops and exterior montages, the thoughtful blocking, and their signature light humor. But they aren’t interested in taking risks. That doesn’t make their decision to remake Force Majeure wrong, it just means it doesn’t feel all that necessary.

Downhill premiered at Sundance Film Festival and opens on February 14.