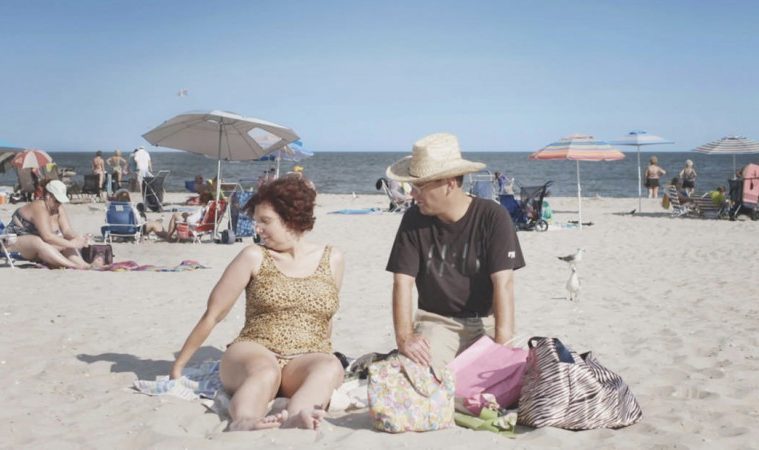 Sundance Review: ‘Dina’ is an Intimate, Questionable Portrait of Love

A tender love story, Dina is a documentary that could easily be mistaken for a fiction film. Framed in long takes, often on a tripod, several choices other than its style call the film’s legitimacy into question, including a key moment which occurs in the film’s third act that leaves one wondering if directors Dan Sickles and Antonio Santini are playing fair. The film, up until that moment, is so engrossing that as manipulative as it may appear, I’m willing to forgive the choice of pulling back the curtain a bit on a moment that’s offered up with little context.

The story of Sundance’s Grand Jury Prize winner follows Dina Buno, a 49-year-old living on disability, suffering from a neurological disorder, and her courtship with Scott Levin, a Walmart greeter with Asperger syndrome. The filmmakers arrive after Scott proposes to Dina at a Red Robin, following a movie date at their local mall. Dina reasonably has some reservations about what Scott is able to give her and the film offers a frank discussion on taboo topics, including money and sex.

Dina remains a somewhat questionable portrait of the couple, framed in the Academy ratio with conversations shot in long takes by Adam Uhl. The film lacks a rough and ready quality as the filmmakers allow each take to play out for minutes on end as if only pausing to reload the camera’s magazine. The effect reminded me most of Errol Morris’ quirky early work as this summer in Philly is rendered in the same muted pastels of his Vernon, Florida. The characters are equally as quirky: she’s a fan of the Kardashians and reality TV, while he jams out to (former) Christian light-metal band Evanescence on his bus ride to work.

Dina is engrossing as it observes the couple and a few of their heartbreaking struggles, including a day trip to Ocean City, New Jersey where she gives him a copy of “The Joy of Sex” to break the ice on a topic that they’ve never discussed, despite the emotional intimacy thats apparent in conversations and foot rubs. Recalling Julie Sokolow’s Aspie Seeks Love and Roger Ross Williams’ slightly less interesting Life Animated (exploring how a well-off family with many resources deals with autism), Dina is a grounded portrait of two characters living with little means, discussing their annual incomes as they imagine what a combined life might be like.

Directors Sickles and Santini do occasionally, and perhaps distractingly, find the humor of some of these situations, including the juxtaposition of Dina and Scott’s bachelorette and bachelor parties: his involves bowling, hers a lap dance from a stripper who works to accommodate a guest’s bad leg. Dina is a sometimes uncomfortable film to watch, especially as we wonder how certain moments were constructed: is this a performative piece or vérité? And does it matter? We can’t forget Robert Flaherty was a kind of con man in his own right. Dina will certainly provide fodder for discussion on documentary ethics, but what I do appreciate is its simplicity. It invites us in, allowing us to not only eavesdrop but intimately connect with folks we may not otherwise get to know as we pass by them in Walmart or on the bus.

Dina premiered at the Sundance Film Festival and will be released by The Orchard on October 6.