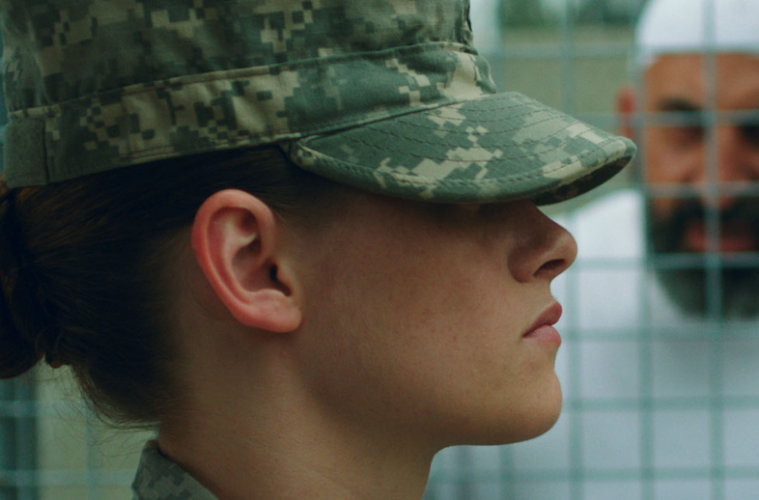 There’s a noble attempt in Camp X-Ray, written and directed by Peter Sattler, to make a war movie that’s about individuals rather than ideals. Set in Guantanamo Bay, the film is essentially a long conversation between Private Amy Cole (Kristen Stewart) and a GITMO detainee named Ali (Peyman Moaadi).

Cole is green, newly transferred to the station. Ali, on the other hand, has been held by the United States for nearly a decade. What begins as a long-form test of Cole’s patience by Ali, who’s already got a history as a uncooperative detainee, slowly morphs into something deeper.

Sattler keeps most all of the action within the cell block where Ali is kept. And though Cole is warned repeatedly by her commanding officer (Lane Garrison) not to surrender any personal information to any detainee (he also makes clear that they cannot be called ‘prisoners,’ because prisoners are subject to the Geneva Convention), she soon lets her guard down with Ali.

Stewart does good work as Cole, building a character whose tough exterior is still forming. This is a soldier who wants to be tough but not for no reason. Her natural intuitiveness clashes against the mindset of those institutionalized within GITMO, as represented by Garrison’s Randy. These two play well off each other, representing two sides of a moral issue while working as individuals all there own.

Some of their fellow soldiers are not quite as lucky. Sattler’s script, despite smart exchanges between Cole/Ali and Cole/Randy, introduce some side characters as a means to reflect the changes Cole is going through. Take Joseph Julian Soria‘s Private Rico Cruz. When we are introduced to Cruz, he’s a soldier who’s overly sympathetic to the plight of the detainees, getting reprimanded for his softness. Experience then breaks him down and builds him up, Cruz evolving into the man GITMO wants him to be. This would be an interesting transition, but his character only exists to further define Cole’s dynamism. Who is Cruz? Where is he coming from that he’s so naive to begin with? Sattler doesn’t seem to care, so it’s hard for us to care.

Ali, on the other hand, is very well defined. This is a masterful performance, Moaadi taking Sattler’s words and direction and creating someone extremely memorable. As the film moves to the third act, we believe in Cole’s belief that Ali is truly a good man. Sadly, Sattler is not content in letting his characters convey this on their own. The final 15 minutes betray the first 100, hammering all themes into our skulls. It’s an unnecessarily on-the-nose finish to a mostly organic central relationship. Let’s hope there’s another cut to come that will show a bit more faith in the story being told.

Camp X-Ray premiered at Sundance Film Festival 2014. One can see our full coverage of the festival below.